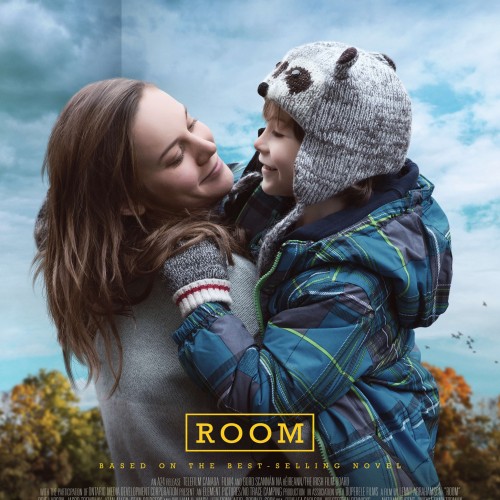 Just out of curiosity, I wonder how many people will try to watch this film, accidentally mistake it for the Tommy Wiseau film ‘The Room’ and watch in disbelief as ‘Room’ wins multiple awards and garners universal praise, wondering how such a hilariously terrible film can win all of the awards. Such an incident would be a tragedy as ‘The Room’ is often described as ‘the Citizen Kane of bad movies’ whereas ‘Room’ can be described as a modern masterpiece.


Having been abducted several years ago, a woman (Brie Larson) is held captive in a small room along with her young son (Jacob Tremblay), who has never seen the outside world, existing only within the small room he occupies. Repeatedly abused and suppressed, the mother plots to escape from their prison.


That description makes ‘Room’ sound more like a thriller (something that Denis Villeneuve would direct maybe) but it really isn’t. To say that it lacks tension or terror would also be untrue as it blends those elements into it seamlessly, but the film draws strength from its catharsis. There are moments of in which it is gruelling to watch, as if you don’t want the film to continue out of fear of what happens next. The reason is because the film so brilliantly establishes its two main characters very early on. I creates an endearing connection between the two and you clearly get an insight to this impenetrable bond between them and how neither can survive without the other.


‘Emotionally impactful’ seems too simple a phrase to describe the effect ‘Room’ had on me. Watching this film is almost an exhaustive process as your feelings are wrnched around so frequently and to such great effect that I can honestly say that no other film of 2015 (because even though it’s only just arrived in the UK it counts as a 2015 release date) has had a greater impact on me, not ‘Spotlight’, ‘Steve Jobs’ or anything else. Does that make it my favourite film of the year? Perhaps.

In one sense ‘Room’ is a story or survival and perseverance. It dedicates itself to asking why a person would continue to fight against insurmountable odds and then answers that question in beautifully simplistic and compassionate manner, because other people need us. In this instance Larson holds onto Jack as a way to carry on struggling. She is resourceful enough to cobble together toys for him, educate him and ensure that he is kept away from the true horrors of their encapsulation. When Jack catches glimpses of this horror we see it from his own limited perspective, which actually makes it even more unsettling.


It’s unsettling for a number of reasons beyond just the obvious ones because we care about Jack’s well-being, we can see his innocence and the best laid plans of Larson slowly fading and because we believe is his character completely. Jason Tremblay achieves an astonishing goal here (that most grown actors struggle to achieve) as it never seems as if he is performing. He is a real person, captured on film in front of us. Acting does not feel like the word to describe it, truthful might be more accurate.


But what about Ma herself? Brie Larson has had a fairly unique career in how she switches so effortlessly from comedy to tragedy. I’ve seen her in ‘Scott Pilgrim vs the World’ and ‘Trainwreck’ but then I’ve seen her in ‘Short Term 12’ and if you’ve seen any of those films you know what a change of trajectory that is. In this film though the rawness of her performance is almost beyond belief, it is so utterly compelling that when she struggles and suffers it is painful to watch. But there’s an endearing sense of hope that permeates the performance and we can only watch in awe as she dares to hope and dream against the monster that incarcerates her. Oscar for Best Actress? If it doesn’t go to Larson I will consider it a travesty.


You may think you have the film sussed by now, you know the gist of it and are unprepared for shocks to come. But there is a whole act of this movie that may take you by surprise and it may be the most heart wrenching of all, the toughest to watch and the most elating part of the film. I don’t want to spoil it for the risk of robbing you of the chance to experience it. What Lenny Abrahamson does with such a limited space is amazing, he constantly finds new ways to view an 11 by 11 box and the glimmers of the outside world are filmed with such a sense of distance and surrealism that within a few minutes, you feel the mother and son’s plight so strongly that it is almost painful.


Emotionally endearing beyond belief, supported by two beautifully truthful performances, and superbly directed, ‘Room’ is simply masterful (just be careful not to add ‘The’ to the title).