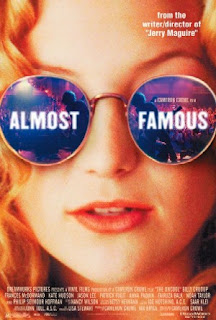 If there’s any movie world I would want to live in, it would be that of ‘Almost Famous’. Cameron Crowe’s semi-autobiographical film that adapts the time he spent as a journalist for Rolling Stone Magazine into the story of William Miller following the fictional band Stillwater is one of those rare films that balances its entertainment and emotional resonance with a deep thematic message that is frighteningly honest. On the surface it is about rock and roll, coming of age and is generally a good time. When Roger Ebert reviewed the film way back in 2000, the first thing he had to say was how joyous it was.


It’s not hard to see why. The mix of humour and nostalgia for an era of music gone by as well as then authenticity towards all of it. Crowe’s film comes from a place of honesty, genuine details that help forge the environment and everything within it that could only be crafted by someone who was actually there. It does not surprise me at all to learn that many people who watch the film for the first time believe Stillwater is in fact a real band. I think that is part of what makes the movie so endearing, this authentic feel to not just the environment but the characters and their very essence all feels so truthful.


An example that always stands out is the way William looks and reacts to Penny Lane throughout the movie. He never takes her attention lightly and never casually reacts to what she has to say to him. When you’re a teenage boy with a crush on a beautiful girl her affection isn’t something you nonchalantly accept. When he sneaks a kiss from her it’s not done in an instant, it’s a huge step that he has to psyche himself up for. During the films iconic Tiny Dancer sequence, Penny rests her head on his shoulder and rather than just ignoring it William glances over to her and seems to forget everything else around him. It’s such a brilliant dose of reality.


What makes that dose even more refreshing is the fact that the scene in question, as well as most of the film, is in a place free from reality. Only a select few of the characters have any grasp on what is real and genuine. They each try to project an artifice to the world around them, which is something everyone does but no one more than rock stars. Stillwater obsess over their image and identity, they strive to be connected to their fans so long as those fans see them as being above them. Their greatest fear is that William’s article will expose them as the flawed humans they are. They are worried about being uncool.


Therefore their strategy is to make William feel cool. As Lester Bangs warns him earlier in the film, the band make William feel like he belongs, as if he too is more at home in this world detached from reality. If I can recall that Tiny Dancer scene again (which I will because it’s awesome) William is told by Penny that he is home. Here, surrounded by hungover rock stars who solve their deep seated issues with one another via signing. To be cool in this world is to be dishonest, and the people who are honest are the ones considered uncool. In a movie where William is told by his older sister that “One day, you’ll be cool”, being cool suddenly seems so important. 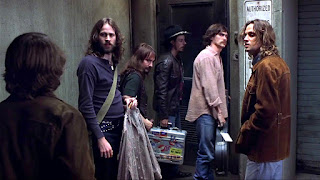 Case in point, of all the characters that fit onto the spectrum of cool the movie makes it clear that the character furthest away from being cool is William’s mother. She’s the most honest character in the movie, stating exactly what is on her mind at all times, whether the person listening likes it or not. It’s easy to dismiss her as being an oppressive force when we first see her but in a lot of ways she becomes the movie’s most empathetic character. Thanks to Frances McDormand’s endearing performance we see what amounts to a mother coping with her son no longer being under her watch. She only wants what is best for him and yet she fears that in doing so she has pushed him away. That’s not to say I, nor the movie, thinks she is right in how she views the world but she should not be dismissed as being wrong straight away. As much as we like to marvel at the lyrical genius of this music, her claims that it’s fuelled by drugs and sex are not exactly wrong either.


It also stands in stark contrast to the performance of Billy Crudup, who is so far detached from reality that he can’t even face up to the prospect of an interview with William. It is only at the end when all has been resolved that he can sit down and be brutally honest. Even though we don’t hear anything of what he has to say in that final interview it doesn’t matter, the mere fact that the interview is happening at all says everything we need to know. He has gone from the point of only being able to talk honestly with his bandmates when they think they are all about to die on the private plane. It’s a brilliant scene in of itself as each bandmate reveals their own deep seated issues with one another and because it is the only time in the movie that they do so, they never actually resolve these issues. They go unspoken and unnoticed despite being the driving force behind so much of their temperamental behaviour. The manipulation, betrayal and resentment does not go away, the only difference is that they are now all aware of it.


But then just when you think the scene can’t get any better, William interjects. Going back to his relationship with Penny, I think part of what makes it work so well is how their entire personas stand in such stark contrast to another. Penny’s entire life consists of pretending to be someone else. She lies about her real name, her age and her life goal is to move to Morocco where she hopes to adopt an entirely different personality once more. She commits to this façade so much that when that illusion is shattered and she realises that to Russel and the band she is little more than another groupie that they can use for sex, she breaks down. William’s whole role within the band is to convey the truth, Penny’s is to make them forget to the truth. With William at a crossroads between reality and rock, she represents the idea of completely rejecting the former. 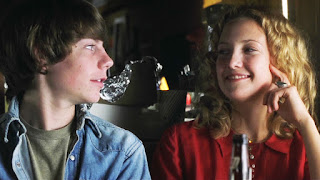 Which leads me back to the plane, in which William expresses his own resentment with the band and their treatment of Penny. We already know that he loves her but to see him stand up to the people he once idolised, to see him fully accept that their world is an illusion that they can barely maintain themselves, it feels so cathartic. I do sometimes speculate on if William and Penny would have a future together after the film ends. They certainly shared an intimate connection that ran deeper than anyone else in the movie, shown in that William was the only person to know her real name. But are they too different to see eye to eye?


Why did she confide in William though? Probably because, like Crowe himself, he is an observer. Crowe was favoured by the bands he worked with during his time at Rolling Stone, he praised the bands while also seeing them for what they were, he covered the bands that hated Rolling Stone Magazine. Not only is his protagonist eerily similar (which only adds further to how personal the film feels) but his whole filmmaking sensibility takes on a similar guise. Crowe’s camera is intent on observing the small moments that define each character, observing their nuances and allowing his actors to convey them brilliantly. It’s not just an approach that understands the story it’s telling but one that also utilises the talent he has on offer.


More than anything else ‘Almost Famous’ is about the way we hide the truth from those around us, we seek to impress people and show them the version of ourselves that we think they will like the most. William’s first draft of his story is rejected because it “sounds like the band wrote it”. Lester Bangs (played brilliantly by Philip Seymour Hoffman might I add) reminds William and us that those who express the truth will struggle to belong simply because people don’t like to see themselves for what they really are. William wonders if he’ll ever be cool like his sister said, but by the end he’s more interested in being what he wants to be……which is a response that will get laughed at in high school I can tell you now.
Posted by Joshua Price at 14:48