"She will not stop, until she has remade this world in her image."

It is always risky to state your intentions to make an enormous shared universe franchise before you have even released your latest movie. It is a literal case of not getting too far ahead of yourself, but studios seem intent on doing it time and time again. A prime example would be Sony who had ambitious plans for a whole franchise but burned it to the ground with ‘The Amazing Spider-Man 2’, co-written and produced by one Alex Kurtzman. What is Kurtzman doing now you may ask? Well he’s writing and directing Universal’s ‘The Mummy’.


Nick Morton (Tom Cruise) is a soldier of fortune who plunders ancient sites for timeless artefacts and sells them to the highest bidder. When Nick and his partner come under attack in the Middle East, the ensuing battle accidentally unearths Ahmanet (Sofia Boutella), a betrayed Egyptian princess who was entombed under the desert for thousands of years. With her powers constantly evolving, Morton must now stop the resurrected monster as she embarks on a furious rampage through the streets of London.


So as I was saying, Alex Kurtzman has already laid the founding of one franchise that never happened. But unlike Sony, Universal seem even more confident and sure of their future in this territory. When I saw ‘The Mummy’ the classic Universal logo lead straight into their ambitiously titled ‘Dark Universe’ title card. I must admit while I did not have any interest in a Mummy remake, I was happy to see a Tom Cruise action movie that the trailers suggested ‘The Mummy’ would be. However, this brings me back to Kurtzman who seems to have made the exact same mistakes here as he did with ‘The Amazing Spider-Man 2’.


Not only does ‘The Mummy’ feel like a movie that panders towards sequel baiting in the worst possible way, but before it even gets to the point of franchise building it simply wasn’t that interesting to begin with anyway. It succumbs to the generic supernatural tropes that have made the genre loose favour with popular audiences while also lacking any sense of fun or charm that might have made it more enjoyable. Apolgies in advance if I use the words “generic” or “vague” throughout this review because there really is no better way to describe every aspect of ‘The Mummy’. 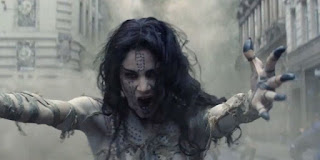 Even the characters fit into that description perfectly from their motivations to their personality and even their basic function. Having sat through the whole movie I still don’t actually know what Tom Cruise’s job is. Was he a soldier, treasure hunter, fugitive, archaeologist? His understanding of ancient Egypt wildly fluctuates from apparently being able to instantly recognise the era of a lost tomb he’s just stumbled into to not knowing what Hieroglyphs are. It’s frankly baffling. But not nearly as baffling as the titular Mummy’s vaguely defined supernatural powers. I can’t stress how frustrating it is when you have an antagonist whose strengths and weaknesses go completely undefined for the entire length of the movie.


All of this is a shame because Cruise and Boutella are two engaging screen presence, particularly Boutella whose physical performance feels like it belongs in a much better movie. But in a movie with such a flat and uninteresting protagonist, coupled with an antagonist completely lacking in a clear motivation or defined stakes, neither of them can redeem this. The rest of the cast are fine, but once again none of the characters are engaging enough to make me feel invested in the scenario of this movie, much less a whole franchise load of sequels and crossovers.


Speaking of which, what drags the movie down even further is that halfway through it is no longer a Mummy movie. It suddenly turns into Chapter 1 of this ‘Dark Universe’ and now we’re left to deal with one expositional scene after another that attempts to flesh out this universe only for the conclusion to suddenly remember that the first movie is still going on so we’d better have some rushed action scene. Worse still, nothing makes any of it stand out at all. There’s no flashy dialogue, smart direction or engaging moments. It just all blends together into an endless cycle of nothingness that reminded me of two things. Firstly, I was reminded of how the MCU’s first movie set the groundwork for a whole universe via a few Easter Eggs and one Samuel L Jackson cameo which seems like an even more remarkable feat in light of this. Secondly, I un-ironically miss Brendan Frasier.


Pandering to sequels that may never happen, uninterested in its own mythology and too generic to be even remotely interesting.