"Here's the thing, being good or bad mostly depends on who you're standing next to."

As directorial debuts go, few of recent years were more impressive or distinct than Ana Lily Amirpour’s ‘A Girl Walks Home Alone at Night’, a neo-noir, vampire western set in Iran, it was a big of a genre hybrid to say the least. It was atmospheric, stylish and beautifully unique as well as breathtakingly bold. Not only that, but for a film as unique as it was, ‘A Girl Walks Home Alone at Night’ was surprisingly cohesive, working as a singular piece of storytelling rather well. Naturally then, I was looking forward to her next film.


Arlen (Suki Waterhouse) is abandoned in a Texas wasteland that is fenced off from civilization. While trying to navigate the unforgiving landscape, Arlen is captured by a savage band of cannibals led by the mysterious Miami Man (Jason Mamoa). With her life on the line, she makes her way to a cult like leader called The Dream (Keanu Reeves) and must find a way to survive amid the chaos of this savage dystopia.


One thing in particular that I loved about ‘A Girl Walks Home Alone at Night’ was how its unique style never felt like it was substituting for a lack of substance. As opposed to just dressing her movie up in bizarre stylistics, Amirpour found the best way to enforce the substance that lay within. It was just half an hour into ‘The Bad Batch’ that I realised just how remarkable a feat that was because her second film does exactly what I feared her first would. As opposed to populating her story with a rich and dynamic substance, Amirpour has opted to go for flashy visuals and set pieces in favour of telling something that is actually cohesive.


It’s certainly pretty to look at, in fact a few of the visuals are strikingly hypnotic with the Texan backdrop serving as a stunningly rich stage. It seems like all the ingredients are there to create something brilliantly oddball once more, but none of these interesting elements meld together. It was as if Zack Snyder directed an indie film, there’s plenty of pretty images but not enough substance to connect it together. That being said, where the metaphor falls down is that Snyder’s films still have something going, it’s just mishandled, which is not the case here. ‘The Bad Batch’ has a few decent concepts but nothing to sustain a two hour movie and the result is that it runs out of steam less than an hour into its runtime and every extra minute from that point onwards only hurts the film further. 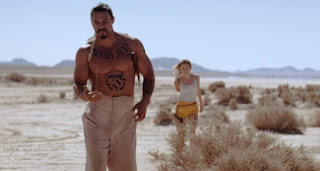 To say its narrative is stretched thin would be an understatement. The dystopian wasteland setting felt heavily reminiscent of ‘Mad Max’ and like the most recent instalment of that franchise, especially given that the main character is an independent women with a prosthetic arm protecting a being more vulnerable than her. But the similarities don’t stop there as ‘The Bad Batch’ begins with its protagonist getting captured and imprisoned by a cult who utilize her body to serve their own needs. But where George Miller’s dystopian masterpiece handled all of this in the space of about five minutes so that the main story could get underway, ‘The Bad Batch’ takes a good half an hour to get to the same point, and the subsequent story not only feels completely disconnected but also stretched thin to the same degree.


A simplistic story could work in this environment if the characters were interesting enough to empathise with. But sadly that is not the case, or at least with the main characters it is. We don’t really get any insight into what drives them or any sense of genuine development. The writing doesn’t give much for any of the actors to do so it’s little surprise that I don’t really have anything to say about their performances. I can only say that I’m disappointed how little physicality there was to each role but as I said they are not exactly given a lot to work.


Not only that, but whereas ‘A Girl Walks Home Alone at Night’ managed to blend its contrasting genres extremely well, ‘The Bad Batch’ only seems capable of conveying one genre per scene. Billed as a romance, dystopian horror with a dark comedic edge the movie never succeeds in expressing any more than one of those at a time. The result is that while any one scene, when taken on its own, feels strikingly bold, when strung together as a cohesive whole the film fails to gel and comes across as being tonally confused. It’s hard to latch onto any consisting theme or narrative when the movie itself is skipping around between moods and while I think the music choices are there to try and ease the viewer into this tonal gap the effect is that it only alienates the audience even further.


Impressive on a visual level but with little else to back it up, ‘The Bad Batch’ is a disappointing second feature from Ana Lily Amirpour.