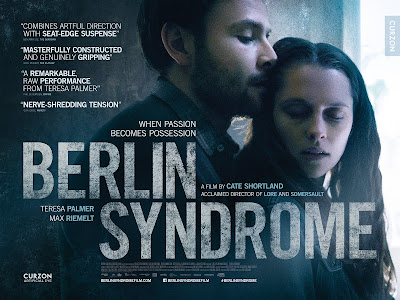 "Berlin is full of these empty places."

Had I been more familiar with Cate Shortland’s work as a director I would have probably have been much more excited for her latest feature, ‘Berlin Syndrome’. Her 2004 debut ‘Somersault’ was an excellent and deeply intimate coming of age fable, and then her historical drama set at the start of WW2 called ‘Lore’ was even better. When looking at her career as a whole (despite the fact that it comprises of only three movies) it is clear she’s intent on exploring the same kinds of themes and characters but from differing angles and environments, which makes her latest film all the more interesting.


Clare (Teresa Palmer), a young Australian tourist, is backpacking around Germany, taking photographs of architecture and exploring shops. In Berlin, she meets a local man named Andi (Max Riemelt) and has a one-night stand with him. The next morning, however, she finds that he has locked her in his apartment and events only escalate from there.


Like her other films, ‘Berlin Syndrome’ certainly reflects Shortland’s fascination with isolation and finding one’s way into a much wider world. It will sure as hell put you off that gap year you had planned in which you’re supposed to find yourself and sing meaningful songs around a campfire only to get eaten by a shark….(I may have drifted into describing the opening of ‘Jaws’ now, where was I?). Like the victim of the crim it depicts the film slowly winds up to reveal its sinister nature, taking its methodical time in mapping out who these people are and what kind of situation they find themselves entrapped in. It is certainly patient it its method and as the film ploughs forward it’s surprising how big of an asset that becomes as even the quietist moments are drawn out enough to keep the viewer on the edge of their seat.


But for all this patience the film feels remarkably taut for the most part. I would criticise the movie for having one too many red herrings and occasionally losing the centre of its narrative, for the most part it keeps its focus right where it should be. In this case that focus is on the ever changing dynamic of its two main characters, as their roles become drastically altered so does their understanding of one another and it’s through this character drama that Shortland wrings a lot of her films tension from, the dread that accompanies the knowledge of never being able to predict what someone will do next. 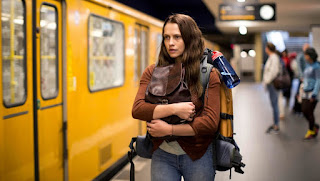 As I said, the film relies heavily on the ever more complex relationship of its two main characters and therefore it helps that said characters are being portrayed by two highly capable actors. Teresa Palmer possesses a great sense of naivety that makes her vulnerability all the more prevalent at the start of the movie but also a determination that makes her constant strive to uncover what is going on just as believable. Meanwhile, Max Riemelt goes from being charming to unnervingly terrifying in the blink of an eye without ever making it feel jarring.


As a director, Shortman’s talent goes far beyond juts creating a sense of discomfort though. The ensuing nightmare only feels as effective as it does due to how well she captures the thrill of Clare being in an entirely new environment. The excitement and euphoria are all there with no obvious foreshadowing to take you out of the moment. It is only through the score of the movie that we get an sense of unease during the first section and even then it’s more ambiguous than anything, establishing that something is happening but leaving the viewer in some doubt over how specifically to feel about it.


What is even more amazing than this sense of atmosphere though is the way Shortman’s charaters evolve over the course of the movie as well as how she chooses to portray that. As time goes on the initial terror of Clare being trapped in this environment wears off and they enter a sort of unsettling domestic scene. There are rituals and regularities that underpin this situation, however strange it may be, with Shortman paying close attention to them as she knows how vital they will be in drawing out a reaction from the audience themselves. She manages to do almost all of this wordlessly as well, never relying on heavy exposition. The only problem is that despite coming in at under 2 hours, ‘Berlin Syndrome’ still feels like it goes on for too long. The pacing and structure may be perfect at the start but the longer the film goes on the more these elements start to crack under the pressure. The fact that it includes so many unnecessary detours that feel more like a dead weight more than anything else only increase this. But aside from that ‘Berlin Syndrome’ is a well-constructed thriller.


An imperfect but highly fascinating and deeply interesting thriller that boats superb direction and performances.