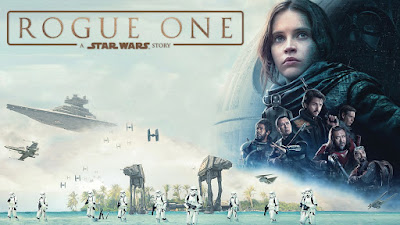 "Rebellions are built on hope."

It is easy to be sceptical of a film in the position of ‘Rogue One’. Not least due to the continuing story of onset issues, re-writes and re-shoots that range in how extensive they were. But then of course there is also the fact that the inherent purpose of the film is to be touching upon the altar that is the original ‘Star Wars’ film, with its plot based on a single line of exposition. Adding to this is the notion of an untested and unproven spin-off concept, as well as that, the words “prequel” and “Star Wars” aren’t usually in the same sentence for good reasons. So can it deliver?


With the galaxy under the oppressive rule of the evil Galactic Empire, the Rebel Alliance recruits the daughter of Imperial technician Jyn Erso (Felicity Jones) to find him to prevent the completion of a massive superweapon that the Empire will use to bring terror to the cosmos.


This close to the end of the year, I’m thrilled to say that of all the ups and downs, movies that defied expectations and went far above what we thought they would aspire to be, ‘Rogue One’ may be the biggest surprise of them all. That of course means two thing, either my expectations were at rock bottom, or the film was not just good but utterly incredible in a way that few blockbusters have been this year. It is the latter. Maybe it’s the fact that it’s still so heavily engrained in my memory, or maybe the elation I had when I first walked out of the cinema is still with me, but I can honestly say that ‘Rogue One’ is the best film of the ‘Star Wars’ franchise since ‘The Empire Strikes Back’.


Not only that, but it is the first ‘Star Wars’ film since the saga’s 1980 high point to match its bleak and dark outlook, to envision that galaxy far, far away and craft a film of complexity and darkness that we have not witnessed from the franchise for quite some time. Of course, none of this is to say I wasn’t completely satisfied with last year’s terrific ‘The Force Awakens’, but whereas JJ Abrams film served to reintroduce us to ‘Star Wars’ by harkening back to the glory days of the franchise, ‘Rogue One’ pushes firmly into the future. It is stylistically distinctive more so than any other entry in the franchise, yet also so intrinsically and firmly rooted within the ‘Star Wars’ environment that it never fails to evoke a sense of wonder and awe, while underpinning them with the weighty and often brutal reminder that the galaxy is well and truly under an oppressive rule.


It is surprising that the film possesses such clarity of vision, given that the build up to its release was plagued with rumours of re-shoots (which we saw the damaging effects of earlier this year with the disastrous ‘Suicide Squad’). But ‘Rogue One’ does not bear the scars of post-production tampering. It never feels engineered or manufactured. Part of this could be due to how ‘Rogue One’ navigates space and time in a different way to any other ‘Star Wars’ film in order to tell its story, incorporating flashbacks and traversing numerous locations in order to establish its characters and plot. While one negative of this technique is that the first act occasionally feels densely populated, in which certain plot details are repeated to us and the planet hopping technique could be jarring on an expositional front, even that side effect is minimised by the fact that each scene feels necessary by informing not just the plot but the characters as well. We become intimately familiar with both the narrative, environment and characters within the first few minutes.

Speaking of characters, they all act as a welcome addition to proceedings. While some are not given as much depth as others, every player is not only likable but presented as more than just a standard good guy. They are all clearly established as damaged individuals who have fought for so long and lost so much already, choosing to fall back on some inner faith like Donnie Yen’s unwavering belief in the Force to Diego Luna’s stern conviction that his actions are in the name of the greater cause that is the Alliance. It portrays its heroes in a far less idealised manner, which serves to make them strikingly compelling. The ensemble cast are all turning in terrific performances with Felicity Jones, Diego Luna, Donnie Yen, Riz Ahmed and the rest of their rebel scum conveying a sense of inner loss and deep wounds while also displaying a steely determination and heroism. Then there is Alan Tudyk on hand as the dryly hilarious K-2SO as well as Ben Mendelsohn as Director Krennic, whose unusual blend of charisma and restraint delivers an appropriately intimidating villain.


But of course there is also a lot to be said about returning characters. If you have seen the trailers you will be aware that Darth Vader is in this film. While he is used sparingly the sequences that include him are truly phenomenal. We are long past the territory of bringing Vader back only to characteristically castrate him with melodramatic cries of “Nooooo” and pining over Natalie Portman. Here he is terrifying and awe inspiringly menacing, with one particular scene being utterly transcendent in its execution, resembling something out of a horror film more than anything I’ve seen in a ‘Star Wars’ movie up to this point.


Despite the fact that we inevitably know where this story will end, the narrative rarely fails to be captivating. I’d liken it to a film about World War 2, where historically speaking we know who wins in the end, but the mechanics of the storytelling allow the narrative to be surprising in how the story in question is presented. Incidentally, as promised the film does indeed resemble and recall war films in its execution and style, the only difference being that this one happens to take place with the universe of ‘Star Wars’ as a backdrop. And all the while the film is introducing and establishing in a way that is engaging and fun, making it feel organic and flowing.

Part of this is due to Gareth Edwards superb direction. He relies heavily on handheld cameras and 360 degree shot radius’, which further helps implant the tone of a gritty and fully realised world and Edwards’ usual skill at representing cinematic scale is still keenly felt, particularly within the battle sequences which look truly stunning under his direction. I also think ‘Rogue One’ utilises his previously untapped talents as a very gifted storyteller, due to how even amid the numerous locations and ensemble cast of characters Edwards keeps the viewer focussed on who everyone is and what their place is within this world.


Another area in which Edwards excels is the way in which he utilises visual effects. As we saw with ‘The Force Awakens’ practical effects are used in plenitude and the film is all the better for it, especially given that ‘Rogue One’ is designed to be closely linked with the 1977’s ‘Star Wars’ a tangible feel to the world allows it to seamlessly fit into that continuity on a narrative and visual level. But even the CGI is integrated brilliantly and is made to feel rooted within that world as well. A few visual effects are bound to get people talking, and without spoiling them I can say that though they’re not quite flawless, Edwards knows for the most part how to use them and as a result the effect is rarely noticeable. At worst it is a valiant effort on the filmmakers part, a gamble that in my opinion paid off. It is pleasing to see ground-breaking special effects used in such a way that enforces the story rather than substituting for a lack of one.


Dark and complex and well as thrilling and intricately staged to be satisfying for anyone who has seen a ‘Star Wars’ film before, ‘Rogue One’ stands as the best instalment of the iconic franchise since 1980.