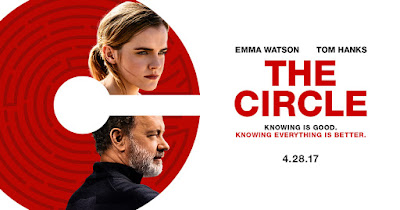 "I am a believer in the perfectibility of human beings. At the Circle, we can finally realise our potential."

I should probably learn to not be so excited based purely on the promise of a movie. Not only did a film with the premise of ‘The Circle’ sound like a brilliantly relevant subject, but combined with the strong cast of Emma Watson, Tom Hanks, John Boyega, Karen Gillian, Patton Oswald and Bill Paxton (in his last ever film role) as well as being directed by John Ponsoldt (‘The Spectacular Now’, ‘The End of the Tour’) made it appear to be a very promising piece of cinema. But promise and execution are two very different things.


Mae (Watson) is an ordinary and unaccomplished young woman with an ill father. Through an influential friend, she gets a customer relations job at powerful internet corporation The Circle. She quickly rises through company's ranks, and is selected for an assignment with the Circle's newest technology which she eagerly takes on. Soon she finds herself in a perilous situation concerning privacy, surveillance, and freedom that could affect the entire human race.


I always hate it when movies try to preach a message about something they clearly have no understanding of. It’s like being lectured by a clueless teacher, a giant waste of everyone’s time. But imagine of said lecture was also mind numbingly repetitive, predictable from the outset and so inconsistent in tone you start to wonder if you’re even listening to the same person anymore. Take all that into account and you have ‘The Circle’.


There are a lot of interesting ideas and concepts within ‘The Circle’ but in another way that is the exact problem, in which none of these concepts feel like a fleshed out narrative, a compelling story or interesting characters. They remain purely conceptual and never actually feel integrated into the story. In fact I question whether anything was actually integrated into this story as it mindlessly strays from one plotline to the other, introducing new elements on a whim, dropping old ones without actually concluding them and taking the narrative approach of a thriller even though everything the movie is saying becomes overtly obvious within the first fifteen minutes. There virtually no underlying structure or plot to proceedings and instead if just drifts around aimlessly.


As I said at the start though, for the movie that keeps insisting it is a parable about the dark side of modern technology it seems to know very little about it. At its best it resembles an amateur rundown of technological concepts and at its worst it’s a work place drama that drops in a few sentences of technobabble every so often. There are any number of outlooks on this subject that are not only much more informed but take a much more original approach. Half of them are on TV in the likes of ‘Black Mirror’ and ‘Silicon Valley’ and both of them feel infinitely more cinematic. 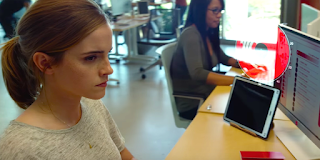 Despite showing a talent for directing low key, human dramas, here Ponsoldt seems lost over how to approach this material. In what feels like it should have been a tightly wound thriller or a cutting edge satire he tries to make it both and the result is a movie caught awkwardly between two directions, being neither instead of both and it’s not just through tone. His editing and direction heighten the idea that we’re seeing a mutated hybrid of two very different projects, both of which feel cut short as a result. To make matters worse the plot is just so predictable and repetitive of itself that it’s hard not to roll your eyes whenever the movie introduces a new element it seems to think will catch you by surprise. It only succeeds in further convoluting the already obvious story.


Not even the talented cast seem to be able to make this work. Boyega and Gillian feel underused, Watson is given so little to do with the character that it comes across as utterly one dimensional and flat. Then there’s Tom Hanks who despite being mildly magnetic as the villain still has too little to do. We understand the role of the tech giant Circle corporation is to carry out evil intentions but we never actually find out why what they’re doing is evil. By that I don’t mean there’s a lack of motivation (though for the record there isn’t any of that either) I mean the movie never actually explains why, by the laws of this world, what The Circle is doing is considered so diabolical.


It really is remarkable that a movie that is basically about what would have happened if Facebook was organised like Google became a thing can feel so detached or uninvolving. ‘The Circle’ not only seems completely clueless about what it is trying to say but also what it wanted to be in the first place. There are enough scary concepts about the internet to make a movie foretelling them feel relevant, but the ones you find within ‘The Circle’ have not only been explored elsewhere, they also feel hideously repetitive.


‘The Circle’ just preaches things we’ve heard elsewhere but in a much less effective and much less interesting way.