Jim and Andy: The Greay Beyond 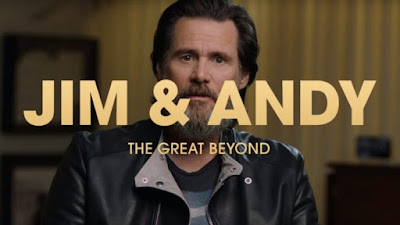 "I know him as well as I can know him. But who do you know, Even when they're right in front of you?"

If you’re like me and you love Andy Kaufman, you love Jim Carrey and you love the flawed but still very impressive 1999 film in which the latter plays the former, ‘Man on the Moon’ then there should be an instant interest in this latest documentary from Netflix. Beyond that, it’s even directed by Chris Smith, director of ‘American Movie’ which is also utterly fantastic and something I’d recommend to anyone interested in filmmaking.


During the production of the 1999 film ‘Man on the Moon’ documented Jim Carrey’s transformation and performance as the late comedian Andy Kaufman was documented as an intended behind the scenes featurette. Until recently the footage has been kept under wraps, but has now been reassembled. With a modern day Carrey reviewing and looking back upon the experience, we witness this fascinating examination of actor and subject.


Jim Carrey is hardly the first actor to adopt this method approach of fully immersing himself within a role to an almost insane degree. In fact it seems every year we get crazy stories like Daniel Day Lewis insisting upon staying in character for the entirety of production or whatever Jared Leto is doing to get attention. But I think it’s never been as well documented or as thoroughly examined as it has in ‘Jim and Andy’. It’s an insightful, shocking and sometimes deeply poignant look at the way an actor can so easily become lost in their own craft and lose sight of their own identity, particularly in the case of portraying Andy Kaufman, a man famed for never defining where the act ended and the person began.


The documentary opens with a brief recollection of how Kaufman and Carrey each started their careers. Both of them defied conventional comedy practises by instead of simply telling jokes or monologues, embraced the sheer uniqueness and outright bizarreness of their own personalities. Not only does this establish a clear commonality between the two, but it’s abundantly clear how Kaufman was a major influence on Carrey. They each represent the height of individuality within comedy, not only in how they executed their stylings but also how they were completely embraced for it.


This also helps to add context to what follows, because in 1998 Carrey was unquestionably one of the biggest movie stars on the planet. He had a clearly established personality to his friends and fans so his subsequent descent into embodying Kaufman is all the more disconcerting. It was an embodiment that he maintained throughout the production of ‘Man on the Moon’ both when the cameras were on and off. He adopted Kaufman’s eccentric personality and love of practical jokes, gradually pushing the cast and crew to breaking point. 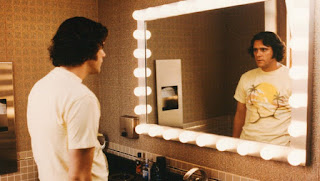 At times the footage actually takes on a frightening realness. Carrey seems so utterly invested in his character that you can clearly see the people around him struggling to cope. There is a sense of unease in how they address and speak to him, acutely aware that they are not talking to “Jim” as they know him anymore. In fact quite often they address him as “Andy”, giving him information that he says he will “pass onto Jim, wherever he is”. There’s also a good chronicling to development to those reactions. Initially Carrey’s co-stars are elated by his transformation but as his onset antics grind them down they shift towards a more unnerved reaction not just out of frustration but genuine concern for how deeply Carrey immersed himself into the identity of a dead man.


The documentary is also keen to point out the irony of Carrey never dropping the act, as “never dropping the act” could be the perfect way to describe Kaufman’s own life. Kaufman was so utterly committed to his own routine that he blurred the lines between where his on stage persona began and ended. In fact as a biopic ‘Man on the Moon’ doesn’t do a great job of deconstructing Kaufman as a person, but how can a story do that when said person was an ever churning machine of mystery and intrigue. To this day rumours are still circulating that Kaufman’s death from cancer at age 35 was part of some grand hoax on the comedian’s part.


But amid all of the insanity and questioning, there are numerous moments of genuine poignancy throughout ‘Jim and Andy’. Carrey was able to meet Kaufman’s family whilst still in character, including Kaufman’s own daughter who had never had the chance to meet her father. It’s a truly surreal concept and to then see Carrey recounting the crisis of identity he had when he had to come out of the character is another thing entirely. He remarks upon how he had taken the act as far as it could go, and now that it was over he found himself questioning who he was, and who any of us were.


Hilarious at times but equally unnerving at others, ‘Jim and Andy’ is a fascinating deconstruction of two uniquely talented people who never even met.