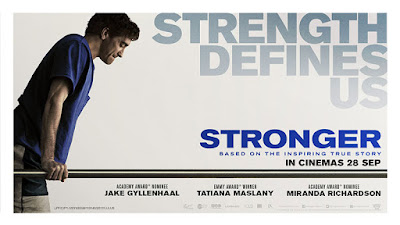 "You show the world that they can't break us no matter what the hell they do."

For a number of years now, Jake Gyllenhaal has been turning in amazing performances that have been overlooked by almost every major awards association. Whether it’s the uncertainty of ‘Prisoners’, the duality of ‘Enemy’, the regret of ‘Nocturnal Animals’ or (most atrociously of all) the truly stunning performance in ‘Nightcrawler’, Gyllenhaal keeps being forgotten. I figured before long he’d turn to a more conventional kind of movie to deliver a good performance and that is what ‘Stronger’ seems to be.


Jeff Bauman (Jake Gyllenhaal) loses both of his legs when two bombs explode during the Boston Marathon on April 15, 2013. After regaining consciousness in the hospital, Jeff is able to help law enforcement identify one of the suspects, but his own battle is just beginning. With unwavering support from his family and girlfriend, Bauman embarks on a long and heroic journey to physical and emotional rehabilitation.


It may surprise you to learn that the director of this true life drama is David Gordon Green, who also helmed comedies such as ‘Pineapple Express’ and the entire second season of ‘Vice Principals’. But he did also start his career with the excellent drama ‘George Washington’ so maybe this isn’t as big of a transition as it would initially seem. For the most part Green handles the drama of the story very well, never hamming up emotionally charged moments but also succeeding at making each emotional beat land as it should. There’s an inspirational undertone to the film that is likely to be affecting to anyone who sees it.


I think ‘Stronger’ benefits from the fact that it sets itself up as a very standard heroic story. Jeff Bauman has every reason within this story to be the unwavering hero, not just after the marathon but before it as well. I won’t spoil anything but let me just say that Jeff’s reason for being at the marathon in the first place only makes his eventual struggle even more empathetic. But then the film subverts our expectations by portraying a much bleaker view of proceedings. As I said before, there’s plenty of inspirational moments, but the movie makes it clear that this story is more about Jeff wrestling with his newfound position more than anything else.


Most of all, ‘Stronger’ simply feels honest. It seems to understand that being hailed by everyone as a hero comes as little solace to Jeff when coping with his injuries, and knows that his real struggle is in regaining the little things in his life. It’s a movie that revels in the small victories and takes a much more nuanced approach to his recovery than most dramas would. It’s not afraid to show his struggle at its bleakest and most difficult moments, even when most people would like to pretend that these kind of stories end with the event itself rather than the aftermath. 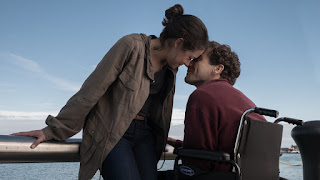 A large part of that honesty is to do with Jake Gyllenhaal’s excellent performance at the centre of the movie. There’s a great physicality to Gyllenhaal’s portrayal that acts as a constant reminder to the audience of Jeff’s struggle. There’s an effort to every movement and a consequence to each step forward. But his emotional portrayal is even more affecting. It’s clear from the start that Jeff is wrestling with some demons as he attempts so come to terms with what has happened. Gyllenhaal ensures that these struggles are always in the audience’s mind, but also never lets them overshadow Jeff and is unafraid to play him as a fleshed out character in his own right.


There are also some excellent supporting performances from the likes of Miranda Richardson and especially Tatiana Maslany. Each character relating to Jeff’s life is trying to influence him in some way, but only in a manner that they see as being best for him. His mother wants to surround him with attention from media outlets but doesn’t see how they are ultimately effecting him negatively. Shoe does it out of a need to see her son celebrated for his heroism which is certainly an understandable need.


I’d say the only major weakness in ‘Stronger’ is that it doesn’t quite commit to this brutal honesty for its third act. Maybe it’s just the fact that it’s structurally designed to have a more inspirational or uplifting finale and it does feel earned to a certain extent. But it just doesn’t quite mesh with the movie that came before it. The characters become a bit less empathetic and are simplified as the film rushes to its conclusion, and with the late inclusion of a major character the third act starts to feel more and more like an additional part of a different movie. It’s a small slip up but one that unbalances the film as a whole unfortunately.


An uplifting but also brutally honest drama that’s held up by a terrific Gyllenhaal performance. It only stumbled slightly in the third act.