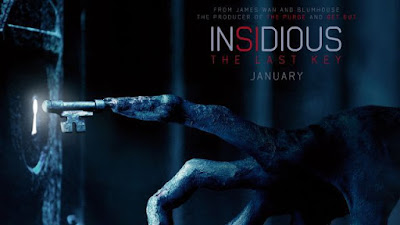 "These hauntings can be terrifying things. I should know, I've faced many evils in my life."

Its odd how over the course of one year, Blumhouse Productions managed to seemingly transform themselves from being a studio that revels in bringing us low standard horror films and pumping out endless sequels to the few successful ones, into a unique housing for gifted filmmakers. Or at least that’s the direction I briefly thought they might be taking with the release of acclaimed thrillers like ‘Split’ and ‘Get Out’. But almost a full year after those two triumphs, it seems we’ve reverted to business as usual.

Parapsychologist Elise Rainier (Lin Shaye) receives a disturbing phone call from a man who claims that his house is haunted. Even more disturbing is the address, 413 Apple Tree Lane in Five Keys, N.M., the home where Elise grew up as a child. Accompanied by her two investigative partners, Rainier travels to Five Keys to confront and destroy her greatest fear, the demon that she accidentally set free years earlier.

The first ‘Insidious’ is a fine horror film, nothing mind blowing but serviceable enough and with a good enough understanding of the genre craft to be entertaining. You need only look at James Wan’s career trajectory to understand that the movie was good enough to allow him to move into bigger things. But as ever, when a studio sees potential they will tend to order as many sequels as they can, which leads us to the fourth entry of this franchise. Although that being said what this entry to the ‘Insidious’ franchise and its predecessor have lacked in craftsmanship made up for it with their character dynamic. The central group of characters work well as a unit and have decent opportunities to allow the actors to give out some genuinely good performances.

In that regard, the standout of the entire movie is Lin Shaye. In fact she’s so good that I’m actually glad we did get another entry in this franchise if only to provide her character arc with some closure. Say what you will about the movie itself, but it’s impressive that a 74 year old woman can carry a horror franchise in the way Shaye has here. The screenplay also seems to understand what a talent she is as it gives her plenty of opportunities to emote. Quite often director Adam Robitel seems well aware that the best tool at his disposal is Shaye’s expressions and he keeps the camera tightly focussed to her in moments of high intensity. 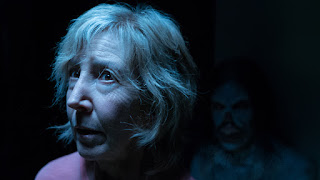 The script also does her the favour of fleshing out the character’s backstory so that Shaye has a real foundation from which to build her performance. She’s not merely reacting to the horrors as they unfold, they clearly hold a deeper resonance for her that lead to some unique acting choices in how she chooses to portray her fear. The theme of generational trauma has been a staple of the ‘Insidious’ franchise and it’s gratifying to see that the script has continued to push that theme through its depiction of the ghosts and backstories of its characters.

Sadly though, this great character work doesn’t translate as well into the movie as a whole. While the scares of ‘Insidious: The Last Key’ are effective at first they soon loose their power as the film relies more heavily on jump scares. It’s almost as if the movie is too scared to stay committed to the dark and brooding atmosphere it had initially begun to culminate, and instead tries to energise itself with a series of jump scares that end up defusing the tension. Worse still is that the movie becomes increasingly repetitive in terms of the methods is uses to garner those jump scares. Once is frightening enough, but to then try and revisit the technique means that I found myself anticipating the scares before they arrived, resulting in them feeling more annoying than unnerving.

Another issue is the tonal unbalance within the movie. Though the character dynamic lends itself to strong dramatic moments it doesn’t do the same for moments of humour, especially when those moments of humour start undercutting a potentially eerie sequence. Again it goes back to this issue of the movie not seeming confident enough in its own genre to commit to it. At times ‘Insidious: The Last Key’ feels frustrating in how it wants to pander to a broader demographic. This is also an issue in terms of editing as the movie has strong adult themes that would play well to a mature horror film, but has clearly been edited of any gore that would lose it that precious PG-13 rating. Neither of these are major issues but they served to distract me from an otherwise competently made horror film. Where the third act should have been gripping, I found myself counting down to minutes for the film to run its course.

Effective at times and featuring a strong performance by Lin Shaye, ‘Insidious: The Last Key’ is held back by its unbalanced tone, repetitive nature and failure to commit to its craft.