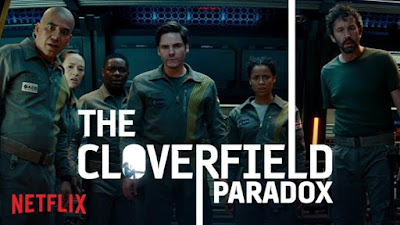 "Whatever you're doing right now, stop. Go to your children, hold them kiss them, because that's all there is."

With the surprise announcement of another instalment of the ‘Cloverfield’ franchise that promised to bridge the gap between the original 2008 film and 2016’s ’10 Cloverfield Lane’ I found myself a little conflicted. I’d always envisioned the ‘Cloverfield’ series as a possible cinematic equivalent to ‘Black Mirror’, an anthology series that could well be taking place in the same universe but is focussed on telling self-contained stories linked under a singular banner. But, I’d be lying if I said I wasn’t curious to see how the franchise falls into place.

Having spent the past two years on a space station orbiting the Earth, conducting experiments in the hopes of finding a solution to the planet’s ongoing energy crisis, a team of astronauts suddenly start to witness a series of strange events occurring. It is up to the crew to not only work on what is causing their ongoing crisis, but find a solution before it is too late.

So, if you went into ‘The Cloverfield Paradox’ wondering how the film would tie its respective franchise together and provide the viewer with decade old answers, then you may be disappointed for two reasons. Firstly because as a vehicle to shed light on the previous films it is mind numbingly vague and convoluted. Secondly, and more importantly, fitting into the franchise as a whole is the least of this movie’s problems as it completely fails to work even as a standalone piece of filmmaking.

The very opening of the film had me worried and inadvertently set the tone of that was to follow. The first few minutes alone are tonally confused and poorly paced to say the least, attempting to transition from sincere drama to high concept science fiction, moments of humour, character conflict and serious tension all within the first ten minutes. The style of the editing flips back and forth to try and match each of these tones but it just creates a muddled opening that tells the viewer little of the film’s intent. Rather than trying to pace itself and spread the various plot threads throughout the movie it feels the need to cram them into the first section. Worse still is that most of these plot threads are dropped until the point when they reach their conclusion, meaning that when they do it feels jarring and unearned.

The film races forwards with its narrative but never takes the time to endear the audience to that narrative, or the characters either. The closest ‘The Cloverfield Paradox’ gets to establishing a character dynamic is some contrived conflict that feels completely unmotivated. There are so many character moments throughout the movie that feel as if they are intended to have so much more weight than what they actually deliver. While the lead character Hamilton does have a compelling backstory, it’s addressed so sporadically through the script that it feels like a last minute addition. The others feel like caricatures who act without rhyme or reason, and whose only contribution is to lend themselves to a few inventive death scenes. 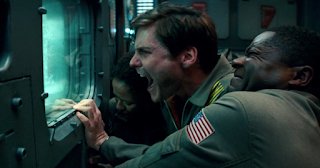 I was at least expecting some good performances given that ‘The Cloverfield Paradox’ boasts a solid cast. But even the likes of Daniel Bruhl and David Oyelowo seemed somehow stilted, as did Chris O’Dowd and John Ortiz. Whether it’s due them being given poor direction or that they had too little to work with from a character standpoint, none of them hit the mark. It also doesn’t help that the dialogue is hammed and simplistic as well. Once again, the only saving grace is Gugu Mbatha-Raw as Hamilton, but maybe that’s just due to having some tangible character to work with. It’s a decent performance but nothing that ever evoked an emotional response from me.

As it moves into it’s second act ‘The Cloverfield Paradox’ looks as if it might be finding its feet as it seems to be morphing into a kind psychological science fiction horror film, in a similar vein to ‘Event Horizon’. Sadly, much like ‘Event Horizon’, it’s also clichéd and overly manipulative. The sound design in particular is atrocious, with any scare being preceded by an insultingly predictable sound effect that will give away the result long before it occurs. Loud noises, quick edits and a constantly shaking camera create one insufferable jump scare after another. Even when it’s not using cheap tactics to try and scare the audience the editing takes on a mind of its own, with a number of action scenes towards the end of the film being almost incoherent.

I can at least say that the cinematography and visual effects of the film were well done, and it has an inkling of ambition to it that is commendable. But when it comes to uniting the ‘Cloverfield’ franchise the film is somehow even more infuriating. Ironically, at one point in the film a character shouts “You can’t have it both ways” which is a lesson ‘The Cloverfield Paradox’ should bare in mind. The film wants to be ambiguous and vague in how it links back to the franchise as a whole, but in also explicit in ways that feel pandering and predictable. But even when you take those explicit ties to the previous two films they simply don’t make sense. It’s just a mess through and through.

‘The Cloverfield Paradox’ fails as both a standalone film, and as an entry in the series as a whole. It’s in equal parts incoherent, clichéd and idiotic.