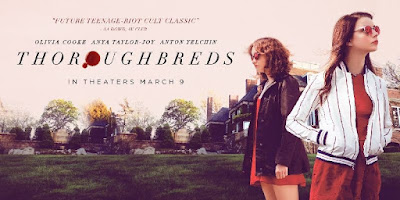 "The only thing worse than being incompetent or being unkind or being evil, is being indecisive."

There’s always something so enticing about a directorial debut. A completely clean slate that represents both the promise of a new movie that could yield a new style from a potentially gifted filmmaker, but also the idea that this first feature could be the first of many to come from said filmmaker. Obviously this is all somewhat ambitious and every year we see dozens of new releases from upstart directors, but it’s always great to see one emerge that really feels like something promising.

Childhood friends Lily (Anya-Taylor Joy) and Amanda (Olivia Cooke) reconnect in suburban Connecticut after years of growing apart. Lily has turned into a polished upper-class teenager who has a fancy boarding school on her transcript and a coveted internship on her resume. Amanda has developed a sharp wit and her own particular attitude but all in the process of becoming a social outcast. Though they initially seem completely at odds, the pair eventually bond and hatch a plan to solve both of their problems.

My introduction to this review might make the reader think that ‘Thoroughbreds’ is some ground-breaking work of brilliance, which it is no. It’s a solid, darkly comedic thriller with a tight execution and some excellent performances from its cast. But what makes the movie exciting on a broader scale is how distinctly and firmly first time director Cory Finley has control and command of his craft. ‘Thoroughbreds’ flips through multiple genres, dives into the psyches of numerous characters and covers some intriguingly deep themes without ever feeling strained over its 93 minute runtime.

‘Thoroughbreds’ is one of the few films I would describe as being comedic whilst also not being particularly funny. While that may sound like a contradiction in terms what I mean is that the movie has the pacing and flow of a comedy in that it has the ability to breeze past certain narrative details that would otherwise slow the story down. There’s a briskness to the way the narrative unfolds that actually works to make the movie that much more engaging. On paper the plot has the trappings of a twisted psychological thriller but through execution the movie felt much more watchable than something of that genre.

But what makes the film feel distinctive is how it navigates these trappings without ever shying away from the substance that bestows a greater level of depth to the characters. The dynamic between Lily and Amanda is especially engaging, with their interplay throughout being a highlight of the movie. The direction also does a lot to convey their developing relationship. Finley deliberately places them on opposite sides of the frame and uses a completely symmetrical shot/reverse shot pattern to display their conversations during the film’s first act, only to then gradually bring them closer both psychically and metaphorically as the film progresses.

These two characters are also elevated by the truly fantastic performances by Olivia Cooke and Anya Taylor Joy. There’s a coldness to Cooke’s role that makes her an initially intimidating presence, but the mannerisms with which Cooke uses to embody that character make her oddly relatable. Her characteristics never come across as empty quirks but instead a fully rounded individual. On the other hand there’s Anya Taylor Joy whose performance deliberately showcases more empathy and vulnerability, but loses none of the determination and confidence that eventually brings these two women together. 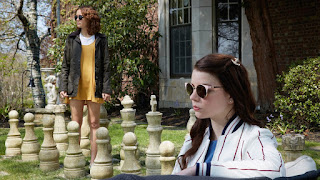 ‘Thoroughbreds’ also happens to be one of the final films of Anton Yelchin, whose supporting performance in the film is also wonderful to behold. Much like the protagonists, Yelchin initially comes across as a one dimensional character but then subverts that expectation to bring a truly surprising level of depth to the character. It stands as a testament to Yelchin’s talent as an actor and why it remains such a tragedy that his career and life was cut short.

As I said at the start though, ‘Thoroughbreds’ stands out for being a real display of potential from its writer and director. Cory Finley displays such a capable grasp of visual storytelling which he employs numerous times within the film to tighten the movie’s pacing even further. There’s no clunky exposition save for a few overtly told backstories and even those moments serve the characters development. The meta-narrative of these moments of openness communicates how the characters have become more trusting of whoever they are opening up to. Finley’s efficient direction also keeps the movie’s various moods strung nicely together. Just as there are many sharply humorous moments within ‘Thoroughbreds’ there are also sections of chilling tension. But these never feel at odds with one another.

There’s also an affinity for details in Finley’s visual language that, while sometimes come across as gratuitous in that I can’t really place how they serve the story, do help to single his filmmaking out as a distinctive presence. This also extends to the characters which through nothing more than the way Finley frames certain people at certain times are still allowed to breathe amid the fast moving plot. ‘Thoroughbreds’ is the kind of movie which flies by and yet still has plenty of substance to dig into.