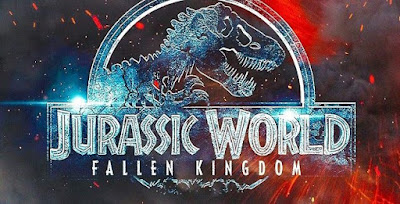 "These creatures were here before us. If we're not careful, they're going to be here after."

By this point you have to wonder if ‘Jurassic Park’ is just inherently ill-suited to be a franchise. Not even Spielberg could replicate the brilliance of the first in ‘The Lost World’ and each successive director has also tried but ultimately failed to further the franchise is any meaningful way. While Colin Treverrow’s ‘Jurassic World’ was an improvement over its predecessor in retrospect I think it’s fair to say it also fell short (I say in retrospect because I’m aware I initially was more positive on it but having revisited it…less positive). Now the challenge falls to J.A Bayona to find some way to bring forth some much needed initiative from the series.

Three years after the destruction of the Jurassic World theme park, Owen Grady (Chris Pratt) and Claire Dearing (Bryce Dallas Howard) return to the island of Isla Nublar to save the remaining dinosaurs from a volcano that's about to erupt. They soon encounter terrifying new breeds of gigantic dinosaurs, while uncovering a conspiracy that threatens the entire planet.

I think what made me change my verdict on ‘Jurassic World’ was how I gradually came to realise how little the movie actually had to say. Back in 1993 Spielberg achieved the amazing feat of making a film which discussed themes and developed characters in a way that was completely in tune with the action. There is no clunky exposition or forced character moments, just as there are no wasted action sequences or derivative plot elements, just each developing concept unfolding in perfect harmony. When ‘Jurassic World’ tries to include substance it comes across as contrived, then when it wants to convey action it comes off as empty.

I bring all of this up because there are moments in which ‘Jurassic World: Fallen Kingdom’ seems to have more in regards to a sense of story than its predecessor. It’s more sure of itself and initially seems confident in where the narrative is heading as well as what it wants to discuss. The problem however is that though Bayona seems more confident in bringing up story beats and conceptual threads, his film doesn’t develop them in any meaningful way. The story may be cohesive, but it doesn’t allow for any added depth or expanded themes.

It’s not just the themes that feel completely separate from the plot, so do the characters. Most of the story in ‘Jurassic World: Fallen Kingdom’ feels indifferent to the actual characters. They lack any kind of meaningful presence within the plot, which might be fine if they were developed to an extent, but they aren’t. Though Owen Grady and Claire Dearing do have some thin arc over the course of the film, it’s an arc that is completely derivative from their development in ‘Jurassic World’. Pratt and Howard fill their roles reasonably well, but it’s hard to judge their performances on any great level when their roles feel more like props than fleshed out characters.

The plot also fails to be engaging for the full extent of its 128 minute running time. Though there are an abundance of action sequences throughout the movie, I honestly found myself bored for a stretch during the film’s second act. Structurally the movie feels unbalanced and just drags on numerous occasions, from the amount of time it takes for the story to actually begin at all to the amount of time the plot stalls in the middle. Events continue to happen but the broader narrative hardly moves at all. For the amount of action that transpires for how much the plot moves, the result is that the action in question starts to feel inconsequential which just gave me even less of a reason to feel invested. 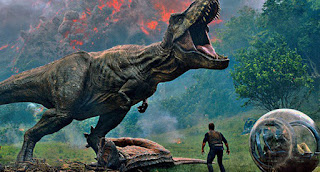 To the film’s credit it’s clear that J.A Bayona has a much more capable grasp of visuals than any other director to tackle this franchise (save for Spielberg, obviously). His direction does elevate certain scenes in how they render an otherwise predictable set piece in a more innovative way. His framing and compositional choices often make for more engaging palettes that are visually interesting at least. He bestows a sense of weight to the dinosaurs which has been missing for too long and has a better sense of motion when it comes to cohesively editing each action sequence together. His shots seem genuinely motivated as opposed to just leaving empty space for the CGI to be rendered later.

Bayona’s method of shooting also gives a slight dramatic touch to some action scenes and comes close to instilling some much needed gravitas to the character moments of the film. But this is thrown out of balance by the movie’s tonal inconsistency. It’s not that a blockbuster of this scale can’t have comedic touches or moments of levity, but those moments in ‘Jurassic World: Fallen Kingdom’ are so simplistic and repetitive that they ultimately undercut the film’s attempts at high drama.

But worst of all, the film commits the unforgivable sin of wasting Jeff Goldblum, which is simply not acceptable.