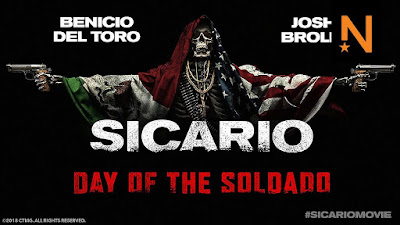 "You've got no reason to trust me. But trusting me is the only way you're going to say alive."

In many ways 2015’s ‘Sicario’ was elevated by the sum of its parts, which is not to take any credit away from Taylor Sheridan’s efficient and affecting screenplay. But I think the real distinctive qualities of the movie come from the likes of Roger Deakins amazing cinematography, the late Johann Johannsson’s breath taking score, Emily Blunt’s compelling performance and the always mesmerising direction of Denis Villeneuve. It’s sequel has lost all of these elements, retaining only Sheridan as its writer, which forces me to exercise a degree of caution in my expectations.

FBI agent Matt Graver (Josh Brolin) calls on mysterious operative Alejandro Gillick (Benicio Del Toro) when Mexican drug cartels start to smuggle terrorists across the U.S. border. The war escalates even further when Alejandro kidnaps a top kingpin's daughter to deliberately increase the tensions. When the young girl is seen as collateral damage, the two men will determine her fate as they question everything that they are fighting for.

Given that it is missing so many key elements which made the first film remarkable, ‘Day of the Soldado’ is unlikely to ever replicate the greatness of its predecessor but at the same time it could easily morph into something different but distinctive in its own right. Unfortunately ‘Day of the Soldado’ finds itself wedged awkwardly in between to two scenarios, never quite fulfilling either role. Too often the film tries to mimic its predecessor through surface level elements only, copying its aesthetic elements without ever seeming to fully understand why those elements were originally put in place.

Perhaps the most striking example is how ‘Day of the Soldado’ seems at ease with depicting violence and scenes that are disturbingly brutal on both a visceral and moral level. Though this is effective in conveying the ugliness of the world it wants to depict, there’s no craft to justify the shocking nature of what the film is depicting, no thematic undercurrent for it to serve. Instead it’s just an unnecessary parade of unpleasantness with no compelling features or intriguing narrative.

You can find this distinction in how rarely the film employs any sense of restraint. ‘Sicario’ featured its fair share of horrific scenes, but was often ambiguous in depicting said horrors to their full extent. This was because Villeneuve was aware that the violence itself was not the point as much as what the mere presence or knowledge of that violence meant for the film’s narrative. It would be pointless to waste time depicting it since it’s so clearly not what the movie is concerned with. The same cannot be said for the sequel which seems to use this violence as a crux in such a way that it just feels pointless. Ironically in focussing more on the brutality they rob it of its weight. It’s more exploitative than meaningful.

It may be unfair to a certain degree to repeatedly compare ‘Day of the Soldado’ to it’s predecessor but then again the movie itself repeatedly draws that comparison itself. There are so many visual cues and stylistic choices lifted straight from the first film to such a degree that it creates this sense that the movie is frightened of ever trying to deviate from the aesthetic of its predecessor. It constantly reminds you of the elements that were done better elsewhere. 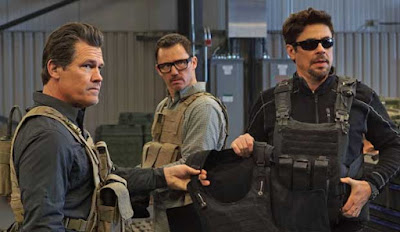 All of this weighs down a film which, at times is strikingly competent in how it goes about staging its action. There are certain set pieces littered across the film that contain an effective amount of tension and visual flair. Director Stefano Sellima keeps the events clear and cohesive, framing his characters as the focus of each set piece and making their state of mind a priority as they are two fascinating subjects. Brolin and Del Toro also portray a great dynamic in their ensuing conflict over the course of the film. Their performances here are definitely worthy of their previous efforts of bringing Sheridan’s script to life.

I wonder if even Sheridan himself seemed to realise within this story the characters themselves were far more worthy for intrigue than any thematic arc. While the characters themselves have a decent amount of depth bestowed upon them, there’s little to no expansion on theme or purpose. Even the character work isn’t enough on its own to justify the film’s runtime, let alone the parade of heavy subject matter that it treats with absolute severity.

As well as that though, the screenplay is structured heavily around the characters. Ultimately though this creates a plot that feels awkwardly weighted in the third act, while dragging for the two that came before it. In fact the third act of ‘Day of Soldado’ feels so rushed and contrived that it almost breaks the suspension of disbelief within the film as a whole. At the very least the movie was attempting to be measured on some level, only to then depart from that approach completely and create a severe case of cognitive dissonance.

At its best ‘Da of the Soldado’ is a hollow imitation of ‘Sicario’. At its worst the film is a shallow and exploitative throwaway.