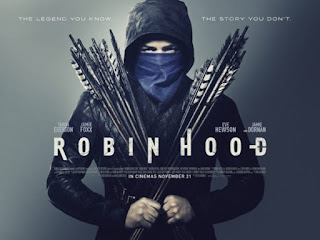 "You were a lord, but now you get to be a thief. And I ma gong to show you how."

Sometimes you have to stare in disbelief at studios as they undertake an endeavour that seems utterly destined to fail. One would think that when not even Ridley Scott can adapt Robin Hood to work as a compelling 21st century cinematic property that studios would at least wait before rushing into another ill-conceived attempt to launch a franchise with the popular folklore character. But apparently the critical and financial disaster that was Guy Ritchie’s ‘King Arthur’ from 2017 was not strong enough of an indicator that sometimes you can simply choose not to make a movie.

Having gone from a life of luxury to a war hardened crusader, Robin of Loxley (Taron Edgerton) returns to his homeland to find its people burdened by the oppressive and ruthless Sheriff of Nottingham (Ben Mendelsohn). Along with his Moorish commander Jon (Jamie Foxx), Robin forms a rebellion to put an end to the unjust regime and foil to Sheriff’s plots.

There are many apt comparisons you could make between 2018’s ‘Robin Hood’ and the aforementioned ‘King Arthur’ movie that was released last year. Both, despite being set in the traditional time period for each respective story, are clearly made with an intent to modernise the properties. From the sets and costumes that mimic more modern aesthetics to the way both of them flaunt their own “grittiness”, there’s a distinct need within both efforts to distance themselves from the old-fashioned takes.

What the two films also share is a certain uniqueness to their failings. For all its issues ‘King Arthur’ was competent on a bare technical level. Ritchie did indeed commit to his vision, but that vision happened to be a bloated and self-serious farce. The same can be said of ‘Robin Hood’, the story choices it makes are executed with finesse and occasional competence, but the story choices in question are simply baffling in how anyone involved in making the film thought they could function as a sincere work of cinema.

Much of the modernisation of this ‘Robin Hood’ is clearly attempting to evoke imagery rooted in the 21st century. From the medieval guards inexplicably wielding riot shields to the towering streets meant to evoke the kind of setting one would find in an urban thriller, no chance for an obvious modern day parallel is wasted. On the one hand it’s admirable to see a film commit so wholeheartedly to this thread, which is exactly what ‘Robin Hood’ does. However the cognitive dissonance between the setting of a folklore tale and a grounded political allegory is too glaring of a gap to overcome. Despite its best efforts the script never marries to two tones and the result is awkward at best and unintentionally hilarious at worst. 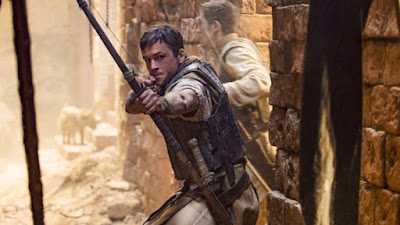 The pinnacle of this absurdity is a sequence showcasing Robin’s time in the crusades which is shot, edited, sounded and even colour graded to mimic the media depictions of the Iraq/Afghanistan Wars. Even the structure of the sequence follows the patterns of something set within modern warfare. Troops engage in house sweeps with longbows positioned in place of rifles, lines of soldiers are scattered by overhead “sniper” fire and crossbows are shot with the urgency of machine gun turrets. They even find a substitute for heavy artillery which decimates the area in the form of catapults. It’s nothing short of an exploitative and lazy attempt to make the story feel relevant without putting any actual thought into the ramifications of the parallels being drawn.

See, there is nothing inherently wrong with obvious allegories (I certainly couldn’t profess to be a fan of Darren Aronofsky if there was), but the subtext within ‘Robin Hood’ doesn’t have any underlying narrative to justify itself. It refuses to develop or discuss its own allegories on any meaningful level. That means that all the film has are a series of bluntly drawn metaphors that don’t connect to one another or the central narrative in any significant way. It is all well and good staging your medieval crusade to look like the Gulf War and adding in a backstory of Robin being conscripted to the army for Vietnam War parallels, but what is any of it really serving?

With all that said, reading into the allegorical references of ‘Robin Hood’ may be giving the movie too much credit. Save for some evocative and tonally confused imagery, what we have here is an unimaginative and uninspired retelling that overtly mimics the likes of ‘Batman Begins’ in terms of how it tries to present its origin story. The dialogue is either purely functional in serving exposition or tacky one liners. The characters are all one dimensional props that the writers seemed to hope would be carried by their own recognisability in popular culture (someone needs to tell these people that there aren’t any die hard Little Jon fans who will cheer in recognition of the name). The performances are mostly static with none of the promising actors reaching beyond their normal state. The one exception is Mendelsohn as the Sheriff who seems to be in a completely separate movie, chewing the scenery to pieces with comical effect. He’s evoking Alan Rickman’s performance as the Sheriff, but instead finds himself in a film insistent upon treating his pantomime routine with complete and utter severity.

Tonally confused doesn’t even begin to describe the mess that is 2018’s ‘Robin Hood’, a derivative and uninspired mess with many misplaced attempts at modernity.