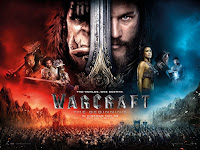 "If we do not unite, our world will perish."

First things first, I don’t play Warcraft, I don’t know anything about Warcraft and I don’t really care about Warcraft. The only knowledge I really have comes from that episode of ‘South Park’ and I can’t help but think that such an excuse isn’t enough for me to proclaim myself as someone who is inundated within the Warcraft mythos. That being said, I like Duncan Jones as a director, his previous films ‘Source Code’ and especially ‘Moon’ are excellently crafted thrillers. So going in to ‘Warcraft’ my expectations were mixed, I wasn’t really knowing what to expect.


The peaceful, human realm of Azeroth is invaded by Orcs, who are fleeing their own, decaying world. Despite individuals on both sides trying to broker peace, war becomes unavoidable.


So as I said, I went in to ‘Warcraft’ not knowing what to expect and I came out not really knowing what to think either. There are certain aspects of the film that I enjoyed very much and was very impressed by, and there were others that…..yeah. Firstly though, as I said, I like Duncan Jones a lot as a director this is an odd step for him to take. ‘Moon’ was a drama that consisted of Sam Rockwell and a robot played by Kevin Spacey. Then ‘Source Code’ was Jake Gyllenhaal stuck in the same situation on a loop (‘Groundhog Day’ syndrome). So it is quite a leap from films like that to heading a giant fantasy franchise like ‘Warcraft’.


The good news is that it seems like Jones hasn’t let the studio push him around when it comes to how he directed the film, because ‘Warcraft’ still feels very much like a Duncan Jones film. The way it’s directed manages to separate it from the style of Peter Jackson that has dominated fantasy films ever since ‘Fellowship of the Ring’ first blew everyone away in 2001. Is ‘Warcraft’ as good as that? No, not even close, however I would say it’s slightly better than ‘The Hobbit’. Mainly because of the way that Jones uses his special effects, unlike the weightless feel of other CGI heavy fantasy epics this one does have a certain grounded nature to it and the effects in question are exquisitely detailed and very consistent. The result is something that never quite makes you believe that what you are seeing is actually real, but isn’t distracting from the film itself.


So while the film may be a treat on a visual level, sadly ‘Warcraft’ is dragged down by a heavy handed, overstuffed and somewhat cumbersome script. It’s trying to balance so many storylines and characters that it can’t quite keep a hold of all of them and make me care for any of them. As epic as it all is, when two armies crash together and when two species try to unite, I never really cared about any of it. Certain characters may warrant more screen time but ultimately they are pushed aside in favour of telling a much larger story.

I have to give credit to the film for trying to create an even balance between each character and world. There isn’t necessarily a clear cut protagonist and that does tie in with the films central theme of forging alliances and unity. But as I said the downside to that is that while the film creates the impression of a huge and teeming world, it lacks any intimacy and therefore it is difficult to become emotionally invested within the story, or sympathise with any of the characters when you feel as if you still hardly know them. The script of this film is what you would get if you tried to condense the first season of ‘Game of Thrones’ into one movie, it’s just too much, there are too many characters, too many subplots and it all inevitably gets lost amid a sea of battles and expositional jargon.


In terms of performance it’s a decent assortment. There wasn’t necessarily anyone that stood out but at the same time no one embarrassed themselves, each actor was committed and maybe I would have liked to see what they could have done with their characters if they had more time to devote to them. I suspect there are many Easter eggs to be found within the film for any ‘Warcraft’ fans and maybe that will help them appreciate the film more for what it is. Again it goes back to the fact that Duncan Jones seems to know this universe, he knows what fans want from it and how to deliver it.


While competently made and acted, ‘Warcraft’ is held back by an overabundance of storylines and characters, lacking a central focus and wondering astray too often. If it helps though, it's still the best video game movie of all time.