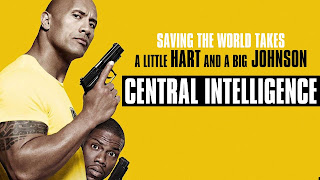 "I got a plan, it might get us both killed but if it works it'll be a totally boss story."

Okay I can immediately say that regardless of the quality of the actual movie, Kevin Hart and Dwayne Johnson’s (it feels weird without adding ‘The Rock’ to it, but I guess we can’t because he wants to be a serious actor now) latest comedy already wins the award for the best tagline of the year. ‘Saving the world takes a little Hart and a big Johnson’, never mind that Hart’s last film ‘Get Hard’ was an unmitigated pile of garbage, you’ve already got my attention.


In 1996 Calvin Joyner (Hart) was voted the most likely to succeed in high school while his classmate Robbie Weirdicht (Johnson) was the object of bullying and ridicule. Twenty years later Calvin works as an unsatisfied accountant and Robbie works as a fully-fledged CIA agent, only for them to reunite in order to save the world.


So with Dwayne Johnson rapidly being added to literally every film ever, to the point where we might as well just assume he is going to be in every movie from now until the end of time and add him to the cast list, (you’ve got ‘Moana’, ‘Baywatch’, ‘Fast 8’, ‘Doc Savage’, ‘Rampage’, ‘Shazam’, ‘Journey to the Centre of the Earth’, maybe that ‘Jumanji’ remake, possibly ‘The Wolfman’ remake, perhaps ‘San Andreas 2’ if that gets off the ground), it’s difficult to know what to expect with his latest comedy. As much as I like Johnson’s on screen charisma I can’t really think of an occasion where he has been playing a character other than himself. However in ‘Central Intelligence’ his performance differs slightly from his usual forte. In fact if anything out of the comedy pairing of Hart and Johnson it is Hart playing the straight man which may seem unusual to have the comedian in that role but Johnson’s character is quite simply hilarious, with his child like sensibilities and obsession for ‘Sixteen Candles’.

In fact the chemistry between Hart and Johnson is undoubtedly the highpoint of the film, I doubt anyone would try to dispute that. The relationship they have only adds to that, with Calvin being the only person who showed Robbie any kindness in High School, so by the time they reunite he idolises him. The resulting dynamic is both fun and inventive and though there is a worry that the entire movie would rely solely on the visual gag of placing them together (because one’s short and the other’s tall, get it?) it manages to avoid that for the most part.


The only problem is that the rest of the film is not nearly as funny as they are. It is miraculous because if this film put aside its attempts to have a complex plot or to be taken seriously as an action movie then the result could be a much more enjoyable movie. While the result here is far from a disaster and there are many good laughs to be had, it’s not nearly as funny as its two central stars promise it might be.


The emphasis on action soon drowns out most of the wit and charm of Hart and Johnson’s chemistry. Director Rawson Marshall Thurber doesn’t have the knack for creating visceral action or visual comedy (this is why every comedy movie should be directed by Edgar Wright until everyone else catches on) so the film’s comedy relies strictly on its two leads. I know I sound like I’m repeating myself but it really is annoying me, what director would look at a comedy pairing that so obviously works and then decide to devote an unreasonable amount of time to things that are not funny or even relevant.


While I understand that you need a plot to draw the two together I can’t understand why it needs to be explored in as much detail as it does. The film tires so hard to be a riveting and politically intriguing thriller but all it really does is distract from the comedy that should be front and centre. What’s worse is that with so much time and seriousness to these multiple story threads you would expect them to at least wrap up and lead to a cohesive conclusion, but they don’t. Instead you end up with a needlessly convoluted story with a shoehorned and clichéd message about bullying. But if nothing else ‘Central Intelligence’ is a decent summer comedy for the chemistry between Hart and Johnson, as well as that tagline.


Hart and Johnson work wonders, if only the rest of the film was as funny as they are.