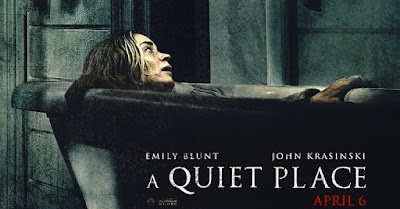 "Who are we if we can't protect them?"

I always get the sense that horror movies are the best genre from which to make a directorial debut. Obviously it depends upon what each specific director wants, but it seems that horror leaves room to make a particularly strong showcase of a filmmaker’s talent. To lure an audience in and effectively manipulate them through directorial prowess, it takes a particular skill that has been proven to translate well into future projects. It also seems to leave more room for experimentation with the form and social commentary, which is even better if you want to make a mark.

In the year 2020, most of Earth's human population has been wiped out by a race of sightless, extra-terrestrial creatures with incredible hearing ability. In this wasteland, Evelyn (Emily Blunt) and Lee (John Krasinski) and their children must navigate their lives in complete silence out of fear of being the elusive creature’s next victim, where every day is a fight for survival.

There are certain elements of ‘A Quiet Place’ that are so brilliantly constructed that I feel like they should be studied. Personally I found the most striking aspect of the film to be how it continually masters the art of short form tension, where each scene or set piece is assembled through the enticing sense of curiosity that soon turns into unparalleled fear and dread. The tension is palpable and always engaging, to a point where I was honestly glad the film after 90 minutes because any longer would likely be too exhausting.

The film has less of a story and more a series of incidents relating to how the family at the heart of the narrative navigates this dystopian land. It seems as though this method would feel repetitive or aimless, but the film’s structure does a marvellous job at keeping these set pieces focussed and purposeful. It’s also a brilliant display of escalation within storytelling. Krasinski opens the film safe in the assurance that audiences will be more intrigued than frightened, so he teases the information and grounds the scale of each horror set piece. But as the viewer is gradually immersed into the world and what its stakes are the direction broadens the scope of what exactly is taking place.

The cast are incredibly impressive all round, with Blunt and Kransinski capably hitting the balance between desperation and determination as they struggle to protect their children. To convey as much emotion as they do with such limited dialogue is no small feat, but there was no point at which I questioned Evelyn and Lee’s intent or motivation. Despite the stigma for child actors in horror films Millicent Simmonds also gives a stunning performance. She has a different balancing act to perform than that of her older co stars. In Simmonds case she manages to express a sense of familiarity with the premise of the movie, reflecting how the character has lived with this environment for most of if not her whole life, but also retain that shred of innocence that makes the danger she is in so evocative. 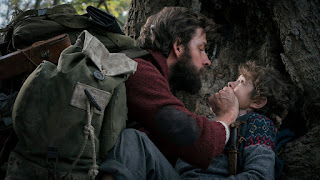 But often it’s the sound design that is just as expressive as the actors of the movie. The movie’s sound has to function on both an atmospheric and visceral level, to further an immersion into the world in which the story takes place while also conveying the individual actions that take place within that world. Silence is used so meticulously and deliberately that any noise becomes jarring to an uncomfortable extent. On numerous occasions found myself growing nervous through nothing more than the lingering silence of the movie, stuck in a state of perpetual anticipation.

However, the way sound is used to convey fear within ‘A Quiet Place’ isn’t always so faultless. It does occasionally succumb to the annoying trait many horror movies have in which a jump scare has to be marked by some cheap and overly manipulative sound effect. It’s especially frustrating here given how masterfully the tension was derived from the build up to certain scares, only to then spoil them slightly. Luckily there are a good number of instances where this doesn’t happen and the scene is all the better for it.

Another issue comes from the flaws within the film’s internal logic. Just certain plot contrivances that, while certainly not detrimental, leave a little to be desired in terms of story construction. Perhaps that is another benefit of the film only coming in with a 90 minute runtime. It doesn’t leave the viewer with a lot of time to question the functionality of the narrative and why certain actions don’t have the weight and consequence of others. I’d refer to them more as plot contrivances rather than plot holes since there is likely some explanation of sorts, it’s just that the movie did a poor job conveying that explanation.

‘A Quiet Place’ is a chillingly strong debut and that effectively delivers scare after scare.