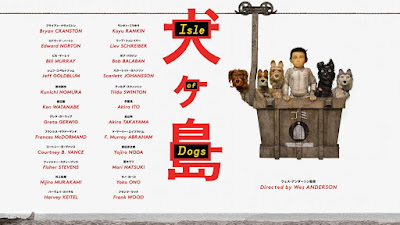 "A long rickety causeway over a noxious sludge marsh leading to a radioactive land filled with toxic chemical garbage. That's our destination."

It’s no secret to any of my friends (yes I can sense your surprise, I have friends) that I adore Wes Anderson and his work. I admit it can be self-indulgent and perhaps a little pretentious at times but his movies are so exquisitely crafted, endearingly charming and feature such a quirky sense of humour that I can’t help but fall in love with all of them. His return to stop motion animation is certainly something to get excited about.

By executive decree, all the canine pets of Megasaki City are exiled to a vast garbage-dump called Trash Island. This prompts 12-year-old Atari to set off alone in a miniature Junior-Turbo Prop and flies across the river in search of his bodyguard-dog, Spots. There, with the assistance of a pack of newly-found mongrel friends, he begins an epic journey that will decide the fate and future of the entire Prefecture.

It would come as little surprise to me if I discovered that Wes Anderson sees the world in stop motion, because he seems so inherently comfortable with the form. His films are all meticulously framed and eloquently composed so as to create picturesque tableaus. When combined with the beautifully constructed models and set design within ‘Isle of Dogs’ every solitary shot of the film is magnificent to behold. I’m not sure what impresses me more, the scope or the detail. Anderson brings us expansive and varied landscapes with the same care as he brings the most intimate of details.

Literally everything has a tactile dexterity to it, which somehow works to keep the viewer grounded in the film’s reality whilst also being acutely aware of its metanarrative. An example is how dryly humorous it is to see cotton wool used as a signifier of scuffles and fights, but I never questioned its placement or saw it as something that took me out of the story. There’s also such acute attention to the way Anderson’s titular dogs move and interact. It’s obvious that a great deal of care was put into animating the four legged characters and bestow each of them with their own distinct physicality.

Another strange contradiction within the films craftsmanship is how it defies to laws of animation whilst also playing to them. Dramatic angles, harsh lighting cues and dynamic camera moves all come into play, serving a great stylistic function in any given moment of the story. Obviously if you know even the slightest thing about stop motion animation you’ll know how excruciatingly difficult it is. So to bring these additional aspects into the process as well is even more commendable.

But despite these eccentric flourishes these is unquestionably a great deal of severity to ‘Isle of Dogs’. There’s a good deal of violence that feels sudden and harsh due to its stark contrast with the quirky charm that permeates much of the film. The dramatic moments have a similar effect, as the film suddenly presents a bleaker picture that is certainly effective. Luckily Anderson has such tight control of the tone of his film that these shifts never feel jarring or uncomfortable. They feel like natural developments in the narrative that serve to give it a richer depth. 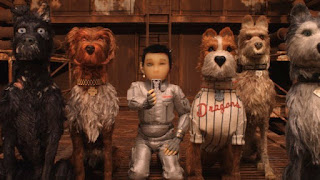 That narrative happens to be somewhat simplistic in structure, but the eccentric details that Anderson peppers throughout mean that it is never unengaging. If anything I think the straight forward plot ultimately complements the film as a whole since it gives Anderson more time to provide nuances to his characters and allow them to develop. I spoke earlier of their distinct physicality but they share that uniqueness in their entire personas as well. Even amid this epic ensemble I find myself remembering brilliant details about almost every character.

I think it also helps that the film has such a talented voice cast to breathe life into each of these characters. Of the gigantic cast (all of whom are stellar) there are some noticeable highlights. Bryan Cranston conveys such a brilliant sense of world weariness in how he voices the character of Chief. Great Gerwig brings a lovable sense of determination to her role, while Bill Murray and Ed Norton ooze energy with every spoken word. Tilda Swinton is also great but that should come as no surprise, nor should the way Jeff Goldblum’s inclusion makes everything infinitely better (it’s a proven fact, look it up).

As much as I adore ‘Isle of Dogs’ there are certain flaws to it. Obviously if you are looking for naturalistic cinema then this isn’t the movie for you, and even as someone who is accustomed to Anderson’s style I have to admit I found its eccentricity to be a little alienating at times. The film is also slightly unfocussed in terms of establishing who the main characters are and what the main themes of the story are. It’s not until the halfway point that the film actually starts to develop its conceits and characters since the first half is so devoted to establishing the world in which the story takes place. But at the end of the day it should come as no surprise that the film is magnificent overall.

Eccentric and playful in all the right ways, whilst also including a dramatic heart, ‘Isle of Dogs’ is an exquisitely animated and meticulously crafted delight.