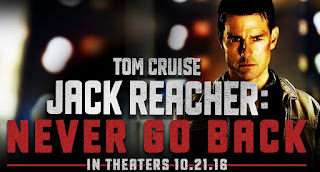 "You think you're above the law, but I'm not the law. So you should start running because I'm gonna start hunting."

Despite being 54 years old Tom Cruise has managed to maintain his position as the action star of a generation for almost two decades now (which would in fact make him the action star of multiple generations). Not only is the quality of Cruise’s action output impressive but so is its variety, from hard edged thriller like ‘Collateral’, futuristic science fiction in the form of ‘Minority Report’ and ‘Edge of Tomorrow’ not to mention the cornerstone that is the ‘Mission: Impossible’ franchise. So how does this sequel to the rather forgettable 2012 thriller ‘Jack Reacher’ stand?


After dismantling a human trafficking ring, former military investigator turned vigilante drifter Jack Reacher (Cruise) returns to his old military headquarters to meet Major Susan Turner (Cobie Smulders), who has been assisting him in his investigations, only to learn that Turner has been accused of espionage and detained. Now Reacher must uncover a conspiracy to prove her innocence.


It doesn’t bode well that my main memory of watching the first ‘Jack Reacher’ was that I was continuously wondering how on earth they contracted Werner Herzog to play the main villain of the film. Mind you, this was also a man who once cooked and publicly ate his own shoe so in retrospect anything is possible from the German art house director. In many ways that is how forgettable and generic I found the first ‘Jack Reacher’ to be, to a point where even trying to provide a brief summary of my thoughts on it ends up with a tangent about Herzog instead. He was so great in ‘Rick and Morty’ wasn’t he?


Anyway, while I feared from the outset that ‘Jack Reacher: Never Go Back’ would only result in another disposable sequel the set-up did evoke some hope that it could be something more. As well as allowing Reacher, the quiet loner, to pair up with the equally competent Major Turner and his maybe/maybe not daughter to form a sort of makeshift family. We’ve seen that kind of dynamic in other great action movies such as ‘Aliens’ and ‘The Outlaw Josey Wales’, but sadly when it is applied to ‘Jack Reacher: Never Go Back’ it ends up being the most interesting and inventive aspect of the entire film by a wide margin.

That really is a shame, especially due to the strength of the cast, particularly Cruise and Smulders, who are most definitely giving their all to the roles. Cruise is once again able to easily convey a sense of great skill and confidence with his performance, rarely leaving the viewer in doubt of Jack Reacher’s abilities. But Cruise may be outmatched by Smulders here, as she drives home the concept of her own character being on the same level as Reacher, so despite the titular characters own god-like status from the way other characters refer to him, we are never left bewildered by Turner’s ability to meet his level of skill.


But as I said the film can’t capitalise on either of their talents, not the interesting dynamic they based their premise on because for the most part ‘Jack Reacher: Never Go Back’ is an extremely formulaic and by the numbers action film, one that, similarly to its predecessor, I can’t imagine myself remembering much in the future. The plot is basic enough to prove the writers an excuse to send their characters from city to city, throwing assassin after assassin at them. But as a whole the film lacks any significant sense of pacing, structure or tonal consistency. All in all it equates to one semi-competent action scene after another, with a few jarring comedic sequences in between and a few shallow attempts at development.


In fact almost every aspect of the movie feels underdeveloped in one way or another, from the character arcs, how the story is told to the audience as well as the actual plot itself and the general direction. None of it ever ascends to become anything than just a one dimensional sequence and as a result additions like Reacher’s daughter and the whole shady conspiracy feel like ploys to pad the runtime rather than actually further the story being told. Unfortunately a lot of this seems to be the fault of director Edward Zwick, whose previous directorial outings include sweeping war epics such as ‘Glory’ and ‘The Last Samurai’. Here though, his control of the camera not only seems painstakingly unmotivated, but also fails to be innovative in any way, meaning that a lot of the action scenes suffer as being generic or just plain forgettable.


A paint by the numbers action movie that would be fun if it were not so despondent at its own plot, characters and action scenes.