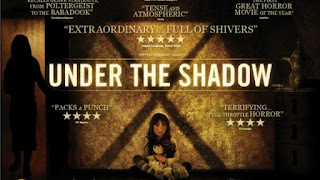 "They'll always know how to find you."

You can achieve a lot by taking a familiar story and moving it to a location that holds more resonance for that particular narrative. Set in Iran, filmed in Jordan and directed by Iran born and London based filmmaker, ‘Under the Shadow has recently hit headlines for being Britain’s entry for the Academy Award for Best Foreign Language Film and not only is it thoroughly deserving of earning a nomination but it could be the most worthy recipient of winning that award so far this year.


In 1980s war-torn Tehran, a mother (Narges Rashidi) and her daughter (Avin Manshadi) are left alone. A missile hits their apartment building and, while it fails to explode, reality starts to blur as the young girl believes the bomb may have brought a malicious entity with it.


What makes a film like ‘Under the Shadow’ so spectacular is its ability to transcend any specific genre and be just as excellent a domestic drama as it is a supernatural horror film. It uses both aspects to enforce and complement each other, using the culture of its environment to advance the plot and fill in the details that inform the more complex themes, while also using the horror elements as a way to epitomize all of these conflicting social ideas.


Take this as one example, if this were any other horror movie the main character could simply flee into the streets to take refuge from the demonic spirits residing in her house. But in this environment the warzone around her, combined with the threat of being arrested by religious police who cannot allow a woman to be out on the streets without a hijab. It is in this sense that the movie evokes a sense of utter entrapment in the form of social repression as well as demonic possession, combined with an eerie feeling of intruders due to the falling bombs and unnatural presence.


Not only do the surroundings add to the movie’s atmosphere and plot, but they also advance its characters as well. Narges Rashidi is given a lot to work with which is just as well because her performance is a complex and immensely engrossing one, that balances an outspoken nature with a sense of vulnerability and these horrors that surround her serve as a way to reflect her own fears such as her perceived inadequacy to be a mother, that are also highlighted by the performance. The way it progresses is even more impressive. Rashidi’s performance is what turns ‘Under the Shadow’ from a normal horror film into a social drama of a woman living under Sharia law. Even the title itself can reflect both the supernatural and cultural ramifications of the story.

These conflicting aspects are also reflected by the superb direction of Babak Anvari, who employs an approach reminiscent of neo-realism for the earlier, character heavy scenes but then gradually introduces a greater sense of expressionism with disorienting and unnerving angles being used throughout the movie. Sometime the camera itself seems to stand at a tipping point, a moment when the audience can feel the slow transgression from reality to nightmares on both a visual and atmospheric level. The result of this almost seamless blend is that inevitably the audience starts to question what a real threat is and what a perceived one is. Are these hauntings real presences within the apartment or just the projections of the characters own fears?


Either scenario is plausible due to how well-crafted the mother/daughter relationship is that underpins the movie. While many have drawn comparisons to Jenifer Kent’s ‘The Babadook’, ‘Under the Shadow’ is able to utilise its surroundings to carve its own identity while tackling the same subject. Like ‘The Babadook’ we watch in terror as the seemingly safe place of domesticity is transformed into a nightmarish landscape. But of course with ‘Under the Shadow’ the fact that the domestic location was in the middle of a warzone and repressive society only means that it serves to unnerve the viewer even more.


The sound design is also flawless, one that creates a cacophony of noise from the exterior sounds of sirens, riots and gunfire to the benign domestic noises and then proceeds to use it as a weapon that only increases the tension and terror at any given moment. When there’s nothing left but silence it has an even more unnerving effect upon the viewer. It all seeks to add to the atmosphere, combined with the excellent performances, thematic weight that comments upon the trauma of war and repression as well the brilliant filmmaking on hand that create a film which leaves no room for escape, both for the characters and audience.