"Look at this place, it's made of money."

Well it’s unpopular opinion time, because while I think that there is a lot to like and admire in Martin Scorsese’s 1995 mobster movie ‘Casino’ I’ve always been somewhat underwhelmed by it in comparison to how highly it seems to be regarded by most people. Whereas most new Scorsese movies were able to break new ground for both the director and his actors, there’s something overtly familiar about ‘Casino’ that just holds it back for me.


In 1973, sports handicapper and mafia associate Sam Rothstein (Robert De Niro) is hired by the Italian Mafia to oversee the running of day to day operations in their massive gambling empire in Las Vegas. But he has to deal with personal as well as professional issues from his temperamental friend and associate Nicky Santoro (Joe Pesci) to his scheming, self-absorbed wife (Sharon Stone).


To this day ‘Casino’ remains the last collaboration between Martin Scorsese and Robert De Niro (as well as the last of three times Joe Pesci would also be alongside them) and it pains me to say that their last outing together, while admirable in many respects, simple does not live up to their other fantastic projects together. Not only does ‘Casino’ fail to give the two immense talents any new material to work with or new ground to cover, but it also somewhat repetitive, structurally insecure and at 178 minutes, oddly paced as well.


But going back to my first complaint, if ‘Casino’ was from any other director it would be much easier to judge it as a singular entity. But the fact that it came from Scorsese, a post-‘GoodFellas’ Scorsese as well, severely limits its potential to stand as a truly great film. While all the ingredients are there they all feel so derivative of the director’s previous work from the plot to the stylistics, from the character dynamic to the tone of the movie. The easiest way to put it is that ‘Casino’ simply feels like a less tightly constructed and less thematically resonant version of ‘GoodFellas’.


But as I said before there is still plenty to admire about ‘Casino’. The film is at its best when it adopts a more documentarian approach to executing its story, taking a more hands on approach that immerses the viewer into the mad cap and deadly world of daily mafia life. Whereas Scorsese’s other films reflect upon the long term damage of violence ‘Casino’ attempts to examine the short and explosive bursts of it, an impression it achieves rather effectively. 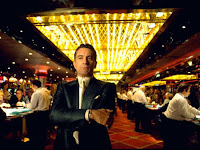 However the downside to that is the inherent lack of depth that permeates the entire film. With so many differing components each moving at breakneck speed Scorsese is unable to thoroughly flesh out each aspect, meaning that as a whole the picture feels looser and not quite as immersive as it could be. Furthermore not all of these components are as convincing as each other, resulting in a movie that frequently feels sprawling and uneven. Despite a standout performance from Sharon Stone the subplot involving her relationship with De Niro comes across as rushed and almost incomplete, as if it is treated as an accessory rather than a fully realised aspect of the story.


Of course, Scorsese would later turn these criticisms into the foundation of another masterpiece but those elements were at their best in that particular production due to how they were thematically linked to the main character it was studying, and reflective of his own personality. But seeing them on display here only results in a somewhat hollow movie. While I never doubted that what was being portrayed on screen was on fact an accurate portrayal of mafia life, the characters were all one dimensional and therefore I could never become thoroughly invested within this extravagantly crafted world.


While on the subject of extravagance though, that is truly one of the films biggest strengths. On a visual level ‘Casino’ is astonishing to behold, from the gorgeous set pieces to the beautifully composed framing as well as that wonderfully stylish 1970s palette. It goes without saying that Scorsese also injects that same unique blend of style and realism, that seems to be an instinctive talent for him by this point, to make the movie utterly magnetic despite its flaws. But as I said before this is all merely a re-tread of his more brilliantly constructed movies, even his two leading men in the form of Pesci and De Niro are simply retelling the same story. From Pesci’s temperamental and violent outbursts to De Niro’s more level headed approach and how the two conflicting forces regularly come to blows as a result.


From a distance ‘Casino’ is massively impressive and admirable, but on a personal level it fails to resonate on an impactful level and the story itself feels stylistically and thematically familiar.