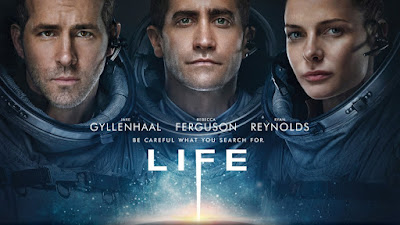 "We're looking at the first signs of life beyond Earth."

I do think the newest science fiction horror film ‘Life’ was unfortunate to come out this year. As if there were not already enough comparisons to make between this film and Ridley Scott’s ‘Alien’ it happens to be coming out mere months ahead of Scott’s next instalment of that very franchise, only further highlighting how similar they are. But regardless, when taken on its own how does ‘Life’ stand as a piece of filmmaking?


Astronauts (Jake Gyllenhaal, Rebecca Ferguson, Ryan Reynolds) aboard the International Space Station are on the cutting edge of one of the most important discoveries in human history: the first evidence of extraterrestrial life on Mars. As members of the crew conduct their research, the rapidly evolving life-form proves far more intelligent and terrifying than anyone could have imagined.


I think as long as you can accept that ‘Life’ aims to accomplish exactly what it set out to do and nothing more then you can enjoy this film to a good extent. It does fall into the trappings that so many other films with a similar premise have already done so, from ‘Alien’ to ‘Event Horizon’ but in terms of quality it probably slots somewhere between the two. There is nothing inherently wrong with it and there are not many surprises to be had with the film it delivers everything efficiently and competently.


I suppose the biggest detriment to ‘Life’ is simply that other movies exist, other movies that I was reminded of and recalled how much better they were. But when taken on its own ‘Life’ is perfectly fine. If there is one thing I can really commend ‘Life’ on it is just how tightly paced it is. The film moves forward with great force to a point where I was very surprised afterwards to know that the film was 103 minutes long because it didn’t feel linger than 90. It is an excellently structured, self-contained story that is perfectly content to exist within itself.


What also elevates ‘Life’ is the strength of the cast. Though none of the characters have any real depth to them they are grounded enough to be relatable so there is some level of investment in the ensuing horror. The crew of the space station all have good chemistry with one another, with Jake Gyllenhaal, Rebecca Ferguson and Ryan Reynolds all pulling their weight. As well as this, despite not headlining the posters for the movie the rest of the crew such as Hiroyuki Sanada and Ariyon Bakare more than hold their own here.

As director Daniel Espinosa does a serviceable job. Granted one could go through each individual aspect of this film and note how they’re not quite as impressive as similar sequences in other films. The zero gravity establishing shots aren’t as great as those in Alfonso Cuaron’s ‘Gravity’, the sense of plapable tension isn’t quite as effective as Ridley Scott’s ‘Alien’, the urgency of the narrative isn’t quite as thrilling as Dany Boyle’s ‘Sunshine’, the list goes on. But Espinosa dos manage to integrate these various elements together very well and delivers them efficiently enough. He makes the sense of dread feel very real as the unknown life form develops and evokes an increasing sense of horror as both the crew and audience begin to realise what it is capable of.


The CGI in ‘Life’ is also worthy of praise, brilliantly compositing its actors into the environment that is the space station while incorporating a number of excellent practical effects as well. Once again this is in large part due to Espinosa’s skill behind the camera but credit should also go to cinematographer Seamus McGarvey (whose credits also include ‘Atonement’, ‘Avengers Assemble’ and ‘Nocturnal Animals). He shoots the first section of the film with a crisp and graceful look that only makes the visceral horror of what comes later all the more impactful.


The only downside to all of this once again comes with how conventional ‘Life’ feels in its plot. Not just when compared to other films in this genre but just in general the story feels highly predictable. Though the various twists in the plot are well engineered none of them could be labelled as shocking or that surprising. They help move the story forward but rarely have an impact as great as it would seem the filmmakers want them to. None of the designs, ideas or concepts feel unique to the film either. It tells a conventional and widely known story very well, but never reaches beyond that. This is only made more apparent by the characters, whom as I said before lack the depth to convey anything new out of this premise. None of this is to say that it ruins ‘Life’ but it does feel like a wasted opportunity in some regards. With talent like this I was hoping for something that would stand out a bit more in the long run but as it is, ‘Life’ falls a bit short.


‘Life’ is an effectively told if not overly conventional take on a very familiar premise.