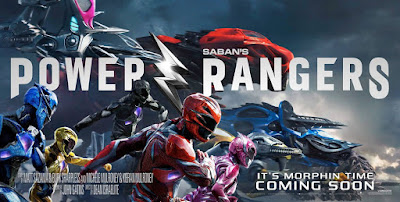 I don’t know if anyone’s noticed this before, but ‘Power Rangers’ is a little silly isn’t it? As shocking as it may be to learn that a franchise based on a group of teenagers being recruited by a giant floating head to dress up in colourful spandex and fight monsters, is the truth. I think even the biggest fans of the franchise will acknowledge that, so the key question for a movie that wants to please that fans while bringing in a new audience will always be, which direction do we go in?


Five ordinary teens must become something extraordinary when they learn that their small town of Angel Grove is on the verge of being obliterated by an alien threat. Chosen by destiny, these heroes quickly discover they are the only ones who can save the planet. But to do so, they will have to overcome their real-life issues and before it's too late, band together as the Power Rangers.


Given that studios are in the midst of raking anything that is even mildly nostalgic to anyone, it was inevitable that ‘Power Rangers’ would get the big screen treatment. But what surprised me about this 2017 blockbuster was that, despite being far from a good movie, it actually made an effort to be different. Rather than go the ‘Transformers’ or DCEU route of “They’ll see it because they’re dumb so we don’t have to bother making it good” philosophy I felt there was a clear attempt to make ‘Power Rangers’ stand out from the crowd. There are a lot of good ideas here but sadly few of them are integrated together well.


The first thing I immediately have to praise the film for is its main cast, who are excellent. Each performance feels appropriately grounded and establishes each Ranger is a unique personality with their own trials and tribulations. The first act does a very effective job of bringing these teenage social misfits together and lets them shine as individuals while giving them good chemistry together. In fact the first act is just a stone’s throw away from being about a brain, an athlete, a basket case, a princess and a criminal. It goes without saying that it’s not nearly as well developed or as empathetic as what I’m referencing there but there is a clear inspiration.


Sadly though, this grounded first act feels like it came from an entirely different movie. The film as a whole feels so tonally inconsistent as wen deal with teen angst one minute and giant Zords by the next. That is not to say one can’t make a film that features over the top action and grounded character drama, but they need to have more in common on a tonal level to they don’t feel as jarring as they do in ‘Power Rangers’.

Not only does the film suffer on a tonal level but its pacing and structure seems wildly off as well. As I said the first act does an appropriate job of building and introducing the characters, then the second half follows their training and bonding but it seems to drag on for an eternity. The movie seems to get stuck in second gear and never moves forward at a faster rate. It’s just sitting in a static position and while it’s making us familiar with the characters and environments the narrative seems to have been put on hold for a good hour. Worse still is that when the narrative does pick up again there is only twenty five minutes of movie time left. The result is that we really do have the big screen equivalent of a ‘Power Rangers’ episode, twenty minutes of colourful, over the top, incomprehensible action and a plot so rushed I was struggling to keep up.


What keeps it entertaining through those long sections of nothingness though are the likes of Elizabeth Banks as Rita Repulsor. Now I do fully accept that Banks scenery chewing, gloriously villainous performance belongs in a completely different movie and only further adds to the tonal inconsistencies, I found it wonderfully enjoyable. Brian Cranston is surprisingly engaging as a pixelated head in a wall otherwise known as Zordon and Bill Hader’s voice work makes Alpha 5 not entirely annoying from start to finish.


Dean Israelite’s direction is decent for the most part, with nothing spectacular but nothing horrendous save for his overuse of Dutch angles (the last thing I want to be reminded of in a modern blockbuster is ‘Battlefield Earth’). The bigger question I have about the aesthetic of the movie is how much money Krispy Kreme Doughnuts have thrown at the makers because their inclusion in the movie might just take the spot of the most bafflingly obvious product placement in movie history. More so than the IHOP in ‘Man of Steel’, more so than the Bud-Light in ‘Transformers: Age of Extinction’. It really is astonishingly, glaringly, hilariously obvious.


‘Power Rangers’ is three decent movies smashed into one tonally confused but not entirely awful film.