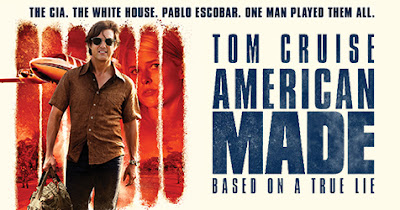 "My name is Barry Seal. Some of this shit really happened."

It’s weird how an actor with the star power of Tom Cruise is still capable of surprising you. Though we may think of him strictly as an overly serious action star his various forays into comedies like ‘Tropic Thunder’ or his ability to bring forth a more nuanced character portrayal like ‘Edge of Tomorrow’ as well as his explosively brilliant dramatic roles in ‘Magnolia’ or ‘Born on the Fourth of July’. He is never above defying expectation and it’s always wonderful to witness him doing it again.


In 1978 a disillusioned TWA pilot named Barry Seal (Tom Cruise) is hired by the CIA to take reconnaissance photos within South America. But soon he becomes embroiled in a drug smuggling plot headed by Pablo Escobar and before long Seal finds himself conning both sides of the law through his smuggling operations, risking his life for the sake of having the time of his life.


By no means is ‘American Made’ a mind blowing film, it has major structural issues and it’s central conceit isn’t something we haven’t seen better explored in movies like ‘Scarface’ and ‘The Wolf of Wall Street’. But it’s simply so refreshing to see Tom Cruise let loose in this way. He retains that ever charismatic screen presence that makes his characters so brilliantly watchable, but at the same time he manages to tap into that moral grey area that we rarely see from him. Here he plays a man who is unapologetically corrupt but understands himself well enough to know that this corruption is what fuels his basic needs every day. Once he gets a taste of living life on the edge he cannot bring himself to back away from it.


Where this whole attitude could easily descend into mere fantasy fulfilment, director Doug Liman strikes a good balance of tone throughout the movie. The story establishes Seal’s state of mind and his consistent drive to push things to the limit but also takes broader social swipes at the world that allows Seal’s operation to go unchecked. At the same time Liman injects the movie with a visceral thrill that makes the audience feel fully involved in the events as they unfold on screen. The drug running missions have an air of tension to them even if the movie continuously hammers in the point that Seal is enjoying almost every minute of it.


Part of that tension comes from Cruise himself, as the script gives him plenty of opportunities to see the character on edge. He sweats and panics, often losing his cool when the situation becomes too intense. Cruise’s frantic motions during these scenes of tension only further evoke a sense that there is every possibility of the situation spiralling out of control. This is the first time in a while where it feels as if Cruise’s performance alone actually added to the strength of the character rather than being a commodity to the script. 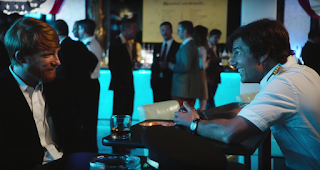 The problem with tackling so much is that the movie rarely digs beneath the surface of what is going on. It makes vague statements about its subject but never acutely dissects it. By playing fast and loose with the narrative Liman does give the movie an energetic feel but when it’s disappointing when the movie does come across something that feels like it would be worth exploring in more detail only to brush it aside.


But all in all the film throws in just enough to keep us interested for the length of its runtime and produces some terrific scenes in the process. Domnhall Gleeson appearing as the CIA agent who recruits Seal is a high point of the film, with Gleeson’s more diplomatic appraoch standing in perfect contrast to Cruise’s temperamental nature. Some of the side characters are neglected to a point where it feels as if the movie would have been better off scaling back and cutting them out. This isn’t to say there’s anything inherently wrong with these subplots and minor characters but they don’t add anything to the story.


As I said at the start, the film also possesses many structural weaknesses that make it feel both overstuffed and lacking in detail. Certain narrative beats are glossed over and others seem painfully drawn out, resulting in a second and third act that sort of collide in the middle of the movie rather than blending into one another. It also never seems to slow down which would be fine if the film insist that I feel a deeper understanding of these characters. For the most part Liman seems to know this and sticks to entertaining rather than trying to enlighten, but on occasions when the movie feels like its demanding empathy from its audience it was hard to take them seriously.


Though it has some noticeable flaws, ‘American Made’ is a highly entertaining ride that boasts one of Cruise’s best performances in years.