It figures that the year in which I’m too busy to give my official predictions on who I think is going to win each Oscar is the same year in which I probably would have got most of them right (and now there’s no way to prove it). It was a predictable affair as far as the winners went but if there is anything to be learnt from last year’s ceremony it’s that surprises are both overrated and not always welcome. It’s especially pleasing given that most of the favourites to win were thoroughly deserving both in the performances they gave this year and for their careers as a whole.

The ceremony itself was enjoyable overall in my opinion. Jimmy Kimmel did a decent job hosting yet again and even though I was expecting to be bombarded with a series of jokes relating to the mix up last year, it actually wasn’t too overbearing. It was also gratifying to see him take a stand and actually name drop the likes of Weinstein. Rather than tip toeing around the issue that was hanging over all of Hollywood during 2017 he tackled it head on. The whole jet ski running gag was also a funny addition. Though it does make me worry that in 10 years’ time people are going to look back on Gary Oldman and Sam Rockwell’s speeches out of context and wonder why both of them keep mentioning a jet ski. 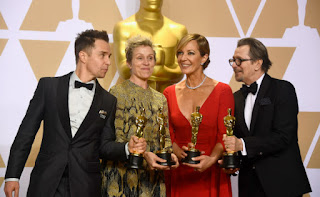 Speaking of which, the winners in the acting categories were all very well deserved amid a slew of extremely tough competition. Rockwell’s performance in ‘Three Billboards’ managed to evoke such hatred and empathy for the same character over a matter of hours that it’s absolutely worthy of awards recognition. Though I was slightly more partial to the likes of Laurie Metcalf or Leslie Manville winning Best Supporting Actress I was still pleased for Allison Janney as her performance was terrific. The same goes for Gary Oldman, because despite not being the biggest fan of ‘Darkest Hour’ personally, I think Oldman’s performance and career as a whole is absolutely worth some recognition at long last.

But the show stealer has to be Frances McDormand with a well deserved win among a plethora of hugely talented nominees who each gave incredible performances (seriously, Best Actress this year was a stunning line up). But it was her speech that resonated just as much as her amazing performance that put her there. It was a truly inspiring moment to watch and genuinely spoke volumes about where the film industry should be going in the future. For it to come at the end of such a troubling time in Hollywood made it all the more powerful. It lent some much needed perspective on how things are, and how they need to be. Plus I found her laughter to be both unnerving and weirdly adorable, so there’s that. 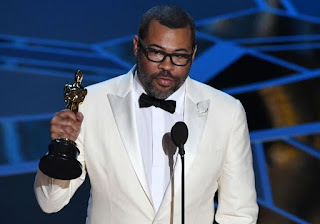 It was also a night of breaking barriers on account of Jordan Peele becoming the first African American to win an Academy Award for screenwriting. I figured that ‘Get Out’ would earn itself a victory here and as the night went on the thought of it taking home the top prize even started to cross my mind. The fact that Peele has achieved this with his first feature film is a testament to the power of fresh talent and for what it means to tap into the vein of social relevance through the art of filmmaking. I look forward to seeing his illustrious career as it unfolds.

More socially relevant presentations came in the form of a brilliant feature that spoke to why representation is so vital within the film industry. I could offer any argument that was given in those few minutes, but I think it’s best to just be reminded of what Kumail Nanjiani said. “Some of my favourite movies are by straight white dudes, about straight white dudes. Now, straight white dudes can watch movies starring me and you relate to that. It’s not that hard, I’ve been doing it my whole life.” So, we know who is hosting the 91st Academy Awards now right?

In other great news, Roger Deakins finally won an Oscar which is good considering that if his work for ‘Blade Runner 2049’ wasn’t rewarded with an Oscar I think I would have rioted (and by “riot” I mean “type angrily on the internet”). It’s great to see Deakins finally being rewarded after 14 nominations (most of which he should have won for by the way) and getting the top prize for what might be his masterpiece as ‘Blade Runner 2049’ truly is one of the most visually stunning movies ever made. It also took the best Visual Effects Oscar which was also thoroughly deserved. It was also great to see ‘Phantom Thread’ take home Best Costume Design. When your film is literally about the profession you’re nominated for I think you should probably receive an Oscar for it. I can also say it’s safe to bet that Mark Bridges probably didn’t think he would receive a jet ski due to his work on the film when he first signed up for it. 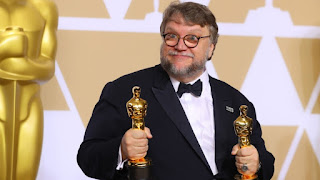 But the biggest winner of the night was Guillermo Del Toro and ‘The Shape of Water’. Del Toro’s work as an auteur has been astounding and it’s so brilliant to see him break through the stigma’s of awards shows by bringing a gothic fantasy romance about a woman falling in love with a fish (with undercurrent themes relating to repression, abuse and expression) take home the most awards as well as the biggest ones. Much like his long time friend Alejandro Innaritu did three years ago with ‘Birdman’ Del Toro picked up awards for Best Director and Best Picture. Can we also acknowledge how hilarious it is that Guillermo checked the envelope as he went up just to be absolutely sure? Though it may not have been my personal favourite of all the nominees, ‘The Shape of Water’ was a truly phenomenal and deeply personal movie that absolutely deserves recognition. Just to repeat, a movie about a woman having sex with a fish won Best Picture. How often does that happen?
Posted by Joshua Price at 16:49