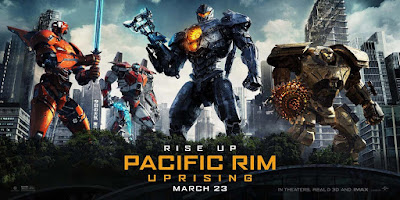 "This is the way the world ends."

‘Pacific Rim’ might be the quintessential example of how a director can elevate their material. The movie is little more than a showcase of giant robots fighting monsters, but rather than take the cynical or lazy approach, director Guillermo Del Toro injected a genuine sense of craftsmanship and sincerity to the movie. Yes it was big dumb fun, but it was also big dumb fun that had an acute awareness of itself and a creative team that refused to let its genre or high concept limit the amount of effort they put into it. So naturally here comes the corporate line sequel.

Jake Pentecost (John Boyega) is a once-promising Jaeger pilot whose legendary father gave his life to secure humanity's victory against the monstrous Kaiju. Jake has since abandoned his training only to become caught up in a criminal underworld. But when an even more unstoppable threat is unleashed to tear through cities and bring the world to its knees, Jake is given one last chance to live up to his father's legacy.

With all due respect to Steven DeKnight, he’s not Guillermo Del Toro. In fact ‘Pacific Rim: Uprising’ (yay for that generic title right?) is DeKnight’s feature directorial debut, which immediately puts the film as a whole at a disadvantage. DeKnight’s direction is fine but it really lacks the dexterity and weight that would give this sequel any chance of living up to its predecessor. There’s little variation to the way the fight sequences are presented, so as the film dragged on it became a monotonous experience that slowly wore away at my willingness to accept some of the more ludicrous contrivances of the script.

I understand that criticising a movie with the central premise of “robots punch monsters” for scripting issues seems like a non-issue. After all, no one is walking into ‘Pacific Rim: Uprising’ with the expectations of complex characters or an intricately drawn narrative. But it would probably be worth letting the makers of the movie know that as well.

When a movie is praised for “knowing what it is” it essentially means that the film is tonally consistent. In the first ‘Pacific Rim’ the action is the centre of attention, but the film also understands that it is obligated to devote some time to character progression. When that happens the emotions are broad, sincere and obvious. They’re not overemphasised to a point where they distract from the main even but also present enough depth to fill a necessary quota. ‘Pacific Rim: Uprising’ fails to meet that quota for half of its runtime, and then proceeds to let the attempts at character development detract from the action in its second act. 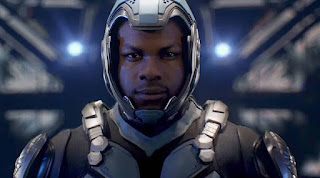 If anything a few of the turns that certain characters take during the movie are unintentionally hilarious. It seems as if the characters make decisions based on what suits the script rather than what would feel natural to their progression. But then again to garner any sense of what the natural progression would be for these characters is a challenge in itself. It’s not just that the people in ‘Pacific Rim: Uprising’ lack depth, but they also lack any strong characterisation at all. The script barely even establishes a precedent for who everyone is and what their dynamic is before suddenly shifting their personalities to try and move the plot along.

This makes it incredibly difficult for the actors to convey any sense of character with their roles. John Boyega is appropriately charismatic in a way that gels wonderfully with the tone the film wants to convey. But the script rarely gives him the opportunity to really bring that attitude to the forefront. Scott Eastwood seems somewhat stagnant, not really possessing much of a presence or purpose. Charlie Day is entertaining purely because I kept imaging his character was just Charlie Kelly who had somehow been drafted into a conflict involving giant robots. It’s much more plausible than the reality the film wants to present at least.

In fairness I wouldn’t accuse ‘Pacific Rim: Uprising’ of outright laziness because it does try in come regards. The fact that the plot is kicked off by a rationale that isn’t just “the portal from the first film opened up again because reasons” should be proof that the script at least wants to serve the audience in a way that feels rewarding. The problem seems to be that the script isn’t sure on how to present those differences within the plot. There are plenty of new avenues that could yield some potential storytelling and accommodate the action fans want to see within ‘Pacific Rim: Uprising’, but the script can’t find the methods to convey those routes.

A shell of its predecessor, ‘Pacific Rim: Uprising’ isn’t what I’d call awful but it’s also far from what I would call worthwhile.