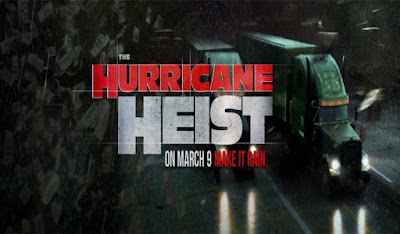 "We're about to be crushed by the biggest storm of the century."

Cast your minds back to 2001, when the very first instalment of one of the world’s most successful franchises came onto our cinema screens. ‘The Fast and the Furious’ was a thinly veiled remake of ‘Point Break’ about drag racing (perhaps the least cinematic sport imaginable) and probably would have been forgotten by now had it not spawned the juggernaut of a film series that followed. Well apparently it’s still 2001 because the director of said movie is back with a film that feels like it came from the early 2000s in every regard.

A team of tech hackers embark on a $600 million robbery from a coastal U.S. mint facility at the same time a disastrous Category 5 hurricane is set to strike. The remaining people left in the deserted beach town are a meteorologist (Toby Kebbell), a Treasury agent and the meteorologist’s ex-Marine brother. Together they not only must survive the hurricane, but also stop the mastermind thieves from accomplishing the heist of the century.

Is there some kind of clause in Toby Kebbell’s contrast that prevents him from being in a good movie that doesn’t contain monkeys? That’s not really relevant to the review but I wanted to say it anyway. I also wanted to fill up space because I ask what, in this or any reality, is going to surprise you in a review of a movie called ‘The Hurricane Heist’. Is it even worth me giving you my opinion on this movie? You knew what this was going to be from the title alone, and if you had any inkling of hope then the choice of director, trailer and full premise should all have affirmed what you should already know.

In all fairness though there is some aspect of ‘The Hurricane Heist’ that leans into the inherent silliness of its premise and title. But I genuinely can’t tell how much of that is intentional. Even if it is, some knowing winks to the audience are not enough to save this avalanche of so-bad-it’s-good filmmaking. It feels like a straight to video movie attempting to capitalise on the success of a recent blockbuster. The difference is that this time it accidentally ended up in cinemas. The films various set pieces essentially amount to a bunch of sequences that feel like cheap recreations of an action scene from a much better movie. By “much better movies” I mean something like ‘Twister’, that’s the level we’re at, when I have to describe ‘Twister’ as being “much better” than something. 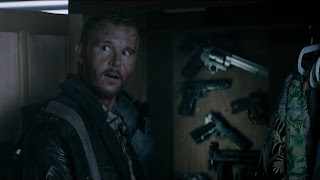 The plot is littered with so many contrivances and inconsistencies, from the opening frame to the last. Characters make decisions that are completely irrational and contradict everything the movie attempts to establish about them. They attempt to give the character a backstory to explain his traumatic history with hurricanes (because apparently we needed a reason to fear a natural disaster?) and both the concept and execution of the scene is unintentionally hilarious. At one point I honestly started to wonder if the film was incorporating elements of the supernatural into its plot, because there is no way you could be invested in the stakes of this movie and have any consideration for reality.

As I said before, one could think this is all in the name of being intentionally ludicrous. But the movie is so tonally confused that it transitions from the dumbest of reality defusing action scenes, to supposedly serious drama in which it asks the viewer to be invested in the character drama. To which I say no because the actors look about as bored and bland as the CGI effects. In both cases there is no sense of life, weight or energy to any of these elements as they appear on screen. It seems as if the films goal was to fill the screen with as many poorly composited CGI effects as possible, then cut to a reaction shot of a half asleep actor. That’s the pattern it repeats for its entire runtime.

The direction also does a woeful job at conveying any sense of space or scale. It’s odd because the one thing I can usually count on for most disaster movies are some decent wide shots of massive destruction. But in ‘The Hurricane Heist’ I honestly found it difficult to pin down where anything was at any given time. Much like the special effects, the direction keeps insisting that something is happening. It just seems very conflicted over whether or not to tell us precisely what is happening. I can’t exactly place that much blame on director Rob Cohen though since the screenplay has an inherent flaw when it comes to action scenes. Namely, visual storytelling is hindered slightly when it’s all taking place in the middle of a hurricane. You can coordinate the best gunfights and most exciting car chases, but they lose some of their impact when I’m having to squint through torrents of CGI rain to see them.

The tagline if “Make it rain”. Do you honestly need me to tell you what to think?