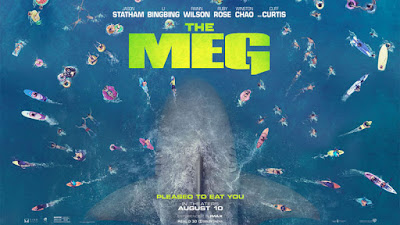 "What you discovered is bigger than anyone could possibly have imagined."

Shark movies begin and end with ‘Jaws’ as far as genuinely worthwhile pieces of filmmaking go. There really isn’t anything else that has remotely capitalised on the appeal or even seemed to understand the functionality of Spielberg’s classic thriller. Namely, they try to let the pure appeal of its concept carry the film in its entirety rather than actually developing it any further. So if you went into ‘The Meg’ enthralled by the concept of Jason Statham vs a giant shark then I can’t say you’ll be disappointed. But I also can’t say you’ll be surprised.

A massive creature attacks a deep-sea submersible, leaving it disabled and trapping the crew at the bottom of the Pacific Ocean. With time running out, rescue diver Jonas Taylor (Jason Statham) must save the crew and the ocean itself from an unimaginable threat a 75-foot-long prehistoric shark known as the Megalodon.

You may also notice that a film like ‘The Meg’ seems weirdly out of place in today’s cinematic landscape. The days of non-ironic, high concept shark movies seemed to die somewhere in the mid 2000s and was then relegated mainly to direct to DVD release with the ‘Sharknado’ franchise. Though there are a few outliers, for the most part it seemed audiences and studios had grown tired of their potential as a serious commodity, whilst alto not being committed enough to indulge in the extended joke that gave the more self-aware titles in the genre seemed to revel in.

If it sounds like I’m stalling for time rather than discussing the actual quality of ‘The Meg’ then that would simply be that beyond the mere fact that it exists at all in this day and age, the film is not overly interesting. At the end of the day, even when giving ‘The Meg’ every benefit of doubt one can give to a cheap B-picture, the film simply doesn’t allow for much rewarding viewing. That is not to say there is no appeal to it, but at the same time I personally just found the indulgent methods that B-movies use as a veil to excuse their flaws to be one that wears thin very quickly.

It’s something that film critic Amy Nicholson (she’s great, read everything she does if for some reason you are not already) referred to as “deliberate cultifacation”. The movie has the kitsch value and budgetary restrictions of many films that have gone on to be embraced as cult films, as well as the ridiculously high concept premise. But ultimately it seems to lack any sense of vision or artistic merit to it. Movies like ‘The Meg’ feel as if they are an extended in-joke which is fine up until the point when you feel like asking for more than empty cynicism. The comedic elements of the movie feel less like deliberate additions and more like a means to wave off any criticism and defend itself by limiting itself to just a cheap b-movie. But then you need only look at films such as ‘Evil Dead 2’, ‘Death Proof’ or any of John Carpenter’s early work to know that there can be great levels of artistry within this style of cinema. 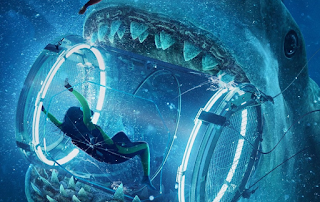 But as I said, it’s far easier for me to talk about the broader place a film like ‘The Meg’ has within the cinematic landscape because there is not much within the actual film to discuss. There’s a lot of disappointment in how the film restricts itself to a PG-13 rating and therefore skips on the gory catharsis its tone seems to suggest. This isn’t my own blood lust as much as it seems the movie making tonal promises that it then fails to deliver. Even with huge quantities of gore I don’t think the action of ‘The Meg’ could be saved due to how the film’s editing fails to convey any consistent sense of motion. It seems like the main goal of each edit was to mask the film’s inadequacies which are plentiful to say the least.

Ultimately I think ‘The Meg’ fails to make any discernible splash due to its own tonal dissonance. It refuses to commit to any one train of thought. On the one hand it demands the audience takes the film seriously enough to be invested in the action and plot on some deep level. But at the same time it also wants to keep the audience at an arm’s length so it can excuse its various errors and inherent ridiculousness. Though it’s not impossible for a film to achieve both, it’s not achieved by switching back and forth between these two goals from scene to scene. There is no specific vision for what the film wants to elicit from its audience, and instead just seems to hope that either one method or the other will land.

Refusing to commit to either of its conflicting tones, ‘The Meg’ is neither competent enough to be goof and not inept enough to be fun.