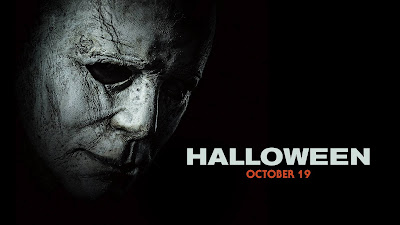 "I have prayed every day for 40 years that he would escape, so that I can kill him."

David Gordon Green has potentially one of the most varied and bizarre filmographies of any esteemed filmmaker working today. Having founded his career with intimate dramas such as ‘George Washington’ and ‘All the Real Girls’, he then underwent a shift as he directed a series of stoner comedies. These the included the well received ‘Pinaeapple Express’ and the critically maligned ‘Your Highness’. Then he switched once more to sombre and emotionally powerful dramas in the form of ‘Joe’ and ‘Stronger’. Now he has been given the reigns of arguably the most iconic horror franchise of all time.

40 years after he first wreaked havoc on an unsuspecting suburban neighbourhood, Michael Myers returns to seek revenge against the one who escaped his wrath, Laurie Strode (Jaimie Lee Curtis). However Laurie herself has also changed in these 40 years, having become a paranoid loner who has long been preparing for the nightmare to return, so she can exact her own revenge.

Despite the baggage of a dozen sequels/iterations, each with diminishing returns, to John Carpenter’s 1978 horror masterwork I was surprisingly excited to see David Gordon Green bring Michael Myers back onto the big screen. Divorcing itself from a majority of the franchise provided the filmmakers with a clean slate to execute their own artistic vision for the property and how best to finally deliver a worthy sequel more than 40 years after the original. By all purposes it should be exceptional, which is why it’s so crushing for me to concede that is somewhat unremarkable.

Perhaps the most value that can come from David Gordon Green’s ‘Halloween’ is that it gives you an appreciation for the nuance and patience of the 1978 classic. The stripped down plot mechanics which allowed Carpenter to home and perfect his craft of fear inducing suspense and an unparalleled sense of atmosphere are just some of the things that feel sorely absent from this attempt to continue the story. Despite several intriguing concepts 2018’s ‘Halloween’ comes across as a film throwing everything it has at the wall to see what sticks, rushing through one contrived narrative thread after another which all seem shockingly disconnected.

It becomes apparent in the final frame of the film that there’s really no greater thematic meaning to take away from Gordon Green’s ‘Halloween’. There are shreds of thematic undercurrents but none of them really carry over from one act into the other. What starts out as a commentary on the sensationalism of real crime and a study of generational trauma quickly descends into a by the numbers slasher which does not seek to resolve any of the ideas contemplated in act one. Furthermore because the script is so disjointed it doesn’t even allow the film to work as a stripped down work of pure horror.

Even when ‘Halloween’ does show signs of craft and intrigue it’s interrupted by the scripts own obligations to service the various meandering subplots it introduces. So while the conceptual points Gordon Green brings to the table are interesting in their own right, they seem to be constantly at odds with one another in the broader strokes of the story. As I said before some unified sense of craft or atmosphere might have helped to bring these ideas together but ‘Halloween’ is also severely lacking in that area. 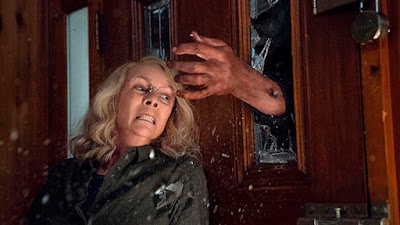 That being said, more so than the muddled script is the absence of tonal consistency. Once again I find myself appreciating the tightly constructed atmosphere of Carpenter’s original even more as the 2018 iteration seems confused in almost every aspect of its tone. Just from a craft standpoint the movie is torn between embracing the nuanced lens of the 1978 version but also exercising an overtly gory and excessive tone to the murders themselves. It will introduce the future victims under a sympathetic guise but will revel in their violent deaths and frames Michael as a victim in his own right but also uphold the notion that he’s an omnipotent killing machine beyond empathy of any kind.

Like many sequels of its nature, 2018’s ‘Halloween’ contains numerous homages to its predecessors and in doing so I think exemplifies the mistakes of the film as a whole. Whereas other continuations of a franchise like ‘Creed’ or ‘The Force Awakens’ play their homages with a sense of thematic catharsis as well as aesthetic appeal, ‘Halloween’ tries to subvert the ways it imitates the 1978 film and often tries to play these homages for laughs. That in itself is not an issue but in the context of a film that wants to create a sustained atmosphere or continuous tension.

All of these problems to a disservice to the many strong elements of ‘Halloween’. Jaimie Lee Curtis in particular gives a highly compelling performance as a Laurie who has been both defined and haunted by the events of 1978 to this day. The set pieces are appropriately suspenseful in their own context and with John Carpenter returning to compose the film’s score it goes without saying that the music of 2018’s ‘Halloween’ is truly exceptional. But none of these elements save what is an otherwise confused and misguided entry in the franchise.

Muddled on a narrative, thematic and tonal level, David Gordon Green’s reach seems to escape himself as ‘Halloween’ becomes a disappointing misfire.