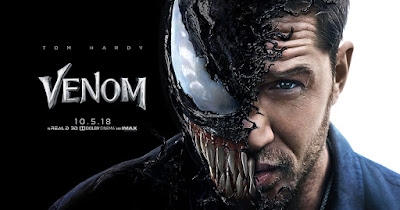 An aspect of an environment that is as saturated as the current superhero genre within cinema right now is that it can lead to more unconventional projects being greenlit. Sony and producer Avi Arad have been so eager to bring the character of Venom to the big screen that they interfered with Sam Raimi’s plans for ‘Spider-Man 3’ to shoehorn the character into a movie in which he did not belong. Ten years later though they are confident enough in the label to present it to audiences. However, that is both a blessing and a curse.

Journalist Eddie Brock (Tom Hardy) is trying to take down Carlton Drake (Riz Ahmed), the notorious founder of the Life Foundation that has recently required a mysterious substance from a probe returning to earth. While investigating one of Drake's experiments, Eddie's body merges with the alien Venom leaving him with superhuman strength and power. Twisted, dark and fuelled by rage, Venom tries to control the new and dangerous abilities that Eddie finds so intoxicating.

It’s easy to look at a movie like ‘Venom’ and be fundamentally confused over what precisely the filmmakers wanted to achieve. I understand that the answer may be obvious in the broader sense as Sony want to establish a strong foundation for their own superhero cinematic universe assembled of the Marvel characters they retain the rights to use. But I mean for the tone, style and thematic undercurrent of this singular vision that is ‘Venom’, what was the intended goal? Because I’m genuinely confused as to what it actually was.

To say that ‘Venom’ features some tonal and cognitive dissonance would be an understatement. The film’s entire aesthetic seems committed to a grittier and grounded story but the narrative repeatedly dives into some incredibly outlandish and frankly bizarre sequences. Perhaps that is exemplified best by how ‘Venom’ tries to characterise its protagonist. It introduces Eddie Brock as a morally nuanced figure but then never utilises that trait and instead delves into overblown action scenes and Tom Hardy’s awkward pontificating as the film moves forward.

It’s not that either of those approaches are flawed but when mashed together it feels as if ‘Venom’ has just as big a personality split as the symbiotic relationship between Brock and Venom. That being said at least the central character has the performance of Tom Hardy to provide connective tissue, which Hardy does with all his scenery chewing glory. Hardy’s expressionistic and volatile form throughout the film is what works to keep the viewer engaged. For all of the flaws in ‘Venom’ it is at least interesting for the most part and Hardy may be the main reason as to why. His sporadic interaction with the titular Venom is also fascinating and makes for an intriguing dynamic.

However it is also a dynamic that feels like it has been cut painfully short, particularly towards the end of where the second act used to be but is now just the bridge between an extended first act and a rushed climax. Rather than develop or explore the central personality conflict that drives the narrative of ‘Venom’, the film has one half of that duo undergo a personality shift with little to no explanation. Just as the dynamic between Brock and Venom starts to appear interesting the film throws itself headlong into what feels like an obligatory showdown with a somewhat contrived antagonist. 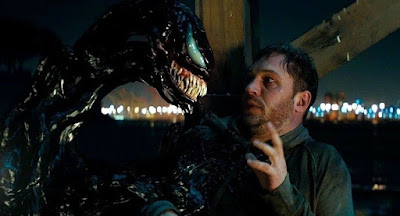 That first act which I mentioned earlier, drags ‘Venom’ down for a number of reasons. As I said it feels incredibly bloated in how it stalls several times to establish the movie’s central premise. One particularly annoying trait is how it devotes singular scenes that spoil the pacing early on, and never really justify the emotional payoff later in the film. Making us watch Brock run into side characters that will only ever make one more brief appearance simply is not worth the time it takes to establish their relationship. It's also overloaded with exposition that is almost entirely delivered through dialogue, which exists on its most basic functional level.

None of these structural issues complement the tone, nor does Ruben Fliescher’s direction which seems just as aesthetically confused as the screenplay. There are numerous scenes which seem too awkwardly staged to work as a compelling drama but also played too seriously for me to buy into the comedic routine. In other words there are plenty of times throughout ‘Venom’ which I found myself laughing, but many of them left me unsure as to whether that was the intended response. It wants to find a middle ground between the dark psychological implications of having your own mind and body infected with the comedic fallout that such a shift in personality would produce, but instead ‘Venom’ treads unevenly between the two.

This clash of tones is only made more confusing when the action scenes start to take hold of the film’s narrative. Though they contain a certain energetic pulse to them and feature an occasionally inventive action beat, they also feel muddled and messy. Fleischer keeps the action chaotic but neglects to shed any clarity, and the result are set pieces that possess no sense of geography to them. Too much of ‘Venom’ is spent trying to make out an all-black figure in dimly lit environments fighting with an array of CGI meshes. Much like the film it’s a confusing mess.

Despite some intriguing elements and a committed performance from Hardy, ‘Venom’ is too tonally confused and structurally compromised to work as a compelling entry in this genre.