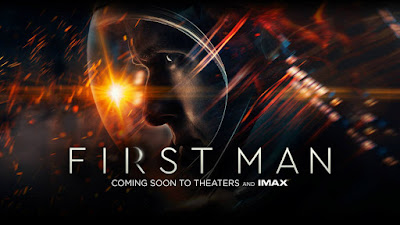 "Down here you look up and don't think about it too much, but space exploration changes your perception."

Given the subject matter of his previous two masterworks, ‘Whiplash’ and ‘La La Land’, it is surprising to a certain degree that Damien Chazelle would tackle the subject of the Apollo 11 Moon Landing as his next feature. Going from intimately staged, musically driven dramas to a story that is quite literally beyond the scope of earth is a significant transition. However it was inevitable that Chazelle would turn his sights to new forms of storytelling and new subjects from which to craft said stories. That being said a spontaneous jazz drum solo on the moon wouldn’t surprise me.

Following the death of his young daughter, test pilot Neil Armstrong (Ryan Gosling) applies for NASA’s astronaut programme and is accepted as part of the group. What follows is a mission to venture further beyond earth than any human being had before, a goal of sending a man to the moon that is littered with danger and the potential for disaster every step of the way.

Despite what I said earlier, to say that there is a big shift in the type of film ‘First Man’ is compared to something like ‘Whiplash’ is a simplification. Certainly the scale and subject is wildly different, but at the heart of each film is a deeply human and endlessly empathetic conflict of emotions that serves as substance for the broader story. On the surface ‘First Man’ is a biopic about the first person to walk on the moon. However at its core, it is a story of grief and the mechanisms one specific man uses to cope with it.

‘First Man’ paints a portrait of Neil Armstrong that is not sleek heroism but rather awkward and difficult. It renders Armstrong as a man fresh from the loss of his daughter and pushing himself into new ventures as a means to distract himself from the crushing grief, which is what eventually leads him to the moon. It’s also keen to point out Armstrong’s tendency to suppress his emotions, keeping calm and collected in the face of danger whilst only letting his inner self spill out during moments of privacy. In that sense the film is also about a man who fought to keep his emotions in check whilst at the forefront of the greatest spectacle any human could ever witness. Something that the script is keen to make note of.

Ryan Gosling brings a lot of this to the forefront of his performance. As an actor Gosling seems to specialise in portraying people who are stoic and emotionless, which in turn speaks volumes about their inner state without uttering a word. It’s a difficult performance to display with nuance but that is exactly what Gosling does. Claire Foy is a fantastic counterpoint to that as Armstrong’s wife Janet. Their conflict of emotional output comes to ahead in a fantastic scene in which Neil and Janet each confront to real possibility that they may be seeing each other for the last time.

‘First Man’ certainly possesses a more conventional narrative structure as biopics go, playing out chronologically and covering a specific span of time as it does so. But that ultimately leans in the movie’s favour as it makes the eventual accomplishment feel all the more fulfilling. The film is paced in such a way that lets us see every setback and every loss, questioning whether the feat of reaching the moon could even be worth the cost. The longer the film thrusts forward the more you appreciate the monumental task of its subject. 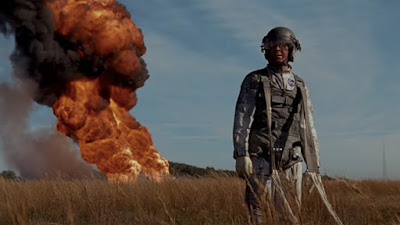 Nothing within ‘First Man’ is drawn simplistically. From the characterisation of its protagonist to how it portrays the space programme itself. Chazelle’s direction consistently emphasises the sheer visceral impact of what NASA and its astronauts were attempting. The spaceships rattle and shake violently as they fly, components have a fragile dexterity to them, and anything can go wrong at any time. There have been many movies about space travel, but none have conveyed the instinctive terror and utter danger of the enterprise quite as effectively as Chazelle does here.

It’s a testament to the precision of the filmmaking at hand that it can place the audience in such a state of tension that a viewer could briefly forget the concrete and universally known fact that NASA and Armstrong successfully landed on the moon. Even with that information in your head you will still be inclined to tense up when aspects of the mission go awry and events start spiralling out of control. Chazelle’s framing during the flight sequences evoke such a sense of claustrophobic chaos. Then there are aspects such as the sound design which conveys every worrying alarm, the cinematography that stresses every turn in motion, and the visual effects which blend seamlessly into the grounded human drama unfolding before our eyes.

For all its technical excellence though, there is real emotional substance to ‘First Man’ which makes this rendering of Armstrong’s journey so compelling. Part of that is down to Justin Hurwitz’s truly phenomenal musical score, which comes at emotional peaks in the film to elevate impeccable scenes even further (shocker, the guy who directed ‘Whiplash’ and ‘La La Land’ is good at using music in his film). Perhaps the best microcosm of this balance between momentary technical prowess and emotional storytelling is the pivotal moment of the entire film. The scene in which Armstrong and Aldrin land on the moon is masterfully thrilling in its execution. But then the moon walk that follows is one of the most quietly and transcendentally emotional scenes to emerge from cinema this year.

Thrilling and visceral in a way that no film about space has been before, as well as emotionally rich and compellingly drawn, ‘First Man’ is a triumph.