"A war is coming to the surface, and I am bringing the wrath of the seven seas with me."

I have long gone past the point of simply disliking the DCEU and am instead intensely fascinated by it as a franchise. In 2017 what many would have assumed would be an assured success on the form of ‘Justice League’ failed to leave an impression on critics or audiences, both of which were much more endowed with far less secure property that was ‘Wonder Woman. Since then they seem to have made a concerted to rely less on contrived franchise branding and more on simply crafting intriguing standalone stories.

Arthur Curry (Jason Mamoa), half human and half Atlantean, is the heir to the throne of a legendary technologically advanced civilisation living deep beneath the ocean. When a conflict within Atlantis becomes desperate, a warrior by the name of Mera (Amber Herd) journeys to the surface to ask Arthur for help. Together they must overcome a tyrannical rule that poses a threat not just to the underwater kingdom, but the entire world.

Without even speaking to the quality of the film itself, purely on a visual level James Wan’s ‘Aquaman’ immediately establishes itself as one of the most outstanding films within the superhero genre. There is something about Wan’s vibrant and energetic tableaus, mixed with the intricate and detailed composition within every frame that one would expect from a seasoned horror director, which bestows a fascinating element to his work of this scale. The same effect can be found in his contributions to the ‘Fast and Furious’ franchise, a quality which you may not palpably recognise whilst it’s there but will absolutely notice its absent when gone, as proven by ‘The Fate of the Furious’ which Wan did not direct.

If I was judging this film on pure visual spectacle then this would be a much more uplifting experience. If anything I’m actually disheartened to say that despite being stunning to behold on a visual level, ‘Aquaman’ is decidedly less capable on a narrative front. That is not for a lack of effort though, as the film suffers from an overabundance of ideas rather than a lack of them. The script bombards the viewer with plot elements, action sequences, thematic arcs, revelations and character moments that it ultimately sinks under its own weight.

Despite a confident introduction which efficiently and evocatively sets up Aquaman’s backstory and the ensuing identity struggle that comes with it, the movie rapidly loses sight of its own focal points as the narrative ploughs forward. As we are introduced to the dazzling world of Atlantis the script hurls one chunk of exposition at the audience after another to a point where it becomes almost exhausting. It’s not merely a case of the movie relying too heavily on one form of exposition, but rather there is simply too much plotting for the film to navigate. The story isn’t broken down into any simple three act structure as much as there is simply the introduction, and then everything afterwards. 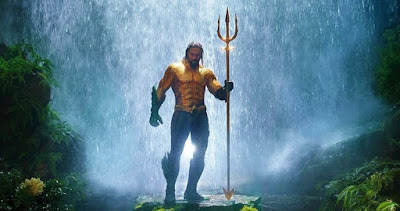 The problem with this method of delivering the plot is that rather than the story unfolding with a sense of escalation that evolves into a more urgent flow of events, the movie simply drops the viewer in at the deep end. But once again I can’t accuse the film of not being invested within its own lore and themes, but it seems as if it rarely stops to allow the audience to be as well. However if you are less likely to be endowed with the plot mechanics there are several emotively strong thematic threads to latch onto that work as compelling hooks for certain portions of the movie. Even if they are lost amid the plot they work as intriguing character motivations.

In essence the characters themselves are the most confident aspect of ‘Aquaman’. Both the titular character himself and Mera are bestowed with strong characterisations that inform their actions for the rest of the film, and serve as far more than mere vehicles for the plot. Though several elements of ‘Aquaman’ become muddled and incoherent, these two are certainly not one of them. This also speaks to the strength of Mamoa and Herd’s performances, which are immensely commanding in terms of how they convey their charisma throughout each scene as well as nuanced enough to leave room for emotional development.

As dazzling as James Wan’s action sequences are, they too eventually become overcrowded in the plethora of concepts and jargon on display. His work on ‘Furious 7’ often relied on following a single focal point (a car) in a linear direction. However with ‘Aquaman’ there are simply too many moving parts within each shot and sequence to keep track of everything, and the result are scenes which seem devoid of momentary tension or weight. The more the movie bombards the audience with one action sequence after another, the more it harms the broader narrative as even the larger stakes of the story become confused and unfocussed.

‘Aquaman’ is overflowing with ambition, which is both its greatest asset and biggest weakness.