Coming of age movies appear to be an obvious choice when making a directorial debut. Recently we have seen the likes of Greta Gerwig and Jonah Hill making the transition from performing to directing in the form of a semi-autobiographical coming of age story. Now one can also add Bo Burnham to that list as he delivers his own story of teenage disenfranchisement, ‘Eighth Grade’. Despite his protagonist being female, which on its own brings some interesting and insightful creative choices, Burnham has clearly put his own story on the big screen here as well.

Thirteen-year-old Kayla (Elsie Fisher) endures the tidal wave of contemporary suburban adolescence. She remains quiet and disconnected with her peers in school whilst regularly expressing herself through her YouTube channel. Now she must make way through the last week of middle school the end of what has until this point been disastrous eighth-grade year for her.

Perhaps the assumption that Burnham sought inspiration from his own life to make ‘Eighth Grade’ is a surface level and convenient comparison. To assume that just because Kayla has a YouTube channel and to immediately connect it with Burnham’s own career beginnings is possibly a knee jerk reaction. However I think the assumption is rooted within a deeper look at the film, simply because Burnham portrays introverts and anxiety so acutely that I have to at least ponder that he could relate to the intense personal awkwardness felt by Kayla in some shape or form.

Much like the causes of anxiety and awkwardness, I find myself being unable to pinpoint exactly what creates such a visceral feeling of that very emotion throughout ‘Eighth Grade’. Maybe it’s his tendency to frame Kayla as she is seen by others, or to frame others in the manner in which she sees them, immersing us within her point of view. The way Burnham stages his scenes also works wonders to create a palpable atmosphere in which we are conscious of every characters movements and gestures. Before long we too are sucked into Kayla’s fears of being judged by all those around her.

But I would be lying if I said a major contributor to this was not the performance from Elsie Fisher, which is utterly remarkable. The contrast between and equal conviction with which Fisher portrays the introverted girl in middle school to the one that offers life advice via her YouTube channel is staggering and in itself conveys a central theme of the film. There are no broad gestures in Fisher’s performance. Instead a well-defined character laced with nuanced and subtleties that feel so brilliantly constructed to contribute to her character but also completely naturalistic in how Fisher delivers them. 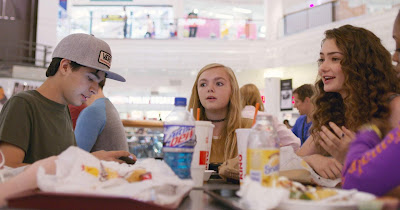 ‘Eighth Grade’ truly is a study of Kayla that in turn makes a statement about adolescence in the modern world. None of these statements feel preachy or overly sentimental though. Instead they are communicated via background details and small hints in conversations that paint an acute portrait of the environment kids now have to grow up in. Burnham avoids giving any easy answers to his audience. Just as one could point to the films portrayal of social media and the damaging impression it can leave on an individual’s self-confidence, it’s also used as a means of communication that can enable people to pursue friendships.

This modernity also bestows the film with a unique feel compared to other coming of age films. Rather than navigate the conventional school cliques Kayla has to move through a warzone of social media. It gives her interactions a level of ambiguity and uncertainty. Whether it’s body image, self-esteem, friendships or romantic pursuits, ‘Eighth Grade’ is keenly aware of the ways in which social media has forever changed the way we see each other and ourselves. However that is never the forefront of the movie, which is always focussed on Kayla as a character, instead allowing the statements on technology to fester in the background.

I was interested to see that many have labelled ‘Eighth Grade’ as a comedy. Now, I wouldn’t the fact that there are several comedic moments throughout the film. But I would also say that certain scenes in the film evoked visceral level of discomfort I’ve experienced in a long time. It’s not just mere cringe humour, but a deep feeling of awkwardness from being attached to a character and fearing for their own position. It’s in these moments (which I will not spoil) that the film offers an insight into gender dynamics and sexual education that transcend most coming of age fables. Many films can capture certain moods of adolescence, but few can use those to speak towards what we may be facing later in life and have to grapple with right now. I wish the film had discussed this in more detail but to even attempt such a feat is worthy of high praise.

A tightly constructed and intimately drawn portrait of introverted youth that is as evocative as it is insightful, ‘Eighth Grade’ is a fantastic debut for both its director and lead actor.