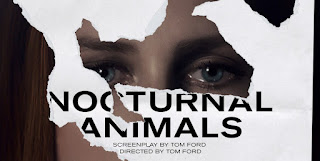 "Do you ever feel like your life is turning into something you never intended?"

So a weird thing happened to me when I mentioned this film to a friend in a recent conversation. When I mentioned that the name of its director was Tom Ford she said “The same as the fashion designer”. It was only after Googling his name that I realised they are the same person, and that Ford is actually more famous for his work in the fashion than in film. Firstly this answers my question of why he has taken seven years to make another movie after his brilliant debut ‘A Single Man’ and confirms that he should probably be just as highly regarded for his directing as his designing.


An art gallery owner Susan Morrow (Amy Adams) is haunted by the new novel from her ex-husband Edward (Jake Gyllenhaal), a violent thriller that tells a tale of justice and vengeance in the Texas desert, she interprets as a veiled threat and a symbolic form of revenge.


From the very first frame of the ‘Nocturnal Animals’, it would seem that Tom Ford delights in unnerving his audiences. But then again Ford’s obsessive attention to detail, impeccable shot composition and strikingly complex storytelling process lead to believe that he takes delight in making his audience experience something that can be called pure art. Almost every aspect of this film feels designed with an exact intent, as if every subtle glance and tiny object has been placed to provide a deeper insight into this dark and twisted world.


It is for this reason that some will deem the film cold and clinical, which is a sentiment I can understand. However I found that if there was a coldness to the film it was only due to the character it was portraying, one that did not evoke sympathy, but empathy. The beating heart of ‘Nocturnal Animals’ is a visceral, awe inspiring one that weaves themes of grief, guilt, fear, revenge and loss. Like the themes the story handled multiple aspects, with each layer bleeding into one another, contrasting each other as often as they complement one another. The sleek stylings of Los Angeles seem especially out of place when placed against the rustic Texan landscape, but the brutality of both worlds seems particularly harsh alongside the warmth on display in flashbacks to Edward and Susan’s earlier days.


One would think that all of these contrasting elements would come ultimately result in a product that has the feel of multiple movies welded together. But as stated earlier, Ford’s ability to merge each conflicting layer makes the film absolutely invigorating. Each aspect feels like a carefully placed piece of a much larger puzzle that is both versatile and rigidly taught. The film shifts genres throughout its runtime but maintains a constant undercurrent of tension and suspense despite the fact that it is a thriller one moment, a pulpy neo-western at another and an elusive noir at as well. Then again some of the scenes in the film are so viscerally evocative that they feel more at place with a horror film than a movie about the lives of the rich in L.A.

But what is even more remarkable is just how tightly paced the whole film feels. Rather than sagging under the weight of its multiple themes and stories Ford’s movie ramps up the pace and rarely stops to let the viewer breathe. There’s a Hitchcockian kind of relentlessness to it, but that breakneck pace is supporting a story full of Lynchian traits from its dark subject matter to its warped view of reality. In fact comparisons to films like ‘Blue Velvet’ are probably justified due to how there are multiple moments that come across as pure nightmare fuel, designed unsettle and challenge anyone watching the events as they unfold. It’s little wonder why Amy Adams’ character never gets any sleep if she has to live in a world like this.


Though it would seem that Adams is reduced to the role of onlooker amongst the films wider stories she is still given plenty to do, and Ford’s direction supplies her with the best possible outlet to do so. From the start there is an inner sadness that permeates the character and the way Ford intensely focusses on her allows the viewer to see every subtle mannerism of her performance that conveys it. Adams employs some remarkably expressive techniques to unnerve the audience with her reactions, but at the same time she also knows exactly when an even more unsettling reaction would be that of restraint. The rest of the cast are just as mesmerising if not better, with Michael Shannon’s utterly terrifying role being told with such conviction that he comes across as an unstoppable monster, while Aaron Taylor Johnson is unrecognizable in his role. Jake Gyllenhaal has the challenge of playing two different characters (Edward and his literary counterpart Tony, envisioned by Susan as she reads the novel) but he carves such distinct personalities for each of them yet retain an eerie similarity that one can clearly see the Susan’s association of the two entities.


Evocative and challenging while also being so beautifully designed and artistically rendered, ‘Nocturnal Animals’ is a masterwork of layered and complex storytelling that is sure to unsettle you from start to finish.