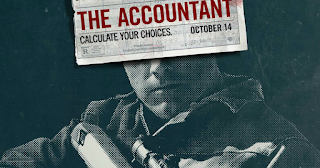 "This guy risks his life uncooking the books for some of the scariest people on the planet."

So 2016 is shaping up to be a very busy year for Ben Affleck, while the unmitigated failure of ‘Batman v Superman’ probably wasn’t the best way to launch his career as the caped crusader Affleck’s widely praised incarnation of the hero has left him in a good position. Towards the end of the year he is also finally making another directorial outing (likely to be his last before taking the helm of ‘The Batman’) with ‘Live By Night’ and now he gets a chance to shine in front of the camera with ‘The Accountant’.


On the surface Christian Wolff (Affleck) seems to be a good natured if not slightly socially secretive autistic man. However in reality he is an internationally renowned accountant who earns a living by performing superhuman levels of mathematics of the finances of criminal organisations, and due to the company he keeps Wolff also holds knowledge of weapons training, marksmanship and hand to hand combat.


I was somewhat sceptical about this movie upon going into it, not only for the actual quality of the film itself but given Hollywood’s history of oversimplifying or misrepresenting autism as a condition it might be awkward to see it applied to this film as an excuse for why a character has superpowers. However as far as that front is concerned I need not have worried. An interesting character study and delicate performance from Affleck means that the film rarely feels exploitative and is clearly making a sincere effort to avoid such an accusation. In fact the character of Christian Wolff is by a wide margin the best aspect of the film.


Wolff himself is portrayed as a fully three dimensional character and his struggles are rarely reduced to mere plot devices. Instead they come across as genuine attempts to break down a character and present a clear message to the audience concerning how we overlook and underestimate certain individuals. Not only that but ‘The Accountant’ does not great Wolff as a child-like man in a blarger world, Wolff is very clearly an adult with complex issues, rational opinions and an understanding of the world around him but just happens to process that information differently than most people do. With Affleck portraying him he becomes a humane and sympathetic character, with the performance being one of great conviction and commitment that remains consistent to characteristics established at the start of the movie and rarely puts a foot wrong in carrying those features for the entirety of the movie.

As a character study then, ‘The Accountant’ has a lot going for it, in fact I would much rather see a franchise about this man of mystery than whatever the hell the DCEU is planning. However what gets in the way of it being a truly worthwhile experience is the plot of the film. Despite the premise I gave at the start of this review the actual plot of the movie concerns Wolff tackling a non-criminal client only to uncover a huge conspiracy that turns both him and an employee he has befriended, played by Anna Kendrick, into targets for assassination.


While at a glance that would appear to be a serviceable plot and a good means to provide some narrative structure to the film, the ensuing mystery that powers said plot is that it comes to dominate so much of the film that it inevitably loses focus on its central character that it did such an excellent job of establishing. Character pieces and mysteries rarely mesh well for the sole reason that for the audience to be invested in the mystery they have to be in a position where they want to uncover information that they do not know. Meanwhile a good character study requires the audience knowing as much information about the character in order to empathise with him. When the two collide the withheld information comes across as cheap and gimmicky when it finally is revealed and the movie continually gets caught in trying to up the ante with each plot development by throwing one surprise twist at us after another.


The end result is that the movie becomes needlessly complicated as well as utterly pointless to the overall development of the film, with a sense that the twist was added purely to pad the runtime of the film. Throw in an awkwardly paced and underdeveloped sub-plot about J.K Simmons investigation into who the titular accountant is (I assume he wanted pictures of him) then the entire film feels like a collection of meandering plot turns that never reach a destination more satisfying than the superb character work that is sadly squandered.


A good character study wrapped up in a bad mystery.