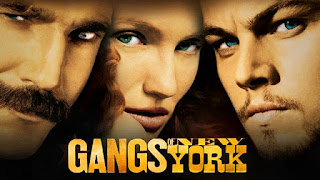 "With this knife that struck him down, let me put to rest my father's ghost."

Sometimes a films components don’t quite add up to the sum of its parts. Take the greatest American director of the latter half of the 20th century, team him up with debatably the greatest method actor to ever walk the earth and an up and coming superstar would surely produce an astonishing and transcendent result? Well when it comes to ‘Gangs of New York’ that depends on who you ask.


Following a series of violent gang wars in the newly forged New York City, crime lord and political kingmaker Bill Cuttings (Daniel Day Lewis) has enjoyed sixteen of ruling over the city following a massive is about to witness a disturbance in proceedings when a young man named Amsterdam (Leonardo DiCaprio) joins his gang, as unbeknownst to him, Amsterdam is a man looking for revenge.


One common trait with cinematic epics, or a common flaw so to say, is that while many of the greats such as ‘Seven Samurai’, ‘Once Upon a Time in America’ and ‘There Will Be Blood’, those that fall short do so due their second acts. Epics start and end on breathtakingly strong notes but when taken as a whole don’t quite live up to their potential. ‘Gangs of New York’ almost fits that description perfectly. Its visceral opening scene depicting the battle that establishes Cuttings as the leading crime figure in New York is a stunning piece of filmmaking and stands as one of most exquisitely crafted scenes in Scorsese’s filmography. Then its final shot stands as a rousing and emotionally heavy sequence that paints a hauntingly beautiful closure to a character as well as a tribute to an entire city (one that must have had even more resonance in 2002 when the city was still recovering from the events of 9/11).


However as I said before this speaks volumes about the film as a whole, because while those two examples give weight to the idea that the film starts and ends about as strongly as a movie possibly can, the story and pacing both suffer during the middle section of the film, becoming convoluted and dreary in their structure. Despite populating his film with a number of interesting and eccentric characters, all of which are played by great talents like John C Riley, Jim Broadbent and Brendan Gleeson, ‘Gangs of New York’ seems so desperate to wrap up each intersecting storyline and character arc to provide a cleaner final act that it strays from the path somewhat. Rather than using the extra time to create three dimensional portraits of these characters though, the film feels as if it’s introducing them in one scene then trying to generate closure in the next, meaning that none of them expand beyond eccentric caricatures.

That being said they are all performed by immensely capable actors, who all revel in their unique and memorable roles. All of them except Cameron Diaz that is, and while I won’t dwell on the shortcomings of one actress amid an ensemble or pretend it drags down the film as a whole, but I will say that the usually comedic actress is clearly out of her depth here. The two main players that underpin the story though, are both absolutely fantastic. DiCaprio has an elusive nature to him as well as a sense of vulnerability that places his character in a sense of danger, thereby heightening the audience’s trepidation of whether or not he will achieve his goal. He also establishes a pleasing amount of conflict as Amsterdam’s arc develops, ironically finding a father figure in the man who deprived him of his real father as he bond with Cuttings continues to develop. At the same time though he brings forth a resolve that means we are always aware of the motivation that drives both the character and the story.


But even Leo’s best efforts are almost dwarfed by those of Daniel Day Lewis. While Bill Cuttings lacks the depth and complexity of his other characters like Daniel Plainview or Abraham Lincoln, Day Lewis brings such a ferocity and unrestrained rage to the character that it is truly frightening. It is an ever present threat that even in the quitter moments hangs over the scene as a looming menace. But those quieter moments are made all the more frightening just by how they contrast to the moments of violence with that of sophistication and intelligence. He makes the warped, father/son relationship more convincing and honestly the most intriguing part of the film. In many ways I’m saddened that the film as a whole doesn’t focus on this more personal story rather than delving into its grander territory that can’t quite fulfil its potential.


That being said, despite the shortcomings in the script Scorsese’s direction is on hand as usual to elevate the film to a higher standard. His craftsmanship is evident from the start to the end, and once again his personal attachment to the story shines through, as the film expands upon the directors continued fascination with the city he grew up in, and tells its history without condemning nor condoning the violence on hand. Scorsese knows that despite the ugliness of the bloodshed, it is one of the aspects that forged the city as it is known today. This is of course reflected in the film’s final shot as well as the labour of love that this massive project represents.


‘Gangs of New York’ is admirable for its ambition and filled with many amazing aspects that help levitate some of its structural flaws.