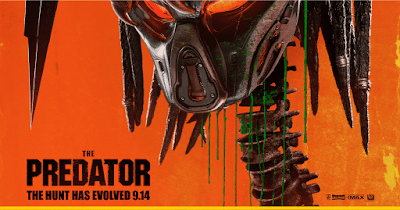 "Do you know what my job description is? I look up and I catch what falls out of the sky."


It seemed as if the idea of a new instalment of the ‘Predator’ franchise with Shane Black in the writer/director’s chair was a perfect concept. Black is one of the best at high concept action that blends the volatile and interesting psyche of unique characters with high stakes narratives that unfold with humour, tension and depth. I immediately conjured up images of something akin to ‘The Nice Guys’ or ‘Kiss Kiss, Bang Bang’ with a Predator thrown into the mix. Black even had a small role in the 1987 original to complete the circular perfection of him being put in charge.

From the outer reaches of space to the small-town streets of suburbia, the hunt comes home. The universe's most lethal hunters are stronger, smarter and deadlier than ever before, having genetically upgraded themselves with DNA from other species. When a boy accidentally triggers their return to Earth, only a ragtag crew of ex-soldiers and an evolutionary biologist can prevent the end of the human race.

So as I said, there was every reason to expect ‘The Predator’ to be the long overdue return to form for the franchise and finally bring us an instalment that could rival the Schwarzenegger action classic. However it brings me no joy to say that ‘The Predator’ is a colossal disappointment, easily Black’s weakest film as a director and verging on the incoherent at times. It amounts a mess of stylistic flourishes that, while interesting, are not allowed to evolve into anything meaningful combined with studio mandated additions in an effort to drive a more serious tone that ultimately falls flat.

If you were to describe the amount of ground covered by ‘The Predator’ you would then be surprised to hear that the film comes in at a somewhat short 95 minute runtime.  This was likely the result of 20th Century Fox looking to cut and capitalise on an increasingly bizarre movie that was very clearly not what they sought to achieve with this franchise. As they did with David Fincher’s ‘Alien 3’ and Josh Trank’s ‘Fant4stic’, Fox have disturbed a film that contains vague allusions to what its director originally wanted but then descends into a generic and faceless mess.

That being said, I worry that Black’s original vision might not have been all that compelling in the first place. Though it’s possible his full version did indeed add depth, substance and development to every thematic arc he introduces there’s such a large amount on offer in ‘The Predator’ that I can’t imagine him addressing every one of these and still having a cohesive movie. There are enough plot threads and high concept arcs to sustain an entire franchise within this script, but instead ‘The Predator’ opts to introduce them all without ever endowing them with any kind of arc or significant impact on the narrative.

The same goes for the characters, though the assembled cast are all impressive and they each have the semblance of an intriguing character arc to begin with, none of them are allowed to develop in a way that feels earned or properly paced. At best a character will get a rushed and unfulfilling resolution to their arc, at worse they are dropped altogether. The bright spots are the moments in which they are simply trading dialogue, as it lets Black showcase his trademark snappy and confrontational conversations. As well as that it’s hard not to love the gory anarchistic glee in which the film displays it’s biggest action set pieces, as well as the fitting 80s flavoured soundtrack. Outside of that however, there is much to be desired. 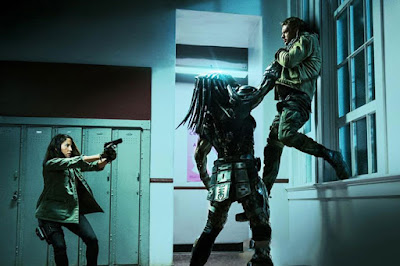 Speaking of casting I want to take a minute to at least address the controversy surrounding Black’s casting of registered sex offender Steven Wilder for a minor role. I take issue with calling it a “controversy” because that implies there is a debate to be had, when the simple fact is that Wilder should not have been cast, Black should have known better and was very much in the wrong, while Olivia Munn is most definitely not in the wrong for demanding that the scenes featuring Wilder be cut.

The fact that a controversy of that scale was more of an afterthought in addressing where ‘The Predator’ made a misstep speaks a lot. Black does at least alleviate the issues by emplying his usual tongue in cheek, self-referential style of comedy to lighten the film’s tone. But in another sense that also clashes heavily with the tonal requirements when the film then demands to be taken seriously on a narrative level. Black can’t quite reconcile the two tones as he has done on other occasions.

On a scripting level perhaps one could overlook the cognitive discconance within the narrative of ‘The Predator’ but any hope the film had ay being cohesive is torn to shreds by the editing. The cuts are sloppy and unsubtle, with no attempt to convey a sense of pace of rhythm on a momentary or scene to scene basis. Any singular moment, when taken out of context, might hold up. But when trying to place it within the greater framework of the story and action beats the result is exhausting.

‘The Predator’ is a mess of a movie. Despite some entertaining moments there are too few compelling beats in the action or story to make it anything other than a huge disappointment.