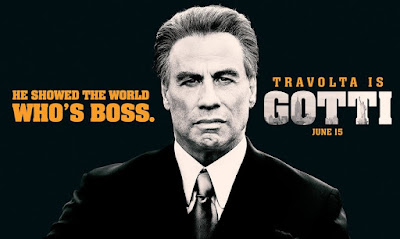 "There is no choice, only what you do."

One of the most valuable things about watching a terrible film is that it can provide a fascinating insight into the ways in which other films that are similar manage to be good. There are many films about organised crime, some of which are among the best in films in history. ‘Gotti’ (as much as I hate to use hyperbole) could well be the worst film to ever tackle the subject of organised crime. But at least you might walkway with an even bigger respect for those gangster movies that do work.

Chronicling the story of John Gotti (John Travolta), a mafia boss who reigned over the criminal scene in New York for three decades and once regarded as the most powerful and dangerous crime bosses in America. As his empire expands, Gotti has to reconcile protecting his family with keeping a firm grip on the criminal scene he presides over.

In all honesty the controversy surrounding the release of ‘Gotti’ might make for a far more interesting film than whatever haphazard product hit cinema screens earlier this year. I’m actually glad I waited to review the film so as to see the whole debacle play out. It began as the films official marketing campaign actively hitting back at the critics who penned negative reviews by encouraging audiences not to trust “trolls behind keyboards” (well, I’ve been called worse things). The marketing also took pains to point out the film’s high audience rating on Rotten Tomatoes. However said rating was suspected to have been drastically manipulated as critic and industry commentator Dan Murrell noted both the abnormally high use of “users” giving ‘Gotti’ a high rating as well as the fact that many of these accounts had given scores only for ‘Gotti’ and nothing else.

This is all without mentioning the fact that the studio in question is MoviePass Ventures which is a whole other car crash situation in of itself. I advise anyone who is unaware to Google the company’s name and bask in the unfolding saga, since I simply don’t have the space to address it here. It’s a story almost as bizarre as the way in which ‘Gotti’ is presented. What we have here is a film that manages to engage in every tired cliché and trope about gangsters, right up to and then way beyond the point of parody, but somehow executes each one in a manner that circumnavigates their function.

Here’s an example. ‘Gotti’ starts, as many gangster movies do, with narration from its title character. Normally this storytelling device works to frame the story and provide a sense of structure from which the narrative can evolve whilst retaining its focus and point of perspective. But that is not what happens here. There is no consistent point of view or perspective as the movie drags on. It seemingly jumps through eras of its subjects life at random, gets lost inside facets within facets of story beats, somehow seems to get confused with its own focal point as it muddles its way towards the conclusion. ‘Gotti’ may truly be one of the most confusing movies you will ever watch. 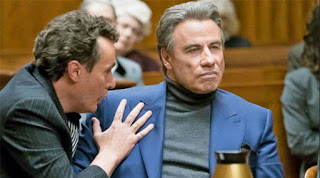 In fairness I think the issue of focus might not be an inherent problem with the script as much as it is an issue in the execution. In films like ‘Goodfellas’, the movie creates a sense of atmosphere and environment through music. It’s not an exact science but by playing Tony Bennet at one point in the movie and slowly transitioning in style and era to the likes of Eric Clapton, the audience intuitively understands that some years have passed. ‘Gotti’ has a soundtrack but much it is from the musical infamy of Pitbull. Scenes set within the 1960s through to the 1980s are all accompanied by the sounds of Pitbull songs, which makes the general time and era somewhat hard to pinpoint.

It also doesn’t help that much of the scenes in ‘Gotti’ are set within drab, flat interiors that do little to evoke any sense of location. So many of the scenes play out in the exact same manner with the same formulaic method of staging. Gangster sitting around a table pontificating about manhood, loosely skipping over details that might make Gotti’s ascendancy and characterisation feel more fleshed out. Every character is presented as an over the top caricature, with dialogue to match. So when the film then tries to deliver any kind of payoff in its third act wherein it thinks the audience sees these mobsters as dimensional people is utterly laughable.

There are so many aspects of ‘Gotti’ that feel like a sketch comedy scene that mysteriously warped into its own deranged entity. From the minimal set design, to the over handed dialogue and even Travolta’s central performance. Travolta remains highly expressionistic throughout the film, whilst also trying to contain it within a character the script and narrative continually frames as a quiet outsider and the two motifs do not mesh at all. If anything part of me wonders of Travolta was the only person who understood the tone ‘Gotti’ should have aimed for, pure comedic value.

‘Gotti’ is a haphazardly assembled mess of a movie that feels like a parody of a mob movie that someone mistakenly tried to play with a straight face.