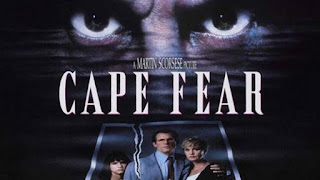 Remakes have garnered such a bad reputation of late that it may be easy to look back on this 1991 remake of the 1962 psychological thriller, ‘Cape Fear’. But with a director of Scorsese’s calibre is it unfair to diminish this effort? After all it was another remake that would eventually earn the director his long overdue Academy Award for Best Picture/Best Director. But of course that can also be its downfall, because not only does this thriller have to compete with the original movie, it has to be released under the name of a man who just a year before this, released ‘GoodFellas’.


The story of a convicted rapist named Max Cady (Robert De Niro) who, using his knowledge of the law and its numerous loopholes, seeks vengeance against a former public defender Sam Bowden (Nick Nolte) whom he blames for his 14-year imprisonment due to purposefully faulty defence tactics used during his trial.


The first major problem I encountered when re-watching ‘Cape Fear’ was being consistently reminded of that episode of ‘The Simpsons’ (titled ‘Cape Feare’) as it parodies the movie’s storyline. Every time I try to become immersed in De Niro’s threats I’m reminded of Sideshow Bob being hit by a rake. But putting that aside ‘Cape Fear’ is a competently made thriller that gives itself a reason to exist by expanding on various ideas juggled by the original, and by the fact that Scorsese is able to inject the story with his own directorial sensibilities that separate it from any average movie of this genre. It lacks the brutality of other Scorsese efforts but that is somewhat understandable as ‘cape Fear’ is clearly intentioned to be a more accessible thriller than other entries in the director’s filmography.


That sense of grit and brutality is actually one of the reasons why this remake distinguishes itself from the original. With the 1962 version hamstrung by the stricter censorship rules regarding the more explicit of the movie. Scorsese takes full advantage of the more lenient rating systems of 1991 and makes a grittier movie in its tone and content as well as creating edgier characterisations of the people within it.


However those edgier characterisations could also be one of the films pitfalls, particularly when you are trying to establish an emotional connection with Sam Bowden, who comes across as so unlikable that it felt extremely difficult to sympathise with him. That is not to say I sided with the former rapist, now stalker played by De Niro, but in a film whose moral sensibilities are drawn as black and white, with little ambiguity between them, the lack of an empathetic protagonist is sorely felt. It’s not as if Scorsese hasn’t made unlikable people sympathetic before, either through their complexity with Jake La Motta in ‘Raging Bull’, the subtlety of Travis Bickle from ‘Taxi Driver’ or the well-structured development of Henry Hill from ‘GoodFellas’. But here that emotional connection seems to be distinctly lacking.

The result is that the film as a whole feels impersonal, where despite his trademark style being on display Scorsese’s usual narrative themes of guilt and redemption feel underdeveloped. There’s plenty of symbolism on display to carry some of these deeper themes from Max Cady’s various biblical tattoos to the cathartic washing of blood from someone’s hands, but little of this seems to carry over to an emotional level.


However Scorsese is still able to take this premise and explore some interesting themes with it. He focusses more on the psychological torment one man inflicts upon another as Cady torments him and attempts to prove that they are both criminals. The two actors are able to carry this in their performances and like every other element of the film, distinguish themselves from the original. Whereas Robert Mitchum’s performance was eerily unnerving (and not nearly as terrifying as his performance in the undisputed masterpiece ‘The Night of the Hunter’) De Niro’s portrayal is outright evil and psychotically obsessive. He feels more temperamental and unstable, which in itself serves to make the character feel more unpredictable and as a result he becomes more frightening. Despite my reservations of his character, Nolte’s performance is a convincing one and for the sake of fairness one could label his more fractured portrayal as an attempt to separate his portrayal from Gregory Peck’s more humble and sympathetic incarnation in 1962.


Scorsese’s direction makes good use of these actors and the supporting cast around them. He draws tension from scenes in a deeply impressive way, keeping his camera focussed on the obsessions of his two main characters. There are some techniques that are more reminiscent of hardboiled noirs but others that remain distinctly within Scorsese’s style. He displays here that he is clearly a director at the top of his game and wasn’t showing any signs of slowing down soon.


A well-constructed yet somewhat impersonal thriller, that doesn’t feel like an advance from Scorsese but at the same time is not something I’d label as a misstep.