"Every man's got the right to choose the way he dies."

It seems that with the slew of remakes we have experienced in recent years people have been relatively indifferent towards a remake of 'The Magnificent Seven’. Instead of the usual cries over how Hollywood could tarnish another classic or asking whether anything is sacred anymore people seem more curious and interested in this reimagining. Mainly because the original is itself a remake of Akira Kurosawa’s action masterpiece ‘Seven Samurai’ and despite its legacy ‘The Magnificent Seven’ leaves room for potential improvement, it just depends on whether they can find it.


Like the 1960 film of the same name, ‘The Magnificent Seven’ relies heavily on the charisma and chemistry of its cast to elevate a fairly standard plot. That is not necessarily a criticism as that simplistic plot is intrinsically linked with anything attempting to reimagine ‘Seven Samurai’ as Kurosawa practically invented a dozen action tropes that are still being used to this day. In fact that simplicity can act as more of a strength due to the breathing room it gives a filmmaker to deepen and expand the characters within that story. Sadly that isn’t quite the case here.


If there is one thing that is evident throughout ‘The Magnificent Seven’ it is that Antoine Fuqua has a deep passion and love for the western genre. You can tell this not only in the way his movie indulges in the usual trappings of a western (there is literally a scene in which a character walks through some swinging doors into a saloon only for everyone to star at him and the piano player to stop tapping out a tune), but also in the smaller details that firmly route this film within the genre. Credit where it’s due this is not, as I feared it would be, merely an action movie wrapped in the aesthetic of a western. It is a full blooded and lovingly crafted addition to the field. 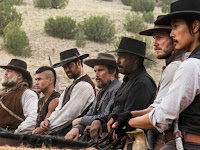 Mind you, as someone who is a big fan of the classic western, I happened to enjoy these aspects quite a lot. There was a unique pleasure to see these tropes being executed without a hint of cynicism or parody and they rarely feel cheap or forced. Not only that but numerous other aspects suit the idea of a modern western very well, particularly the action which is accompanied by long awaited standoffs to make the heart pounding moments feel earned as well. I don’t simply want to say that a modern western equates to bigger and louder but in this case that is an accurate description. There is definitely a grandiose aspect to this remake that makes it feel all the more realised and Fuqua is able to direct is very well, with no cheap gimmicks like shaky cam or quick edits, instead we get real stunts and just good filmmaking.


But going back to my earlier point about characters, because that is really where the film falls flat. While they each have decent chemistry and the cast themselves all do a good job distinguishing themselves as unique presences within the story, the way they develop comes across as either rushed or lacklustre. For example, Ethan Hawke’s character has a backstory involving PTSD from the Civil War and while it’s addressed from time to time, it inevitably disappears with little reason behind it in order to get back to the action. While the cast as a whole are enjoyable to watch the likes of Washington and Pratt feel as if their charisma isn’t being fully utilised despite being on display to a certain degree. Not only that but with the group spending essentially no time with the villagers they are supposed to be protecting there is less of a connection between the two groups and inevitably we are not as invested in their sacrifice.


But maybe this approach to establishing the central seven as presences rather than characters relates to the overall message of the film. It never seeks to look under their skin and question the invulnerability of the cowboy icon. In fact I’m going to have to dip into minor spoilers to fully convey this point about how certain differences in ‘The Magnificent Seven’ highlight what could be a big change in modern moviegoers. In both ‘Seven Samurai’ and 1960’s ‘The Magnificent Seven’ the ending stands as a sombre reminder of the warriors sacrifice and explains the notion that once they have accomplished the peace they set out to achieve, the warriors have become obsolete. Despite their victory they face an uncertain future in comparison to the farmers return to normality and their sacrifice stands as a reminder of the price they paid. The final moments are not about glamourizing the western myth, but deconstructing it. However the 2016 remake is almost the complete reversal of that. Firstly because instead of noting the end of an era and closing with the words of “We lost. We always loose” as the original did, the remake concludes that the sacrifice and bravery of the cowboys will make them legends. That is a slight deviation from the theme the original was trying to convey and its made even worse when it is revealed that Washington’s character had personal reasons for being involved with the conflict that involve revenge. Not only does the movie refuse to acknowledge any notion that the cowboys are not the victors, they parade the myth of the west more so now than the 1960 version did. Despite the common impression that modern movies are more cynical than those of yesteryear, it is the movie made sixty years ago that takes a more pessimistic and ultimately more complex view of a cultural icon. What does that say about us as an audience?