After crafting two very different, distinct yet ultimately fairly substandard films, it’s safe to say that Martin Scorsese wasn’t exactly on anyone’s radar as 1973 arrived. That proved to be a grave miscalculation as in October of that year he arrived in the scene with his first true masterpiece. ‘Mean Streets’ proved to be energetic, powerful and deeply personal.


Charlie (Harvey Keitel) is a young Italian-American man who is trying to move up in the local New York Mafia but is hampered by his feeling of responsibility towards his reckless younger friend Johnny Boy (Robert De Niro), a small-time gambler who owes money to many loan sharks. This film chronicles their efforts to navigate the dangerous world they inhabit and try to satisfy their raging ambition.


Like all of Scorsese’s great movies, ‘Mean Streets’ is so much deeper and more complex than it would suggest, transcending the limitations of its genre and becoming something much more profound. ‘Taxi Driver’ is more than just a thriller, ‘Raging Bull’ is not simply a sports movie and ‘Mean Streets’ is far from another gangster flick. It’s not about gangsters, it’s about the state of sin and the concept of guilt and the effects of growing up in a gangster environment.


These themes are shown perfectly by the films two main characters. As Charlie Keitel plays a man with a pathological guilt complex, one who continues to carry out acts of violence only to beg and pray for forgiveness. In one famous shot he holds his hand above a candle in the alter and tries to keep it their despite the obvious pain, almost as if he is trying to prepare himself for the fires of hell. But despite this he never quite forces himself to quit the business. 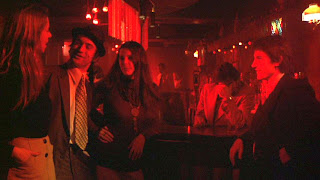 His friend Johnny Boy on the other hand is in many ways the complete opposite. Where Charlie represses his anger so it haunts him internally, Johnny releases it regularly much to the inconvenience of everyone around him, especially Charlie. He struts through life with what could be mistaken for no sense of self preservation, he shoots out street light when he’s bored, borrows money from loan sharks and picks fight with people over insults he doesn’t even understand. He is violent and uncontrollable but one has to wonder, as Scorsese subtly asks it throughout the picture, is he just a product of the world around him?


It’s difficult not to answer yes, because that world is so thoroughly fleshed out by Scorsese and brought to life with such brilliance. From the first shot there’s a sense of imminent danger, frustration, pent up anger as if the whole situation might suddenly explode. I know of no other director who can blend grittiness with style as brilliantly as Scorsese and ‘Mean Streets’ is a prime example of that. Just one example is that the real world is filmed in ordinary colours but the bars and hideouts are lit in blood red, bathed in violence, anger and danger. The varying speeds, altered angles and pitch perfect use of music give the film such a sense of vibrancy and energy.


You would think that balancing a study of an environment with two character studies would be impossible but think again. Both Johnny and Charlie are performed so perfectly by De Niro and Keitel that choosing between them is near impossible. For one the prime motive is self-loathing and for the other, self-destruction. One believes solely in his religion and cannot do anything in life without being a sinner. Charlie craves redemption yet has no idea how to obtain it, so for now all he can do is go on surviving the only way he knows how. Johnny possesses an over romanticised view of criminals and seems to think he’s in a gangster movie. When we first meet him he plants an explosive in a mailbox and watches as it blows up. Why? Boredom.


You would think that with such an emphasis on character and environment there wouldn’t be much to the action scenes. But once again you would be wrong. Scorsese utilised hand held camera for quick movement and fights, moving the viewer’s vision nimbly through the continually erupting chaos. Despite the eloquence the fights retain their sense of grit and realism. The characters do not suddenly become expertly trained fighters, they are still young punks practising whatever fight moves they saw in a movie.


‘Mean Streets’ proved to be Scorsese’s first breakout success and what made that all the more remarkable was how miniscule its budget was. The actors involved had little experience and while it should be set in New York, most of it is shot on the disguised streets of L.A. In many ways that’s why it’s so brilliant, you never feel as if you’re watching actors or stages, you’re watching real life unfold right in front of you, life with all the pain, violence and tragedy.