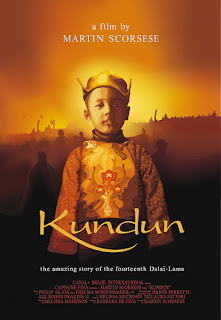 "You are the man who has come back to lead us, you must know what to do."

The movie that got Scorsese a life ban from entering China (sometimes I wonder if when he signed whatever deal with whatever god that would give him unprecedented access to actors like Robert De Niro and Leo DiCaprio the catch was that controversy had to follow him wherever he went). Due to the controversy the movie’s distributor, Disney, didn’t exactly go all out to push the picture and it went on to become one of Scorsese’s biggest financial bombs. In all honesty, that’s quite a shame.


Based on the life and writings of Tenzin Gyatso, the 14th Dalai Lama, from being selected as the next Dali Lama as a young boy in 1937, his role in the governance and spiritual leadership of his country to being forced to flee to India when Communist China declares Tibet to be part of their empire and begin an oppressive regime.


Though it sounds as if ‘Kundun’ would be a more audacious project for Scorsese to undertake, the whole feature plays out in a surprisingly leisurely manner, as if by this point in his career crafting a film of this standard has almost become a thing that requires minimal effort. I say this because while ‘Kundun’ is a flawed but impressive feature it rarely feels as if Scorsese is pushing the boundaries of his talent to make it. On both an emotional and technical level it feels as if we’ve been here before, not as blatantly as the manner in which his previous movie ‘Casino’ echoed prior efforts, but in almost every respect ‘Kundun’ simply feels like Scorsese revising the themes that have distinguished his career as such a remarkable one.


The obvious parallel may be the fact that Scorsese is once again retelling the life of a religious figure, and an important one at that. But where ‘The Last Temptation of Christ’ featured a beautifully humane portrayal of its title character, ‘Kundun’ takes more care in its depiction of the Dali Lama. Maybe that in itself is to tie in with the culture surrounding the figure, in that he is simply a vessel for a spirit, so that by providing us with a less humane portrayal of the Dali Lama it shows him as more of an icon than a man.


That’s all well and good of course, but from a narrative standpoint it does leave the film somewhat emotionally distant. If the audience cannot fully empathise with the protagonist then they have less investment within the movie as a whole. That being said Scorsese does an impeccable job of immersing his viewer within an entirely new culture and society, emphasising the spiritual nature of the land and its deep resonance with those who inhabit it. This is due in part to Scorsese’s patient, more measured directorial approach. There is less style and flair here with an eye for the detail and beauty that surrounds the characters.

The beauty of the film also lies with Roger Deakins’ stunning cinematography (of course it’s stunning, it’s Roger Deakins) that not only gives a naturally tinted aura to each scene but also gradually shapes the images into more abstract and spiritually focussed visuals as the story progresses. It gives the locations a genuine sense of weight and importance and only makes it all the more tragic when this seemingly undisturbed sanctity finds itself embroiled in the complex political turmoil that is the post-war 20th Century. Philip Glass’ electronically synthesised score also adds to the effect with its otherworldly tones.


Despite being populated by relatively unknown actors the performances are decent across the board. It’s difficult to praise or condemn anyone because there are not really any standouts to point out, with each actor clearly being less concerned with fleshing out an individual and preoccupied with displaying a culture as a whole, of which they do an excellent job. In fact the same could be said for the film as a whole, because while ‘Kundun’ features some mightily impressive set features and remains painstakingly true to its own vision throughout, ultimately it feels more like a string of episodes than a cohesive plot. The end result is that though the films many extravagant visuals paint a picture of a society on the brink of social upheaval, and the man that they look to for guidance, as far as story and characters go the film can be frustratingly unfulfilling for all its impressive aspects.


Despite being more concerned with its culture than its characters there is still a lot to admire in the visually elegant ‘Kundun’.