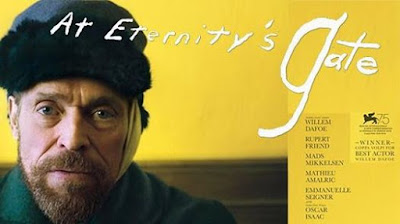 "Sometimes they say I'm mad, but the grain of madness makes the best of art."

There are any number of tonal approaches one can take when recounting the life of a famous figure. You can focus on their achievements and fame or downplay that in favour of focussing on their own personality, you could specify on their place within the broader scope of art and the legacy of what they brought to the field or try to observe them in a vacuum with the attention being placed on them as an individual. You could even negate telling a more cohesive version of their life story in favour of simply capturing a mood of what it felt like to be that person.

Concerning the final years of artist Vincent Van Gogh (Willem Dafoe). Living in southern France Van Gogh is in the midst of a creative outpouring as he constructs many of his most recognised and enduringly popular works. However amid this plethora of talent is a deeply troubled and tortured persona, as his life is plagued by poverty and mental illness in a society that regards him as a failure and a madman.

Van Gogh often typifies our cultural image of the tortured artist, a figure whose genius is misunderstood by the world around them and whose suffering in turn forms the substance of their art. That broader perception of Van Gogh seems to be an essential element to ‘At Eternity’s Gate’ as director Julian Schnabel takes the famous artist as a figure for what it means to be truly isolated and out of touch with all around you, to find the empathy of others only in fleeting moments and to strive towards your creative calling when all around you insist otherwise. He takes the story of the most famous painter in history and frames it a manner that is both specific and universal.

It is not a conventional biopic, unconcerned with recapping the known points of a famous life. Instead ‘At Eternity’s Gate’ is concerned with the process of its subject and the underlying values he holds that define his life. Several times through the movie Van Gogh is asked why he paints and his response is that he could not live doing anything else. After inhabiting his space for the length of this film it’s hard to disagree with his statement, you feel completely in tune with Van Gogh’s search for meaning and desire only to further his art.

That intimate feeling comes through in Schnabel’s direction just as much as the screenplay. His camera moves ostentatiously but is always intensely focussed on Van Gogh as a subject, remaining close to his facial expressions and reflecting his own point of view. In moments of emotional instability the camera moves more violently as if the world itself has lost all control just as the artists own psyche has. Through its visual prowess ‘At Eternity’s Gate’ masterfully translates the shifting attitudes and emotional state of its subject before even a word has been spoken.

Obviously a film concerning one of the most acclaimed painter of all time would be expected to have stellar cinematography, which ‘At Eternity’s Gate’ most certainly does. The colour palette reproduces the moods and shades of Van Gogh’s paintings, emphasising the rays of light and lines of motion within each frame. The DP Benoit Delhomme brings a majestic sense of freedom to each image, filling every wide shot with an expansive view of the landscape the makes you understand why Von Gogh was so intent on capturing it through his art. 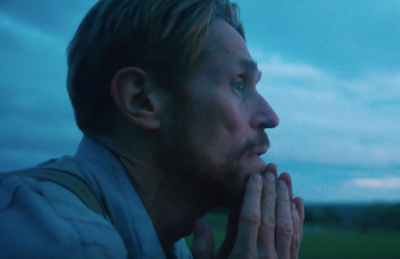 Such an intensely focussed view allows the film to be a stunning showcase for its lead performer. At 63 years old Willem Dafoe is almost a full three decades older than Van Gogh upon his death, but in a strange way it works for the portrayal at hand. Dafoe’s age bestows a sense of world weariness to Van Gogh, as if his mental torture has taken on an exterior form. It furthers his alienation from the world around him. That being said, Dafoe’s performance is phenomenal enough to justify the age gap regardless. It is both immensely powerful and appropriately subtle, not reducing the artist to a series of emotional outbursts but instead conveying the more deep seated dread that permeated his life every day. It allows him to channel the momentary emotions Van Gogh felt in his lifetime as well as the deeper philosophical ponderings that would risk feeling overly obtuse in the script, but through Dafoe’s performance become utterly engrossing.

Though Dafoe is very much at the heart of this film and the only actor required to give a performance of great depth, the supporting cast are excellent at reinforcing this singular vision of Van Gogh and how he relates to the world. The always terrific Oscar Isaac serves as one of the few people the painter can relate to with his portrayal of artist Paul Gauguin. Another sympathetic voice is Rupert Friend as Vincent’s brother Theo, while his sparse appearances would make it inaccurate to say that Theo and Vincent’s dynamic if a major narrative point of the film the scenes that feature the two of them does make for some of the film’s most emotionally resonant moments. Meanwhile Mads Mikkelsen only appears for one scene yet his role is still vital to the film’s overall conceit, a part that Mikkelson delivers with ease.

Schnabel does risk becoming overly repetitive as the film progresses, repeating the same philosophical talking points. But that does stress the significance of those talking points in how they drove Van Gogh’s motivation to paint. The film elevated in how it skips the usual dramatic points of a conventional biopic in favour of the more nuances approach to exploring its subject. A prime example of this would be to take note of how the film omits to show Van Gogh’s self-mutilation of cutting off his ear, instead only focussing on the build-up and aftermath of the incident. It is not a film concerned with simply restaging or recounting the artist’s life, instead it seeks to capture a prevailing atmosphere and outlook that defined his life. In other words it is not about what Van Gogh painted, but what he could see.

A poetic and visually expressive portrayal of an artist’s life that features a truly phenomenal lead performance by Willem Dafoe.