2001: A Space Odyseesy - The Symmetry of Plot and Theme 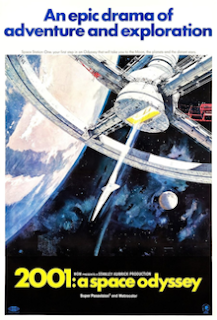 I always like to think of movies having two separate stories. There’s the narration, and then there’s the narrative. Narration covers what is being told, and then the narrative covers how it is being told. Few movies have their narration and narrative in such synchronicity as Stanley Kubrick’s ‘2001: A Space Odyssey’. On the face of it this is a movie that shows some apes learning how to use a bone as a tool, then some astronauts finding a monolith, then a computer that goes wrong, and then a trippy light show. That’s the narration of this movie, and over those strange series of events Kubrick instils such meaning and mythic weight that the narrative covers the very essence of humankind, as well as far beyond that.

I understand that’s fairly hyperbolic but the fact is that entire essays have been written about the individual shots and edits of Kubrick’s film, so to try and cover every piece of potentially meaningful symbolism over this 141 minute work of art is neither original nor entirely possible. There’s so much to derive from ‘2001’ due to the sheer broadness of its themes and the magnitude of its ambition.

That being said though, at the same time there’s no wasted shot within the movie. No aspect of it exists for obligatory reasons. Every single frame of the movie has something to comment either upon the basic plot as it unfolds or the grander themes of what Kubrick is trying to say, but most of the time these shots speak to both of those aspects. Part of understanding the movie is understanding precisely what Kubrick wanted to achieve, but I think more than any basic allegory or symbol, ‘2001’ exists to be awe inspiring on the most fundamental level. You don’t need to grasp the metaphors behind each shot, but simple be capable of processing and absorbing them for their emotional weight.

Those shots in question are truly astonishing. Meticulously framed, artfully composed and painstakingly symmetrical. Each image communicates so much about the underlying themes of the film with barely a word spoken. The tranquil way in which the film depicts space travel is in stark contrast to the barren chaos of the Dawn of Man sequence. The mundanity of this technologically advanced life and what it implies about the way these human characters now interact with one another. It’s almost as if the slow pacing of the film and those long, lingering shots of empty space encourage the viewer to ponder over what they are witnessing.

Contrary to almost any other science fiction film, ‘2001’ doesn’t accompany its images of technology and space travel with music that echoes the beats of the visuals. Instead of enhancing the action of the scene, the classical music almost puts up yet another barrier to the viewer’s engagement in the moment. The music exists outside of the action and renders the visuals as part of some grander contemplation. When watching the film it’s hard to find yourself appreciating it both on a technical level and a thematic one. There’s a truly transcendent nature to those mesmerising special effects and the sublime music that accompanies them. 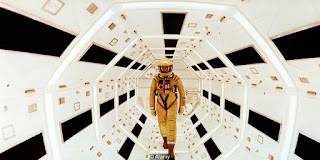 Just as so much of the film is dominated by incredible music, large portions of it are weighed with a heavy silence. There’s something about the emptiness of the film’s sound at certain points that evokes such a sense of fear or intrigue when Kubrick wishes it so. As a filmmaker Kubrick is often hailed for his ambiguity in storytelling but I think he is just as effective at manipulating his audiences through the ways that are unique to cinema. Without knowing anything about the monoliths anyone watching the film for the first time can still be struck by a sense of immense anticipation through the movie’s ominous accompanying music. Then there are those static close ups of HAL which have no sound save for some faint electrical hum and whose only image is that non-blinking artificial red eye, and yet that gives off a palpable mood of dread.

What exactly any audience is supposed to ponder is unspecific to say the least. But it’s that very ambiguity to ‘2001’ that makes the movie so remarkable, both in terms of its plot and themes. There are no easy answers to the many questions its story raises, from the origin and purpose of the monoliths, the reason behind HAL’s malfunction or what precisely Bowman experienced on his voyage beyond Jupiter. All of that is without even attempting to address the nature of the film’s iconic final shot. But just as the narration leaves much to be desired, so does the narrative. It’s almost impossible to assume exactly what Kubrick wanted to say with this film. Its themes of technology, evolution and humankind’s search for meaning in the cosmos are all heavy subjects that the film offers plenty of commentary on, with no solid answers.

There’s any number of ways ‘2001’ communicates said commentary. From the shot composition to the story structure, but perhaps most of all through the editing, it seeks to make its intent and message clear to the audience. The movie contains the most famous edit in the history of cinema, through a match cut between a primitive human’s tool and a highly advanced object in space. It’s the purest form of intellectual montage, deriving meaning from the collision of two unrelated objects. From the bone to the spaceship we go from the earliest tool to its most advanced, spanning millions of years in the process. Kubrick never explains precisely what the object floating through space is. It could be a tool, a weapon, or both. Just as the bone was a tool that became a weapon, so too could the object in space. Is there even a difference between the two terms?

You could look later into the film at HAL as further proof of this. Just as the super computer was once an object for the benefit of the astronauts, it suddenly becomes their greatest threat. Even in 1968 the notion of humankind’s destruction being one of our own making was nothing new, so HAL’s place within the story and what he represents isn’t a simple cautionary tale as much as it is an allegory from which the viewer can derive whatever they want to. After all Kubrick was never one to talk down to his audience or lecture them.

When ‘2001’ first premiered it divided critical opinion. One of the common ways in which its detractors would mock to the movie was to point out how the computer was the most humane character in the movie. Obviously there are absolutely correct in this observation, but miss that it is one of the central points which the movie is trying to make. Throughout the movie the interactions between the human characters seem stilted and artificial, more of a formality than anything else. Not only does this blur the line between man and machine but it also speaks volumes as to how in this future human interaction has been altered by the presence of technology. Good thing that hasn’t happened in reality, right…..

As I said earlier, Kubrick was never one to deliver some simplistic “technology is bad” message. Just as he observes the differences technology has made to human interaction he’s also keen to observe the ways in which the humans of the story are still in tune with their ancestors. As the astronauts approach the monolith on the moon the framing of the scene purposefully feels reminiscent of the primitive apes who approached the one on Earth.

The film also seems eager to note that it was only because of these technological advances that the humans were even able to reach the monolith on the moon in the first place. Perhaps that is another reason why it indulges on this technology for so many lengthy shots throughout the story. It’s through the achievement of space travel that humans make it to the moon and decipher that it is directing them further into space towards Jupiter, framing technology as a natural part of human’s evolution. But then to reach Jupiter the humans have to literally overcome the technology they themselves created, personified by HAL, in order to evolve further.

The confrontation between HAL and Bowman that supposedly serves as this allegory for the relationship between humans and technology stands as a key example of what I was referring to when I said the content of ‘2001’ exists on two levels. None of the events that depict Bowman trying to overcome HAL is displayed in a traditionally action oriented manner. Kubrick’s camera is less static but that is essentially the biggest difference as the stakes continue to rise. On the one hand there is definitely an air of tension to Bowman’s struggle for survival, but more than that is the way in which the film seems more concerned with the broader thematic consequences of what is transpiring. 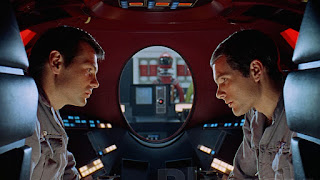 The most meaningful part of Bowman vanquishing HAL is the computer’s ominous voice that continues to try and converse with the human as he goes about shutting down his adversary. The computer begs for its life and confesses its fear of death, while the human methodically terminates it. Considering HAL’s mutiny against the human crew was preceded by Bowman and Poole contemplating shutting the computer down, one could argue that it was acting out of fear and self-preservation when it tried to eliminate them. There’s no triumphant or cathartic feeling to Bowman surviving, just more questions for the audience to ponder over.

So I could very easily give a specific interpretation of what everything in ‘2001’ means. There’s the notion of the monoliths acting as guides for humankind’s next stage of evolution that can push them to higher levels of intelligence, from apes to humans and then floating space babies. Perhaps they were planted by some alien entity that was testing humanity or observing them in some shape or form, and Kubrick could very easily have added that as an explanation if he wanted to. But to place any definitive meaning on the film would rob it of so much mystery and intrigue. Kubrick wanted to make a film that could stand as a work of art, one that spoke of humankind’s evolution and journey through the cosmos in a way that was unique to cinema. That theme is one that will never have a definitive answer, so why should anything attempting to address that theme be any different?
Posted by Joshua Price at 18:47