"I just don't want to put anymore stress on the family."

I think there’s a level of disparity in terms of what modern audience perceive horror to be. Like any genre it’s impossible to make a generalisation about whether or not it’s descended in quality as a whole, but I can wonder why it’s become more difficult to define horror in any traditional sense. Personally I find horror to be at its strongest when it reaches the viewer on a psychological level as well as a visceral one. But then again don’t dramas do that with their depiction of grief and emotional suffering? This brings me onto ‘Hereditary’.

When her domineering and controlling mother passes away, Annie Graham (Toni Collette) works to maintain her family’s structure as her husband and two kids each cope with the loss. But Annie begins to unravel cryptic and disturbing secrets about her family’s ancestry, and amid the shadows of the past also lie a turbulent conflict within the family that threaten to consume the entire household.

Another key aspect about horror is trying to find a universal sense of fear to tap into. For all the visceral shock you can inject into a movie that will terrify one audience member, you are just as likely to find another that will be undeterred by that same aspect. This is the foremost reason why I believe that horror needs to reach deeper than just an initial shock to feel truly resonant. It has to embody an empathetic sense of fear that can hold a presence within the mind of the viewer. ‘Hereditary’ achieves this more capably and confidently than almost any other horror film I have seen in recent years.

For a majority of Ari Aster’s directorial debut you will not experience jump scares or sudden impacts. But rather a seeping and all-consuming sense of dread that permeates every aspect of the final product. There are so many framing and compositional choices that simply feel unnerving by design, so many moments of deathly silence that evoke an air of suspense and an unwavering tone of dread which repeatedly assures the audience that every place they once thought was safe is not.

There is an upsetting quality to the fear of ‘Hereditary’ that distinguishes it as a deeply powerful work of filmmaking. Much in the same way that William Freidkin took a story of demonic possession and framed it as a story of a mother watching the unbearable suffering of her only child in ‘The Exorcist’, Aster takes the supernatural trappings of a horror film and stages it as an unspeakably troubling family dynamic. He bestows his characters with depth and emotional resonance, only to then rip their lives apart piece by piece. The result is pure emotional devastation that is made all the more affecting by the primeval terror the supernatural elements of his story evoke.

Much of that emotional output is conveyed by the performances, which are phenomenal in of themselves. Though creepy children are a trope of many horror films, Milly Shapiro’s performance is chilling enough to make one forgive the cliché. Her vacant stares and incessant characteristics give the character an almost otherworldly presence. There’s a desperation to Alex Wolff’s performance that is just as unsettling as the events that occur to his character. Then there is Toni Collette who displays a masterful balance, much like the film as a whole, in conveying of the momentary horror being experienced by the character with the deeper existential angst that makes said horror feel long lasting. Through her depiction of Annie you get a clear outline of her progression across the movie as her grasp on reality slowly deteriorates and the defences around her fragile emotional state gradually crumble away. 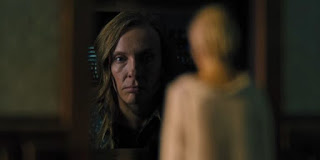 The sound design of 'Hereditary' is fantastically evocative, creating a pulsating rhythm that hangs over the certain scenes like an ominous shadow. Speaking of which the lighting within the film also does brilliant work to communicate to the audience that something is truly deeply wrong within the story without overtly stating it, which in turn only increases the irrational paranoia that plagues every character within the film. The cinematography is also stunning, framing picturesque shots that make the violence within them so much more unsettling. It conveys its story through a pure visual medium so confidently whilst also leaving a suitable amount of ambiguity. As upsetting as 'Hereditary' is part of me is also looking forward t revisiting it and uncovering the hidden nuances within its script and direction.

Throughout the film Aster’s camera takes on an omnipotent presence within the lives of Annie and her family. It glides smoothly through their house as if watching from afar, but also never hesitates to observe their pain in excruciating detail. With each new trauma comes a wave of emotional expression which is often the most excruciating aspect of the film. The film is structured so as to fit these surreal horror elements into the gaps left by relatable family drama which just allows it to tap directly into a viewer’s inner fears. Having dragged you into its dreamscape, Aster refuses to release you until this nightmare has reached its crescendo.

When ‘Hereditary’ does reach its climax, it embodies a such an intense level of insanity that the tonal shift alone is unsettling. If the movie seems slow during its first half it is because Aster revels in using suspense to imply something unimaginably horrible is about to happen, playing with our far of the unknown. But then during its third act ‘Hereditary’ presents us with a series of events that are indeed more terrifying than anything we could have envisioned. Not just for the supernatural torment they impose, but for the sheer psychological damage they inflict upon the characters and ourselves.

‘Hereditary’ is a uniquely terrifying horror movie, one that is truly upsetting in a manner so powerful that it can be classed as a horror by merit of its emotional trauma alone.