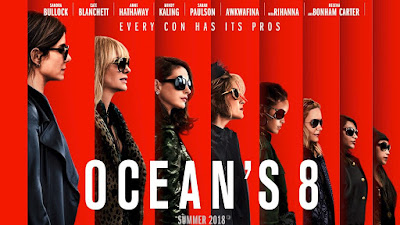 "Is it genetic, are the whole family like this?"

As far as gender swapping reboots go, ‘Ocean’s 11’ seems more open to that possibility than other franchises. As a series it’s always held a more playful tone which can be built upon in any way by the filmmakers. The 1960 original was little more than an excuse Frank Sinatra and co to hang out and drink for a few months, whereas Soderbergh’s two sequels were the indie director experimenting in regards to how far he could delve into experimental filmmaking under the façade of a blockbuster. The 2001 film ‘Ocean’s 11’ is the only substantial benchmark this latest instalment has to live up to.

Freshly released from prison, career con artist Debbie Ocean (Sandra Bullock) has her eyes set on what will be the biggest heist of her life. Hoping to get away with $150 million worth of jewellery she assembles a team made up of the best people in the field. The task is elaborate, risky and has been in the planning process for five years, eight months and 12 days.

Another benefit that ‘Ocean’s 8’ has is that the fanbase of this franchise are evidently not whining man-children who seem to think that the release of a movie no one is forcing them to see is destroying their childhood, or at the very least way less than the ‘Ghostbusters’ franchise seemed to have. Soderbergh’s ‘Ocean’s 11’ is unquestionably great, and any attempt to reinvigorate this series will not eradicate the original. If anything it’s very clear that the makers of ‘Ocean’s 8’ adore that 2001 film, if anything perhaps a little too much.

‘Ocean’s 8’ certainly succeeds at being a fast paced and thoroughly entertaining piece of genre filmmaking, mimicking the playful attitude of Soderbergh’s heist classic excellently. But where it falls short is how it comes across as a hollow recreation rather than a unique product of its own. Rather than embrace its own identity the movie just tries to recreate the pace, structure and general style of ‘Ocean’s 11’. It’s not just the overall narrative or broad stylistic choices either, quite often the movie’s very shot composition is practically identical to the set up Soderbergh employed back in 2001.

The only area in which ‘Ocean’s 8’ fails to match the atmosphere of its predecessor is in the little transcendent touches that have made ‘Ocean’s 11’ ageless. They are not even touches that I necessarily noticed prior to watching Gary Ross’ film. You won’t find moments of beauty like the Vegas fountains in this movie, everything is efficient and to the point but loses some of that wonderful depth in the process. It takes the broad strokes of Soderbergh’s film and repainted it with some surface details. But there’s no substance to make me see ‘Ocean’s 8’ as the individual entity it wants to be (side not, am I mentioning the name Soderbergh too much for a movie he has nothing to do with?).

So if I can only judge the surface elements as inherently new factors within this movie, what does ‘Ocean’s 8’ have to offer? Well those surface elements in question are highly entertaining. In choosing a cast to lead this caper the filmmakers have done a spectacular choice. The group has a wonderfully engaging dynamic and each member has enough individual presence to set themselves out as memorable aspects of the ensemble. 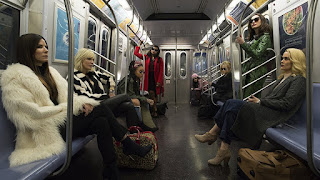 Sandra Bullock manages to ground Debbie Ocean in a way that makes her place within the movie act as a unifying force. All of these differing personalities never feel at odds when Debbie is there to provide a sense of cohesion as she gradually assembles her team and brings her plan into action. Cate Blanchett is as charismatic as ever, and Sarah Paulson makes for a fantastic addition as well. There’s also a lot to be said at how well Anne Hathaway plays what is essentially a riff on the way most people seem to perceive Anne Hathaway. Whatever the trope is actually designated as, she fills the role perfectly.

In fact the way ‘Ocean’s 8’ seems to actively flaunt it’s own breeziness makes me wonder if the film ever aspired to reach the heights of its predecessor anyway. The overall pace and structure of the film is so light and playful that it’s hard not to be swept up in the caper and not worry in the slightest regarding a lack of depth or development. There’s a noticeable affinity for light storytelling throughout the movie. It aspires to be popcorn entertainment and achieves that moderately well, so while I could raise issues relating to a discernible lack of substance I also have to wonder if there’s any real point. It’s simply not what the film aimed to be.

After all what else are the ‘Ocean’ movies if not a conceptually pleasing idea elevated by style more than anything else. It’s that area where the stellar chemistry between the cast and lavish production design that surrounds them. The locations, sets and costumes are all wonderful to behold and help make the movie a visual treat. While the cast never fail to make each scene feel engaging just for their presence alone.

Stylish and upheld by its stellar cast, ‘Ocean’s 8’ may be lacking that extra something special to elevate it beyond simple entertainment, but it still offers plenty of fun.