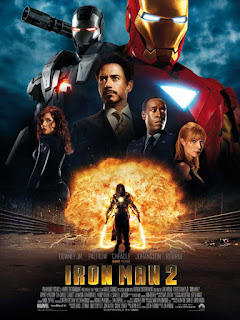 There are any number of viable options from which to tackle a sequel to Jon Favreau’s 2008 blockbuster ‘Iron Man’. The ending of the first film created an environment of consequences in which the archetype of the hero they established would now be facing challenges that, as far as I’m aware, haven’t been explored in any other superhero movie before. It’s really a shame then that ‘Iron Man 2’ takes that foundation and ultimately does very little with it.

But I’ll say some nice things first. Much like the first film the performances elevate ‘Iron Man 2’ to a higher level. The cast are all highly committed and capable of conveying a strong sense of characterisation with how they portray each member of the story. Robert Downey Jr is just as much of a tour de force here, though his performance is slightly hampered by the fact that the script doesn’t allow for any cohesive development from Tony Stark. In this movie he’s more of a reactionary figure rather than an instigator which robs him of a lot of the urgency the first film granted. But he’s still charismatic, deftly balancing the character of Stark on the tightrope between arrogance and confidence.

The supporting cast are also enjoyable to behold. Sam Rockwell is unquestionably a highlight as much like RDJ he brings this immensely watchable sense of arrogance to his role that if anything I wish the script had allowed him to lean into more since unlike RDJ he can embrace the role of the antagonist. It’s actually not difficult to see why Rockwell was briefly considered for the role of Stark back in 2008. Mickey Rourke is also appropriately menacing in the part of Whiplash. Sam Jackson’s performance adds a level of intrigue through his introductory appearance as Nick Fury, and Scarlett Johannsson’s first outing in the MCU leaves an impression. These are all entertaining performances on a surface level, but the script sort of abandons them and treats them more like props that developed characters.

If you are noticing a through line with my praise of this movie then that’s because it’s difficult for me to avoid the simple but detrimental issue within ‘Iron Man 2’. The script introduces many compelling aspects to the narrative without ever actually developing them. This applies to the characters, the plot, even the very themes and conceits of the movie. The consequences of Tony’s actions in the first film are addressed but they are also kind of blown over without any cathartic resolution. The same goes for every plot detail that the script brings up. 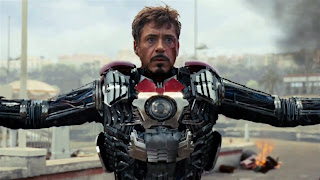 From Tony trying to reconcile with the memory of his father, joining the Avengers Initiative, his business rivalries, issues with the government and the fact that he spends most of the movie thinking he is terminally ill. None of it ever feels developed or even explored to a point beyond when the script finds it most convenient. Each of these subsequent problems is part of the narrative until the script conveniently puts it aside. What makes it even worse is that the script can’t even address these various plot points at the same time. It has to put each one on hold to deal with another narrative thread only to then repeat itself in the exact same manner for the entire movie.

The end result is a movie that feels cluttered in almost every regard. As I said before even the performances can’t help but feel weighed down by the sheer amount of content the script wants to burn through without developing any singular aspect. Favreau’s direction manages to tie everything together with a consistent visual style, but it also feels overwhelmed by the various narrative threads constantly being hurled towards it. The movie comes off as less of a story and more of a checklist that serves to tick each consecutive box as it stumbles forward.

Honestly I can’t think of a great deal to say about ‘Iron Man 2’ since every facet is plagued by this one issue. It’s not a case of many specific problems but rather one overbearing weakness in the script that seeps into every aspect of the filmmaking.