Recapping the MCU - Guardians of the Galaxy 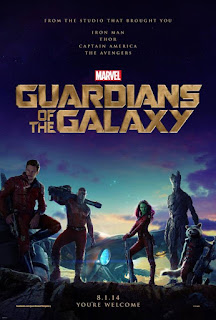 It’s always intriguing to wonder just how well a proven franchise could do based off its own merits. If they could just detach themselves from their brand name and make a movie that would have to stand on its own as an entertaining and worthwhile experience. Now obviously it’s hardly accurate to say that Marvel did exactly that in 2014 since they were a proven commodity with a widely established fan base, but even to the studio that had released one of the biggest films of all time, a project as unknown and as frankly weird as ‘Guardians of the Galaxy’ seemed like a long shot.

Even if you were someone that entrusted yourself to the MCU in 2014, it’s highly dubious that you had any knowledge relating to this particular property. After all most of us had only just finished memorising our routine to pretend we knew who that purple guy at the end of ‘The Avengers’ was (it’s….Thanos, right?). But the idea of a crafting a movie around the star power of that guy from ‘Parks and Rec’, 2009 Uhura, a former wrestler that isn’t The Rock, a talking racoon and a sentient tree….well obviously works as a recipe for box office success, of course.

The point of all of this is that the success of ‘Guardians of the Galaxy’ really is a testament to how well James Gunn’s film was able to introduce an entirely new cast of characters and make them resonate with audiences across the world. Much like Joss Whedon did two years prior, Gunn structures his film around the idea of these talented but flawed individuals learning to join together. Their unification is so cathartic because it’s built into the foundations of how the film progresses and flows. He uses his wide shots that feature all of the Guardians as sparingly as he can, so as to create a genuinely fulfilling reaction on the occasions when they are all occupying the same shot.

If any superhero movie has been so utterly elevated by the talent of its cast more than ‘Guardians of the Galaxy’ then I simply haven’t seen it. Every actor bursts onto the screen in a role that is both larger than life but also achingly human. We come to understand Peter Quill’s insecurities just as much as we love his brashness, the self-identifying ‘Star Lord’ line starts as a punchline and ends as a heartstring. Chris Pratt embodies both moments flawlessly, possessing such an acute sense of comedic timing whilst also being fully capable of making the sincere moments land as they should.

The same goes for all of the Guardians, though none of them are explored to the same degree as Peter. But the film makes such an effort to draw a connective line between the characters backstories and their current actions that it’s easy for the likes of Zoe Saldana, Dave Bautista, Bradley Cooper and Vin Diesel to turn a quirky trait into a microcosm of tragedy. With the Guardians dominating the scenery so much it’s understandable why Lee Pace to take a more measured approach. Despite Ronan the Accuser being one of the weaker MCU villains his dynamic with the protagonists is used to great comedic effect. 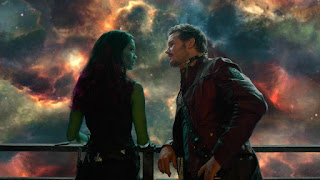 But ultimately that sense of sincerity works so well within ‘Guardians of the Galaxy’ because Gunn genuinely believes in it. So many writers try to shoehorn in an aspect of earnestness within their scripts only for it to fall flat because of how obvious it is that it’s an afterthought. But Gunn weaves these genuine emotional beats throughout his screenplay. He clearly has a deep affection for these characters he has built up, so feels a sense of responsibility for how their development is handled across the movie.

The reason those emotional beats feel so earned is also due to how well Gunn’s writing draws the audience in. His humour and energetic pacing keep the audience’s attention in a way that never feels desperate. It speaks volumes that Gunn was able to open his movie with a highly traumatic portrait only to then launch into high concept space adventures and never risk feeling tonally inconsistent. His dialogue is sharp and witty, but also loud and brash when the mood requires it. More than anything else it shows the deft touch of a writer who is confident in his characters and understands how they would interact with one another. Humour can’t feel out of place if it is the logical response a certain character would have to a particular scenario, and Gunn writes his way into accommodating both of those factors.

‘Guardians of the Galaxy’ is at its least interesting when it tries to tie this story into something larger. The deviations it takes to explain how exactly this fits into the broader context of the MCU do slow the film down somewhat, whilst also feeling more like blatant exposition than the more naturally conveyed plot mechanics at other points throughout the movie. But despite flaws there really isn’t anything that could lessen the sheer entertainment that this film brings. Certain critics have been accused of going easy on Marvel just for the sake of entertainment, but I wouldn’t argue for that being a bad thing. After all if I had as much fun with every movie as I did with this one, I’d be inclined to be positive more often as well.