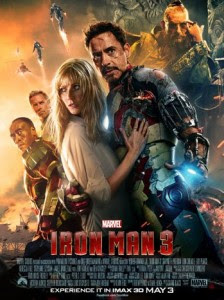 I always find it best to think of ‘Iron Man 3’ more in terms of it being a Shane Black movie rather than as a Marvel movie, because it works much better under the circumstances of the former rather than the latter. In the grand continuity of the MCU ‘Iron Man 3’ has wlays been somewhat of an outlier, hardly ever referenced and rarely acknowledged which I think is due to the studio not really knowing how to go about taking its events into account in their franchise. But as a Shane Black movie it’s everything you could want from a superhero film directed by Black.

I think this dynamic of Marvel/Black is best exemplified by the Mandarin twist. I have to deal with it right away because it’s the elephant in the room, the make or break point for many MCU fans and how they decide the judge this movie. On the one hand, I fully accept that the Mandarin is a character with a long and highly interesting history that is now wasted in the light of this storytelling decision. However, putting the source material and the “what could have been” attitude aside, I think this is pretty interesting twist. In an era where so many comic book movies are hampered by this obligation to serve their fans, it was refreshing to see Black throw that out of the window and treat the characters in whatever way he saw fit for his story.

That attitude bleeds into almost every aspect of Black’s screenplay and direction. He wants to tackle this latest outing for Tony Stark as less of a chapter and more as a singular entity. It’s why he chooses to establish almost every issue that drives the narrative within this film, and then refuses to carry anything over into a potential sequel. In a certain sense that works to create a cohesive and contained narrative, but as I said it also serves to make the movie feel tonally jarring from the rest of Marvel’s catalogue, including the preceding two ‘Iron Man’ films.

Even the basic psychics and logic of this movie seem different to the rest of the universe, from Tony supposedly being arrogant enough to outright challenge the Mandarin to a fight by giving him his own address (it’s not so much the challenge that annoys me but the fact that he issues it and is then totally surprised that a bunch of gunships arrive to kill him) or how destructible the suits are. But again, these are inconsistences in the franchise, but not within how the film establishes itself within the first act.

That being said, even as a singular entity the film has some issues in how it paces itself. The second act drags and in retrospect is mostly forgettable. The script only addresses certain issues when it’s convenient and this creates a sense of inconsistency in terms of when each character’s issue will affect the plot. On top of that some of them are not resolved as much as they are made redundant. Tony’s PTSD seems to take a backseat two thirds of the way through, his history with Killian does’t feel like a prevalent part of their interaction and he spends so much of the movie separated from Pepper that it’s hard for their relationship difficulties to feel earned or developed. 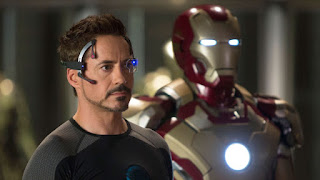 But there is still so much to enjoy and admire within ‘Iron Man 3’. Every action scene is utterly spectacular and contains a level of grounded intimacy not usually found within the MCU’s bigger set pieces. Amid all of the chaos it’s always a character that our focus is rendered to rather than just empty spectacle. The action also does a brilliant job of conveying some of the movie’s better developed themes. For instance, the Mark 42 armour is repeatedly framed as a symbol for Tony’s self-destructive inner demons only to then be used as a way for him to destroy the external demon that is Killian.

Black also injects a lot of his own humour and stylistics into the movie that make it feel more at home as part of a trilogy with ‘Kiss Kiss, Bang Bang’ and ‘The Nice Guys’ than to the prior Iron Man movies. Black takes great measures to keep Tony out of the suit as often as possible which I think serves two functions in his film. Partly to highlight the character riven journey that underpins the film’s main sense of development. But on top of that I wouldn’t be surprised if it was just to serve as a means for Black to frame Tony and his armour as completely separate entities, almost as if they’re part of some overblown buddy cop movie. They even share a dynamic that wouldn’t be out of place in that genre.

There are some misplaced and misused characters that hamper the otherwise excellent performances from the cast. As I said earlier Pepper is side-lined and separated for a good portion of the movie so Gwyneth Paltrow can’t help but feel like an afterthought despite a decent performance. Ben Kingsley does such brilliant job pulling off the threatening persona that it’s a shame when the rug is pulled out from underneath us. Guy Pearce’s persona seems to change so often and so radically that it’s hard for the actor to get a cohesive grasp on proceedings even if he executes each one decently. But amid all of this we can count on Robert Downey Jr to once again dominate the movie as he brings Tony Stark to life in a way only he can.

Functional as a Shane Black movie but problematic as a Marvel film, ‘Iron Man 3’ is a mixed but highly entertaining bag.